Dr Brian Seneviratne, 81-year-old Australian human rights activist of Sinhala origin steadfastly fighting for the rights of Tamils in the island of Sri Lanka, was deported by Singapore immigration on 14 December, when he came from Australia to go to Malaysia and address closed-door meetings on the push factors of refugees coming from the island via Malaysia and their handling by Australia. In a letter addressed to Australian Prime Minister, Ms Julia Gillard, raising several questions on the modus operandi of his deportation by Singapore defying a State’s obligation to the international rights of any person, Brian identifies the Government of Sri Lanka and the Government of Australia as the ultimate beneficiaries of his deportation.

“Who was responsible: that, Prime Minister, is for you to find out. As a lawyer you should be able to ask the correct questions – “who would be threatened by what I had to say in Malaysia”? The possibilities are limited,” Brian wrote, summing up the possibilities: 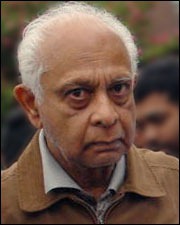 Brian, according to his letter, was kept locked in a room at the Changi Airport for 5 hours, denied of toilet facilities, food and communication, deported by an ‘armed guard’ leading him into the aircraft and was given with his passport back only in Australia.

He was served with a deportation letter stating: “This is to inform you that you are refused entry into Singapore for being ineligible for the issue of a pass under current Immigration policies.”

Singapore may have its ‘sovereignty’ to refuse entry to any one. But if a citizen of one country is denied of transit rights through a second country, at the request of a third country or countries, then it raises serious questions on the individual international rights of all humanity in the clutches of States, human rights activists commented.

Brian was not even permitted to travel back according to his schedule, via Indonesia, but was deported to Brisbane.

As an Australian citizen, Brian urged the Australian Government to ask 17 questions at the Singapore Government that had deported him. The last of the questions was: “Did Rohan Guneratna , the supposed ‘world expert on terrorism’, a Sinhalese, working hand in glove with the Sri Lankan government, who is employed in Singapore, have anything to do with the deportation?”

Singapore Government as well as several corporates and individuals from the country enjoy active trade contacts with the genocidal regime in Colombo.

Many countries that uphold the genocidal regime in Colombo, including a power in the region that is in complicity with it, are suspected of receiving lists from the regime, on people who should not be given entry into those countries, informed sources said.

Brian’s case is an illustrative example for the extent of importance given by the Establishments to the genocidal experiment of World Order taking place in the island at the cost of Eezham Tamils, while on one hand doing everything to suppress information and on the other shedding crocodile tears that the island is not getting enough world attention, human rights activists commented.

Office of the Prime Minister

I am an 81 year old Consultant Specialist Physician, who has been an Australia citizen for 36 years. I have had a long-standing interest in human rights, in particular, the unresolved problem of asylum seekers and the way they are treated.

I have been particularly concerned about the so-called ‘push-factors’ which make people seek asylum in Australia and other countries.

The problem of asylum seekers trying to get to Australia has also created problems in Malaysia and Indonesia. Moreover, as you well know, there have also been attempts to use these countries (and others) as off shore detention centres for asylum seekers. This is illegal.

Concerned Malaysians invited me to address two meetings in Malaysia (15th December 2012 in Johor, and the following day in Kuala Lumpur). Since Johor is literally next to Singapore, it made sense to fly to Singapore and take a coach to Johor.

On arrival in Singapore on the 14th December (today), I was refused admission, held incommunicado in a locked room for five hours without even basic amenities such as food or water, or facilities such as a toilet, and deported by an armed policeman to the flight back to Brisbane.

My request for the return of my passport, a fundamental right, was refused. It was only given back to me in Brisbane, and that too after a significant delay.

Singapore refused my right to travel to Malaysia or to Indonesia, which is not only high-handed but illegal. Singapore could stop me entering that country, but had no right to stop me from getting to another country.

This is a serious problem that has already generated national and international concern. I hope it will be taken up in the Australian parliament after the recess.

I am entitled to an explanation. As a citizen of this country, and you, as the Prime Minister, have a duty to get this for me, if being an Australian citizen is to have any meaning.

The date of this letter is correct since it was written on the way back home. The delay in sending it to you is that I have rarely written a letter in anger, but have allowed a ‘cooling off’ period to lapse, and to also try and make sense of this senseless act.

I will set out in detail what was done to me. I will first give a brief account of who I am and what I was trying to do. This should not be necessary, since no citizen of this country should be treated like this.

In March 2009, when I was returning to Australia after receiving a major international award for human rights in Canada, I was told that there were hundreds of people in Malaysia who wanted to hear me. Would I stop over in Malaysia to address several meetings in Kuala Lumpur and in Penang? I said I would. Police permission was obtained for these meetings.

Here is the Canadian Award they referred to:

In accepting the Award, I chose to speak on:

“Peace with Justice in Sri Lanka. Genocide of Sri Lankan Tamils. Its Causes and Solutions”.

Canadians for Genocide Education consists of some 46 groups, which include the Buddhist Communities of Greater Toronto, the Canadian Islamic Congress, and many others. Here is the contact: [email protected]

However, when I arrived in Kuala Lumpur on 27th March 2009, I was held at Immigration for 7 hours and deported. The ‘reason’ was equally vague, “Your presence in Malaysia is a ‘security concern’”. It was unclear how a 79 year old man who had never handled a weapon in his life was a ‘security concern’ to Malaysia.

I was taken by six policemen (!), two security guards and as Immigration officer to the next flight to Brisbane. At least they gave me back my passport, which is more than what Singapore did in December 2012.

Investigating this, it was revealed that the Malaysian authorities were responding to a direct request from the then Sri Lankan Foreign Minister.

The Malaysian Award (which I could not collect) was posted to me. It was a pewter plaque:

With increasing concerns about what was going on behind the closed and censored doors of Sri Lanka which was responsible for the flood of asylum seekers/refugees to Malaysia, concerned Malaysians decided to invite me back to Malaysia to address two meetings in Johor (15th December) and Kuala Lumpur (16th December).

I have already explained why I was in Singapore – to board the coach to adjacent Johor (in Malaysia) to address the first meeting, and then proceed to Kuala Lumpur, address another meeting, and then fly out to Indonesia (for some medical commitments), and return to Brisbane on Christmas Day.

What was this all about?

As I have said, I was invited to Malaysia to address two meetings on asylum seekers, the push factors from Sri Lanka, and the problem of handling refugees/asylum seekers on arrival here via Malaysia or sent there by the Australian government.

These addresses were for an invited audience of concerned people. They were not public demonstrations or rabble rousing activities. Nor were they public appeals urging the people to storm the Sri Lankan Embassy. They were ‘closed doors’ serious discussions with much respected people of high standing in Malaysia.

The sequence of events

With an Australian passport, I did not need a visa to enter either Singapore or Malaysia.

What happened on the other side of the barrier in Singapore

I was not allowed to contact whoever had come to meet me in Singapore. I was later told what had happened.

Someone had flown into Singapore to meet me and take me to the coach. He came to the airport at 4.30 am, and waited for me.

Through the glass door, he saw the bags being picked up by the passengers. One black bag was going round and round on carousel 37. He tried to get to the bag to check the tag to see if it was mine. As he entered the area the alarm went off. Security came and asked him what he was doing. He said, “I am trying to see if that bag belongs to Dr Brian Senewiratne”. The official said, “I will check it, but you first get out of this area”. He did. The official checked the label and told him that it was mine. He asked, “So where is the passenger? The official said, “He has been refused entry into Singapore”.

He went to the information desk and asked to see the passenger list. The answer, “No. See Immigration”. He did, and confirmed that I had been refused entry. He asked, “Can I speak with him? Answer: “No” “Can you tell him that I am here?” Answer: “No”. In desperation, he asked, ‘So, what can I do?”. The Official replied, “Get lost”. That is Singapore in a nut shell.

There was one point which might shed some light as to who was responsible. When he came out of the baggage area, there was a crowd of men talking in Sinhalese. They had probably come to ‘welcome’ me and make sure I had not entered Singapore. Sensing danger, he hurried on (wisely).

Questions that you should ask the Singapore Goverment

That, Prime Minister, is for you to find out. As a lawyer you should be able to ask the correct questions – “who would be threatened by what I had to say in Malaysia”? The possibilities are limited.

I am forwarding a copy of this letter to Julian Burnside QC, who has been heavily involved with asylum seekers/refugees, to Geoffrey Robertson QC, London, a former Australian and now a leading British lawyer who has expressed concern as to what is going on in Sri Lanka, to Senators Lee Rhiannon, Sarah Hanson-Young and Larissa Waters – all of the Green’s Party of which I am now a member, to the Refugee Council of Australia to be distributed to members of this exceptional organisation, to the Australian Refugee Foundation and its very distinguished Patrons, some of whom I have met, to former Democratic party leader, former Senator Andrew Bartlett, now in the Greens party, and to Hon Kevin Rudd MP, my Federal member of parliament.
I am also sending a copy to:

A citizen of Australia, who has been recognised nationally and internationally for his work in human rights over six decades, was trying to address a serious problem facing this, and neighbouring countries. He is harassed and deported by another country on some very dubious grounds. Do you not think you should act?