Sharing with TamilNet more details of his deportation from Singapore on 14 December, 81-year-old Australian human rights activist of Sinhala origin, Dr Brian Seneviratne said that the Australian Foreign Minister Bob Carr was in Colombo, meeting Mahinda Rajapaksa, at the time of his deportation. Reminding the Australian Prime Minister that what had happened in Sri Lanka was genocide, and the regime is a set of pathological liars, Brian said: “Mr Carr has enhanced the ability of this murderous regime to commit gross violations of human rights by doing what he has just done in Colombo – saying that Australia will help the Sri Lankan Navy to stop people fleeing from the murderous regime in Sri Lanka.” 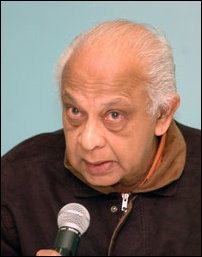 The letter Brian sent to the Australian Prime Minister after his deportation from Singapore was a version edited by him considering the size. He has now sent to TamilNet the omitted parts of the original draft as well for publication.

“Prime Minister Gillard, your Foreign Minister, Bob Carr, was dining and wining with His Excellency President Mahinda Rajapaksa in Colombo, at the time when one of his Australian citizens was being deported for no valid reason, almost certainly at the request of the Sri Lankan government,” Brian wrote in his original draft.

Brian said that he had worked out the game of India, China, USA, UK and Rajapaksa, but “what is your game and the game of the Labor Party that I have supported for the past 36 years that I have been in Australia,” Brian asked Prime Minister Julia Gillard in the original draft.

“When geopolitics and trade are pitted against human rights, the latter always loses,” Brian said.

PDF: Full text of the omitted parts of Brian’s letter to Australian PM

“Am I angry? No, just amused. I realised, yet again, that the totalitarian regime that runs Sri Lanka, and the Singapore regime are brothers in arms. From what happened to me in 2009 in Malaysia, that country can be included. To be added might be the unseen faces in Australia,” Brian wrote.

“Everyone knows what happened, and is happening, to the Tamil civilians in the North and East of Sri Lanka.” But the attitude is that “It never happened. Nothing ever happened. Even when it is happening, it wasn’t happening. It didn’t matter. It was of no interest,” Brian cited.

“Neither you nor your Foreign Minister really know, do you? You don’t because neither has been to the North and East of Sri Lanka and spoken to ordinary people to make an assessment of the terrifying life they lead under a brutal, murderous Armed Forces and Police, who are Sinhalese, 99.9% and 95% respectively, who treat Tamil civilians as the ‘spoils of war’ – to be used and abused with impunity,” Brian observed in his original draft of the letter.

“The incidence of rape of Tamil women and girls has escalated. That is one reason why AI, HRW and ICG are banned from visiting Sri Lanka, the Tamil North and East in particular. It was to prevent me from presenting this and other highly damaging information in Malaysia, that I was deported. Of that, there can be no doubt,” Brian said.

“I am just about to publish a paper on this, “An epidemic of Rape of Tamil women and girls in Sri Lanka by the Sri Lankan Armed Forces”. This is not irrelevant when dealing with the problem of asylum seekers, since it is to escape being raped that so many Tamil parents are sending their daughters away as refugees, or getting them married at an early age,” he wrote.

Cautioning on the dangers people like the Bishop of Mannaar might face under a regime like Colombo, Brian said, “The Pope will have to act. After all, it is one of his flock, who is under (real) threat. Will he? I doubt it. I have a photograph of the Pope clasping the blood-stained hands of Mahinda Rajapaksa – clasping it not with one hand but with both!”

“I have been told who in Singapore was responsible for my deportation. No prizes for guessing. He has done a ‘good job’ for once in his life. He will surely be rewarded which has been his game for years,” Brian wrote on his deportation. Along with deportation, his baggage was also pilfered of toys he was carrying for children in Indonesia, Brian records.

“Sri Lanka has a choice: Peace with Justice or An unjust Peace with permanent hostility of the Tamil people in the North and East. If the latter is chosen, protest we must and we will. Silencing us will not work, nor will deportation,” Brian concluded adding that Australia could not remain a signatory to UN conventions and at the same time violate them.