Beginning a ministerial visit to Colombo since the Vanni War, the Canadian government once again prepares itself for climbing on the geostrategic bandwagon that detracts or deviates from delivering righteous solutions to genocide-afflicted Eezham Tamils, political observers in the island commented. They cited the double image cut by the visiting Canadian Minister portrayed in two separate news releases of the Canadian government: one denying the right to flee to the people subjected to genocide and the other showing concern to ‘human rights’ situation in the island, but both upholding integrity of the genocidal State. A different set of citations of the minister appeared in the SL government news release. The minister also cut a double image when media quoted him referring to “Sri Lankan immigrants” and “Tamil Canadians.”

Attending a Joint Woking Group on People Smuggling and Transnational Crime, chaired by SL Defence Secretary Gotabhaya Rajapaksa, the Australian FM announced a four-point programme of collaboration with Sri Lanka in this regard: 1.Intelligence sharing including provision of equipment and training to enhance Sri Lankan intelligence expertise; 2.Strengthening Sri Lankan Navy by training including in maritime air surveillance and direct supply of equipment; 3.Campaign in concern coastal areas, and 4.Economic ‘development’ to prevent refugees leaving [as though that is the reason for people fleeing an internationally abetted genocidal war and structural genocide].

The visiting Canadian Minister was primarily taking up the same issue in Colombo.

“Canada boosted its international efforts to prevent human smuggling after the arrival of two smuggling ships in 2009 and 2010 [carrying Eezham Tamils]. Since then, no planned smuggling voyages have succeeded in getting to Canada,” The Canadian government news (CNC) said on Monday in its official news release on the minister’s deliberations in Colombo.

The CNC, reminding the action the government took on fleeing Tamils and citing the minister in Colombo came out with a strongest possible warning against anyone trying to flee from the island into Canada in any organized way.

The Canadian minister visiting Colombo encouraged the use of Canada’s ‘generous and open legal immigration system,’ but the minister may have to answer the double standard – why the unreasonably continued ‘terrorism’ tag goes against the ‘generosity’ he is referring to, while he is prepared to shake the criminal hands of genocidal Colombo in seeking cooperation.

Media reports said that the Canadian Minister was referring to the LTTE as a challenge to Tamil Canadians: “One of the challenges the community had, particularly the Tamil Canadians, during the period of the conflict here, was that many of them felt that they were living under pressure from the LTTE. The Tigers were running extortion operations,” he was saying.

The SL government news that also appeared in its External Affairs Ministry news cited the minister in the following words: “Minister Kenney pointed out that the Canadian Government’s proscription of the LTTE in 2006 had a direct impact in his view in curbing the flow of funds for terrorism in Sri Lanka. He said the Canadian Government has continued to take stringent action against LTTE activists operating on their soil and assured of their continued cooperation in this regard.”

In his own words, Mr Kenney was saying: “Canada regards itself as a friend of Sri Lanka. The government of Prime Minister Harper, we believe, helped to hasten the end of the war by banning the Tamil Tigers as a illegal terrorist entity and the World Tamil Movement by cracking down on their fund raising and political operations in Canada. We are opposed to all forms of terrorism and extremism, but we are also champions of human rights and dignity.”

The hundreds of thousands of Eezham Tamils in Canada, who took to streets during the war, may have to ask for an explanation from the minister for the statements he has made in Colombo, activists in the island said.

Jumping on the US-led bandwagon and aligning with the EU’s wrongly-placed ban, Canada proscribed the LTTE in 2006, affecting the diplomatic balance of power in the talks between the Government of Sri Lanka and the LTTE that finally led to the genocidal end of the war and to the on-going genocidal solution.

The Canadian Minister claimed in Colombo that Canada has the largest “Sri Lankan diaspora” community, insulting the identity of the people even after they got into a “generous” country.

But he was conscious of the image he had to portray to the diaspora. So there was a second news release that concentrated on his observations on ‘human rights’ situation in the island:

The minister was concerned about the lack of progress towards ‘reconciliation’, recent impeachment of the Chief Justice, harassment of members of the media and non-governmental organizations as well as the recent and on-going detention of students in Jaffna.

On Canada’s participation in the CHOGM, he said, “[..] As host of the event, Sri Lanka is under close scrutiny for its adherence to Commonwealth values and principles.”

Canada’s “level” of representation [not total boycott] at this meet depends of progress in ‘reconciliation’ and accountability including an independent investigation [not necessarily international], the minister said.

Sri Lanka showing tangible progress on a process of “national political reconciliation,” was the minister’s concern. 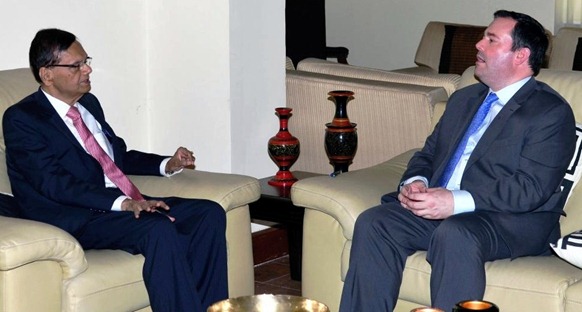 According to SL government news, the SL External Affairs Minister G L Peiris briefed the Canadian Minister regarding the arrangements for the Commonwealth Summit in Sri Lanka in November this year.

As usual GL Peiris was harping on time and space.

As the structural genocide of Eezham Tamils and ultimate annihilation of their nation in the island became streamlined and accelerated only after the LLRC-based ‘reconciliation’ (tabled by the US and its allies) adopted by the UNHRC, what everyone means ‘progress’ in it needs careful perusal, commented Tamil political activists in the island.

Writing on the Australian stand on refugees from the island, the World Socialist Web Site said on 14 December that the stand was motivated by elections in Australia and was abetted by media. It cited an editorial in Murdock’s newspaper ‘Australian’ that praised the FM’s visit to Sri Lanka.

“Australia’s collaboration in these operations is a blatant breach of the international Refugee Convention, which recognises a right to flee persecution,” the website said, adding that the media editorial “underlines the readiness of the political establishment to tear up the most fundamental legal and democratic rights of working people in order to pursue its program.”

But, what Australia and Canada are doing particularly on the question of Eezham Tamils is more than a refugee issue or an electioneering exercise, Tamil political observers in the island said.

It is once again a West-led mobilisation to compromise on Sri Lanka for geostrategic interests, saving and bargaining with the State and regime, ignoring whatever genocidal they are, the observers said.

The provisions of the Australian cooperation would show that it is not merely refugee-related but militaristic, they said.

Writing in December, a Harvard researcher and a US Naval War College professor were aiming at an opinion mobilization in India, by citing China, in order to either make India to once again climb on the bandwagon that led to the genocidal paradigm in the island or to ‘save’ it from the worse course it had adopted in the post-war times.

The US writers were concerned that this would prevent India from competing with China in wooing Sri Lanka.

“Hence the domestic political complications imposed on New Delhi by the Tamil Nadu political faction is heightening the likelihood that Chinese warships will be visiting or based in southern Sri Lanka in the near future,” the US writers said.

It is not difficult to understand that the interest is actually the US interest, Tamil political observers said.

If the opinion takes the line that Tamils in Tamil Nadu ‘complicate’ India’s policies, so will be the Tamils in the diaspora to the West, in the eyes of such opinion makers.

The signals that come from Australia and Canada, and the confidence with which Gotabhaya Rajapaksa carries out militarization of the country of Eezham Tamils have to be carefully understood by Tamils in the island, in the diaspora and in Tamil Nadu, the political observers in the island cautioned.

A politician on the Tamil side, whom the visiting Canadian Minister met in Colombo, was TNA’s nominated parliamentarian, Mr. M.A. Sumanthiran.

Meanwhile, news sources in Tamil Nadu said that Mr. C. Mahendran of the Communist Party of India, known for his views supporting the self-determination of Eezham Tamils, was denied of Canadian visa a few days ago when he applied to attend a conference convened by Tamil Canadians.