JVP parliamentary group leader Anura Kumara Dissanayake says the governing party members in Parliament and the President have violated the Constitution. “It is the government that has violated the Constitution that is governing the country,” he said. He explained that there is no clash between the Executive and the Legislature or the Legislature and the Judiciary, but there is a clash between the arbitrary actions of the Executive and the fair actions of the Judiciary. Dissanayake pointed out that what is needed is an alternative to the government and that the JVP stands for this alternative.

Following are excerpts of the interview:

Q: Why did the JVP decide to boycott the debate on the impeachment motion against the Chief Justice? 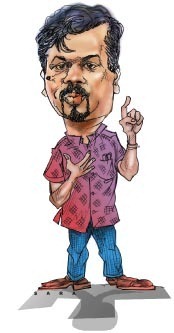 A: The impeachment motion is a result of the government’s plan to oust the Chief Justice. The first step was the presentation of the impeachment motion. The next step was to appoint a parliamentary select committee (PSC), which consisted of a majority of governing party members, to probe the charges. The PSC then arbitrarily presented a report. Our representatives walked out of the committee rejecting the PSC and its report. It is the Supreme Court that has the right to interpret the law according to the Constitution. The Supreme Court has given its interpretation on this matter and the Court of Appeal has given two verdicts. The rulings were that the impeachment process was not consistent with the Constitution and that the PSC report is illegal. If we accept the Supreme Court decision then there is no report to be debated. In such a scenario, participating in the debate would mean indirect support to the government’s agenda. Therefore, our party is not ready to stand by the government in Parliament on this matter. Hence, we decided not to participate in the debate.

Q: Do you feel that the opposition political parties have effectively campaigned against the impeachment motion?

A: We cannot speak about other parties. As the JVP, we held a protest march from Aluthkade to Fort the day after the impeachment motion was handed over we launched a poster campaign, distributed leaflets to create awareness among the people and launched a campaign to sign a petition. A series of seminars were also held in Colombo and Anuradhapura. We also held a massive protest march from Campbell Park to Hyde Park. We have therefore held street campaigns against the impeachment motion. We gave our fullest support to the process that took place within the Judiciary and the Supreme Court. We have clearly indicated our stance and acted accordingly, in Parliament and the party leaders meeting as well as in the PSC. As a party, we have carried out a considerable campaign to stand against the government’s undemocratic actions. However, when speaking of the actions of other opposition parties, it is a sad situation.

Q: The government has proceeded with the impeachment motion ignoring the Court of Appeal ruling. What does the JVP plan to do?

Q: How do you think the clash between the Executive, Legislature and Judiciary will end?

Q: Will the JVP oppose the appointment of a new Chief Justice?

A: We have a different reading of the Legislature and Judiciary. These two institutions are rotten inside but appear to be pure on the outside. None of these institutions have brought justice and fair play to the people of this country. The heads of the institutions are not important. What is important is that the government has laid down a plan to go after the Chief Justice. The main reasons for these are the court verdicts on the A/Level Z-score issue and the Divi Neguma Bill. Rajapaksa is therefore in need of a Judiciary that will listen to his dictates and can be controlled in order to stabilize the dictatorial rule. A new Chief Justice would be appointed and our stance is that verdicts of such a Chief Justice should not be accepted.

Q: How do you see the future of the country’s Judiciary?

A: The Judiciary has not always been just. Look at the Welikada Prison and the people who visit the inmates. It is ordinary people travelling in buses and three wheelers who visit the prison to see their loved ones. You do not see anyone visiting the inmates in a Benz car or a Pajero. That means justice has not been properly served. Is it only the people from the lower levels of society who are engaged in criminal activities? But they are the only ones who are sent to jail. It is the high-class people who are engaged in the drug business, maintain brothels and waste millions of rupees of the country. They are also the ones behind large-scale fraud and operate the underworld. But the Police or the Judiciary has not punished them. Therefore, these institutions function for the needs of a certain class in society. You cannot expect much change from such Courts except to follow the dictates of the likes of the Rajapaksas.

Q: Do you think the opposition is strong enough to rally the people and bring about a change in the current system?

A: What is needed is not an opposition, but an alternative people’s movement. What can the UNP do? They can appoint a group of ministers in place of the existing group. They will appoint another Chief Justice in place of the current one. They will put a different group who will engage in fraud and corruption in place of those currently engaged in it. They will put different burdens on the people. They will maintain a different group of thugs. The UNP therefore is a substitute for the current government and not an alternative. What is needed is an alternative to the government. The JVP stands for the alternative. We believe that a massive people’s movement needs to be set up with the working masses, intellectuals, professionals, youth and progressive people. It is a big challenge in forming such a movement, but that needs to be overcome. The JVP will do its maximum to bring about this movement.

Q: What does the JVP plan to do from Monday?

A: There is now anarchy in the country. All democratic forces in the country have to come together. The media was first targeted and media personnel were killed, attacked and media institutions were also attacked and burnt. The Rajapaksas have now created a media that is supportive of it by threatening, intimidating, buying over and by giving perks to them. The Judiciary is now under attack. The government earlier attacked protesting masses in Katunayake Chilaw. The government is ready to engage in any undemocratic act to safeguard its dictatorial rule.