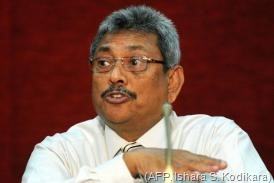 The US has refused training for a Sri Lankan general in a move that undermined military cooperation and prompted Colombo to turn to China and other nations for help, a top defence official said Thursday.

Defence Secretary Gotabhaya Rajapakse said US authorities had refused to enrol Major-General Sudantha Ranasinghe and Colombo was concerned that the decision was based on "wrong information".

He did not give details of the course the officer had been nominated to follow, but said he would take up the issue with a senior US delegation visiting the country at the weekend.

"I want to tell them that they are wrong… every time they (US diplomats and officials) meet me, they say they want to strengthen the cooperation with our military," Rajapakse said.

"If the US stops military training (completely), then Sri Lankan officers will only go to China, India and Pakistan."

Rajapakse did not specify why Ranasinghe had been rejected. The US refuses entry to any foreign military personnel suspected of human rights violations.

The US and other nations have been highly critical of Sri Lanka’s military for its final onslaught on Tamil rebel areas in 2009, which left an estimated 40,000 civilians dead.

Ranasinghe had been the commissioner-general of rehabilitation responsible for reintegrating into society some 12,000 Tamil rebels who surrendered in the final stages of the war, Rajapakse said.

He said the officer had not been involved in direct combat operations.

The US stopped selling military hardware to Sri Lanka throughout much of its 37-year ethnic war against the Tamil rebels, pushing Colombo to make purchases from China, Pakistan and several East European nations.

Military officials said 200 junior Sri Lankan officers continued to receive opportunities for short-term training in the US, but the issue was with senior officers who had held command positions during the height of the fighting.