Marking India’s 64th Republic Day (26-01-2013) celebrations, a performance of Malayala Martial Arts, called Ka’larip-payattu, has been organized at Veerasingam Hall in Jaffna on Thursday, by New Delhi’s Consulate General in Jaffna. The Commander of the Sinhala military occupying Jaffna, Maj. Gen. Mahinda Hathurusinghe, will be the Chief Guest at the celebrations, presided over by New Delhi’s Consul General in Jaffna, Mr. V. Mahalingam. Genocidal Sri Lanka’s Ministry of Culture and Arts and New Delhi’s Indian Council of Cultural Relations jointly sponsor the programme. Meanwhile, India is in the top in training genocidal Sri Lanka’s Sinhala military at the rate of 1400 personnel per year, admitted, New Delhi’s envoy in Colombo Ashok K. Kantha. 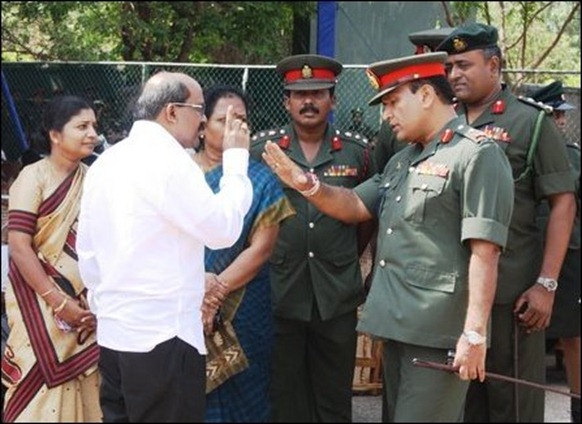 Maj. Gen. Hathurusinghe, commander of the occupying Sinhala military in Jaffna will be the chief guest and V. Mahalingam, Consul General of India in Jaffna will preside over a performance of Malayala Martial Arts in Jaffna on Thursday.

New Delhi’s military training to Sri Lanka is bigger than what anyone else provide and globally, India is Sri Lanka’s largest trading partner, Colombo media reports cited the Indian envoy saying on the occasion of the Republic Day celebrations in Colombo on Saturday.

SL Senior Minister Ratnasri Wikremanayake thanked New Delhi for its ‘unconditional support’ at a crucial stage of his country’s history in helping to defeat the LTTE.

In the meantime, to enhance New Delhi’s ‘reaching out’ agenda towards genocidal Sri Lanka, some new proposals have been made by Indo-Lanka Joint Study Group run by many old hands at the game.

Finding that “Aggressive stand taken by India from time to time with regard to the ethnic problem in Sri Lanka,” has made “lack of trust” to permeate into various levels of society in the island, the study group’s post-achievement proposals are now reduced to ‘devolution through the provinces’ without causing any ‘constrains,’ and implementation of Colombo’s LLRC recommendations. In fact, political solution is now marginalised in their new studies.

New Delhi’s Malayala Martial Arts showcase in Jaffna on Thursday is “for the benefit of Art lovers of the Northern Province,” said the press release of New Delhi’s Consulate General in Jaffna on Tuesday.

The Malayala Martial Arts communities are not new to the peoples in the island, as Pa’nikkars and Kuruppus were people integrated into the Eezham Tamils and Sinhalese.

But what is new is the Sanskritized culture of New Delhi’s imperialism coming out with terms such as Dhanur-veda and Marma-chikilsa in introducing the ancient art of the Dravidians, known as Ka’larip-payattu (literally meaning the Arena or Battlefield Training in Dravidian: Ka’lam > Ka’lari: the arena, battlefield, DED 1376; Payil > Payittu, Payattu: learn, train, DED 3942) commented Aesthetic Studies circles in Jaffna.

They also commented upon the Consulate General, in its Hindi signboards and letterheads, choosing to write Yaazhppaa’nam as ‘Jaaphnaa’ in Devanagari (Bhaarata Kaa Pradhaana Konsalaavaasa, Jaaphnaa), adopting the anglicised form instead of the original Tamil form.

During the genocidal war, Malayala Witchcraft was a favourite of the politically topmost in Colombo. The Indian Council of Cultural Relations will have many followers among the Sinhala politicians if it could start an academy in the island to teach and practise such arts and crafts, the Aesthetic Studies circles commented further. 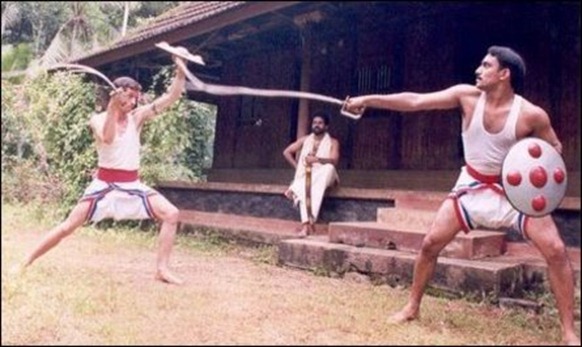 The teacher and the trainees of Ka’larippayittu martial art, Kerala. [Courtesy: Kalarippayattu, Wikipedia]