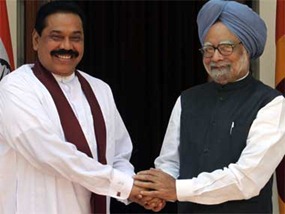 If India has been constrained to side with Sri Lanka on the ethnic Tamil issue as well as in blocking international pressure for its alleged war crimes because of geopolitical weakness, it can seize an upcoming opportunity: the 22nd UN Human Rights Council (UNHRC) session to be held in March.

Dissatisfied with Sri Lanka’s inability to comply with international demands – even after a resolution at the UNHRC last year – the US is planning a “procedural resolution” against the country. In spirit and intent, it will be a near-repeat of the last resolution, which wanted Sri Lanka to implement its own recommendations on the 2009 war excesses and punish the guilty.

Reuters quoted visiting Deputy Assistant Secretary of State James Moore in Colombo as saying, “The US and the other 23 members of the UNHRC who voted for that resolution in 2012 believe that the government of Sri Lanka needs to fulfill its commitments made to its own people.”

Following the war against the LTTE, in which about 40,000 Tamil civilians were allegedly killed and scores of others executed, Sri Lanka had set up an expert group called the LLRC (Lessons Learned and Reconciliation Commission) to investigate alleged excesses and recommend action. However weak its recommendations were, Sri Lanka dragged its feet in implementing them.

Tangled in bureaucratic procedures that Sri Lanka goes at length to explain as the process of their implementation, the LLRC recommendations have been gathering dust for over two years now.

India’s role at the UNHRC in March last, where the US and its allies pushed for the anti-Sri Lanka resolution, was dubious at best. It voted supporting the resolution at the 11th hour, but spoiled its efficacy by watering it down. Before and after the resolution, the country appeared to be vulnerable to the deception of the island nation, which even did some hostile posturing through its proxies.

It’s the geopolitical quadrangle involving China and Pakistan that is making India’s knees weak when it comes to its island neighbour. The wily Sri Lankan regime constantly dangles this geopolitical quadrangle, forcing India to behave like an insecure lover. In the process, China has reportedly made considerable economic and strategic gains in the country, which has even prompted the opposition UNP to advise caution.

“Sri Lanka has gone out on a limb to offer projects to China since the inception of this year,” newspaper Nation quoted UNP member of parliament and economist Dr Harsha de Silva. “Sri Lanka has sidelined India for unknown reasons and this shortsightedness could prove to be harmful in the long term considering that the UNHRC summit is months away.”

Besides the Hambantota port and international airport, China has reportedly bagged another highway project and investments in other sectors such as agriculture.

Notwithstanding intense international pressure and the last UNHRC resolution, Sri Lanka has grown even more brazen in handling dissent, and its regime has become more undemocratic and intolerant to criticism. The latest in its rising defiance was the impeachment of the Supreme Court chief justice Shirani Bandaranayake, even as civil rights groups at home and the international community stridently asked the government to stop this undemocratic process.

In a gross violation of the separation of powers, which is an inalienable characteristic of a democracy, the Mahinda Rajapakse regime removed the chief justice because she exercised her judicial right to question the government. Justice Shirani had asked the government not to take back the powers of the provinces without the Court’s approval.

In a funny procedure, that befitted the conduct of a banana republic, Rajapakse then used his massive parliamentary strength to send her home, and appointed a pliable ally as the next chief justice. With this, the vital separation of powers between the judiciary and the executive has in effect vanished in Sri Lanka, letting the President virtually handle both. He is now the country’s first democratically elected autocrat.

The impeachment has sent a clear signal to the judiciary to fall in line or get out. In comparison, even a crumbling Pakistan has a better judiciary.

As Firstpost had noted, Justice Shirani’s impeachment was India’s foreign policy failure, because with her removal Sri Lanka has ensured that its aim not to devolve powers to the Tamil provinces is now unopposed. This was against the promise given to India, with regards to the 13th amendment of the Sri Lankan constitution. (The 13th amendment sets up the Provincial councils and outlines some devolution of power)

India has always pacified Tamil groups in the country citing 13th amendment, promise of more inclusive politics and the reported rehabilitation efforts. The impeachment exposed Sri Lanka’s double standards on the issue and betrayed its treacherous designs with India.

The Sri Lankan President’s address on the 65th independence day, where he ruled out autonomy for Tamils and promised only equal rights, confirmed that India has been cheated out of the game. This was against what has been historically agreed with India.

Now, as many independent observers and rights groups have warned time and again, the country has completely gone back on its promise. It may be easily concluded that the question of Tamil autonomy is now more or less a closed chapter; it’s not even a pipe-dream.

Available information shows that the ethnically and culturally distinctive (Tamil) north and eastern areas of the country are more homogenised and militarised now. The regime would want to culturally unify the distinctively Tamil areas, which will prove to be detrimental to the interests of the Tamils as the Sinhala language policy had done a few decades ago.

India has other reasons to get out of its geopolitical weak spot.

There is considerable political protest brewing in Tamil Nadu. President Rajapakse is scheduled to visit India, ostensibly on pilgrimage to Bodh Gaya in Bihar, and Tirupati in Andhra Pradesh, and the Tamil groups are planning black-flag protests.

At a DMK-led Tamil Eelam Supporters Organisation (TESO) meeting on Sunday in Chennai, Karunanidhi asked the union government not to encourage Rajapakse in India. He said Rajapakse was a an enemy of humanity. He also wanted the centre to facilitate a resolution at the upcoming UNHRC session asking for a referendum in Sri Lanka.

The US resolution will be yet another opportunity for India to call Sri Lanka’s bluff and take action on its blatant dismissal of the demands of human rights groups and international community. Over the years, it has perfected the art of lying, dodging and ganging up with countries that have scant respect for human rights and democracy to thumb its nose at civility. India has been a willing victim.