Similar to the so-called High Security Zone (HSZ) on the northern coast of Jaffna Peninsula, including KKS harbour and Palaali airport that has now become a permanent enclave for Sinhala military cantonment, colonisation and corporatism, another enclave in the Poonakari division is in the making, news sources in Vanni said. Around 31,000 Sinhala military personnel are stationed in the Poonakari division where currently only 6216 families live, which means that for every Tamil family there are 5 personnel from the genocidal military. While the SL military alone occupies 800 acres of land, the Sri Lanka President Mahinda Rajapaksa’s siblings Basil and Gotabhaya, and progeny Namal have appropriated many more acres of land. Building a Chinese assisted international airport at Poonakari is in the centre of the plans. 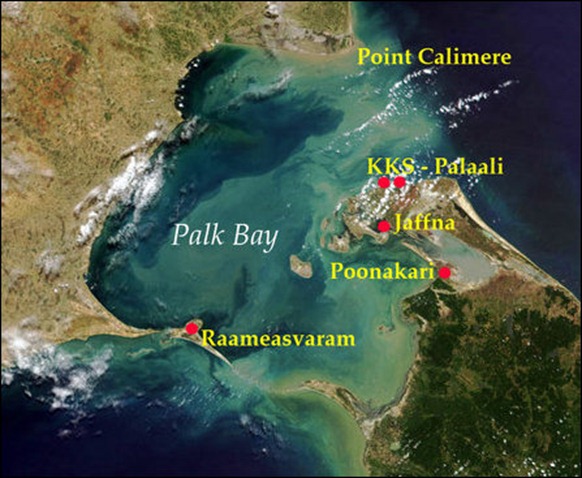 The Eezham Tamil legacy of Poo-nakari (meaning the town of flowers) and the region around it is of much antiquity going back to the times of proto-history and Tamil Brahmi inscriptions.

The strategic location of Poonakari at the entrance to the Jaffna Peninsula, Jaffna Lagoon, and its location facing the Palk Bay and the opposite coast have made all the European colonial powers –the Portuguese, Dutch and the English to maintain a station there.

But unlike the Sinhala colonial military of today, the European colonial powers didn’t commit a demographic genocide, as they didn’t have the human resource for it. 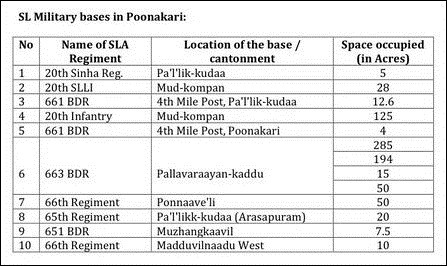 Needless to say that the SL military idea is to permanently seal off and choke Jaffna Peninsula as well as Jaffna city, besides checking the Tamil Nadu coast and the Palk Bay.

Colombo and abetting powers have larger plans behind the militarisation.

Under several names the Rajapaksa family is now appropriating large tracts of lands, especially coconut plantations in the region, with plans for new Sinhala colonial urbanisation in the region, sources in Vanni said.

A plan to build an international airport at Poonakari with Chinese assistance has already been announced.

Even the 6000 odd Tamil families who have been allowed to resettle in the Poonakari division are put to all kinds of abuses by the occupying Sinhala military, so that the families would either become Sinhalicized slaves or would leave.

The idea of Rajapaksa regime and the abetting powers is to create new militarised and Sinhalicised cities, corporate enclaves and townships in the whole of the conquered country of Eezham Tamils.

The causeway over the Jaffna Lagoon built by the British government close to Poonakari on the A32 highway doesn’t help the ‘development’ of Tamils but helps only the development of the military, colonisers and corporatism of the genocidal regime, local people of Poonakari said.

The British government never said anything against the misuse of its assistance or against the on-going genocide or colonisation.

On the contrary, the British minister of state from the Foreign and Commonwealth Office who visited Vanni a few days ago went to see another project of the SL military at Mullaith-theevu.

Keappaa-pulavu in Mullaiththeevu is on the eastern coast where the genocidal military is planning another enclave similar to Jaffna HSZ and Poonakari.

“The entire genocide and structural genocide committed on us, the colonisation, militarisation and annihilation of our country are actually designed and carried out by certain powers and that is why they don’t recognize the genocide committed on us, our nationhood and the on-going colonisation that is annihilating our country. The genocidal Sinhala military is the new Lascarin military of theirs. The Sinhala people will eventually understand who were the real freedom fighters and who were the Lascarins,” commented a Tamil schoolteacher in Vanni.

“No wonder the Rajapaksa regime confidently proclaims to the world that the presence of the military is being reduced, while in fact it is stabilised, and there is always the International Community of Establishments to acknowledge the ‘progress’ the regime is making. But then, we also have their cronies among us who don’t want to tell the world that the occupying military should quit,” commented a journalist in Jaffna.