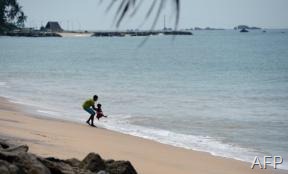 Sri Lanka on Thursday banned the sale of land to foreigners, charging that prime properties bought by outsiders had been neglected and that the country was not reaping the full benefits of their tourism potential.

Information Minister Keheliya Rambukwella said the cabinet had approved the move in the wake of intense local demand for land for tourism development and industry in a country emerging from nearly four decades of ethnic war.

"Foreigners have bought prime lands, particularly beach properties, and in most cases they have neglected them," Rambukwella told reporters.

"The country is not getting the full economic benefit from these properties owned by foreigners," he said.

The government initially announced plans to ban the sale of property on the island nation to foreigners last November.

There will be no moves to expropriate foreign-owned properties, but proprietors will not be allowed to sell to other foreigners under the new laws. The land can be sold only to Sri Lankans, the minister said.

Favoured locations along the island’s southern coast, as well as heritage sites where Portuguese, Dutch and British colonial rulers had their forts, had been bought by foreigners in recent years, Rambukwella said.

But there had been little development and chances had been lost to create jobs, he added.

In 2004, the government slapped a 100 percent tax on the purchase price of properties sold to foreigners to discourage the sale of land to non-natives.

Authorities will continue to lease state land to foreign investors but would no longer sell it, Rambukwella said.