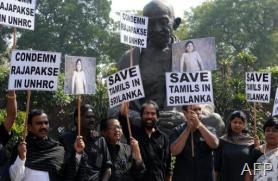 India pledged Wednesday to push for a "strong" resolution against Sri Lanka in the ongoing United Nations Human Rights Council that would demand its neighbour investigate alleged war crimes.

The issue split the ruling coalition and heightened the risk of early elections on Tuesday when a regional ally quit the government after demanding that India condemn "genocide" against minority Tamils in Sri Lanka’s civil war.

India has suggested amendments to a draft resolution being drawn up by the United States, Finance Minister P. Chidambaram said ahead of an expected vote on the text at the Geneva-based UNHRC on Thursday.

"India’s position has always been and remains that the UNHRC should adopt a strong resolution that would send a resolute message to Sri Lanka and goad Sri Lanka to accept an independent and credible investigation," Chidambaram said.

Sri Lanka has denied that its forces committed war crimes during the decades-long conflict with Tamil separatists in the north and east of the country, which was brought to an end by an military onslaught in early 2009.

International rights groups estimated that 40,000 civilians died in the final months of fighting.

India, home to millions of Tamils who share links with their counterparts in Sri Lanka, risks a further deterioration in ties with Sri Lankan President Mahinda Rajapakse who has resisted any foreign interference.

Chidambaram also said the government was also consulting with other parties about a parliamentary resolution which would also call for Sri Lanka to investigate the alleged war crimes.

Leader of the ruling Congress party, Sonia Gandhi, said Tuesday that India was "most pained" that Tamils in Sri Lanka were being denied their rights and that New Delhi was "anguished by reports of unspeakable atrocities".

Sri Lanka’s top general, who led the campaign against the Tamil Tiger rebels, said Tuesday that the government should accept an investigation but he rejected any suggestion of genocide.

The Dravida Munnetra Kazhagam (DMK), a regional Indian party from the state of Tamil Nadu, said on Tuesday it would quit the government for failing to condemn Sri Lanka in sufficiently strong language.