The illegal confinement and brutal treatment of Tamil prisoners of war by the Sri Lankan state and the injustice by the International Community of Establishments (ICE) in facilitating this was elucidated by youth activist Krisna Saravanamuttu at the event ‘Criminalization of Dissent’ on the occasion of Palestine Political Prisoners’ Day held at the University of Toronto on Wednesday. Mr Saravanamuttu also gave examples of how former PoWs with legitimate claims to asylum were rejected by Western governments, noting that this put them at further risk from genocidal Sri Lanka. Activists from other communities also shared their opinions and experiences on other cases of incarceration for political reasons. Speaking to TamilNet, Issam Alyamani, veteran Palestinian activist, urged Eelam Tamils in the diaspora to make the release of Tamil prisoners of war and political prisoners as a priority. 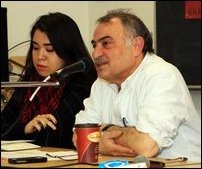 “The Government of Sri Lanka was more brutal than the Israeli government in its attack against the Tamil population in 2009,” Mr Alyamani, Executive Director of Palestine House, a Palestinian cultural organization based in Canada said.

“As an appeal to the Eelam Tamils, specifically in the Diaspora, I urge you to make the freedom of Tamil prisoners of war and political prisoners one of your main priorities because their release will help unify your people and propel your liberation struggle forward,” he added. 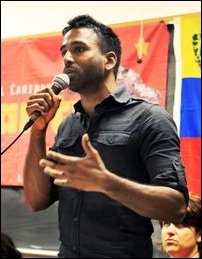 Speaking on behalf of the Coalition for Tamil Rights, Mr Saravanamuttu discussed the routine rape and sexual abuse of former LTTE cadres as a tactic of state terror to continue the dehumanization of Tamils.

Referring to the Geneva resolution in March, he argued that the ICE’s insistence on an LLRC based solution gave confined the very idea of justice within the parameters of a genocidal Sri Lankan state, which only legitimized the torture and rape of Tamil PoWs in and outside of detention.

He told the audience that some western governments are favorable only to asylum seekers who are willing to provide testimony against the LTTE on alleged human rights violations, yet reject those asylum seekers who do not meet their agenda of selective evidence, giving an example of an ex-LTTE cadre and rape survivor whose asylum plea was rejected by the Swiss government.

“The global proscription regime against the LTTE perpetuates the physical and psychological torture experienced by ex-LTTE cadres seeking asylum. In fact, rejected asylum seekers who were former LTTE members face increased risk of arrest, torture, sexual assault and even death at the hands of the Sri Lankan state,” he said.

Placing the responsibility for the predicament of the Tamil PoWs on the co-chairs and their mismanagement of the peace process leading to the genocide in 2009, Mr Saravanamuttu added “We are not calling for the release of Tamil prisoners of war on abstract humanitarian grounds. We are doing so strictly on political grounds. The former LTTE members were freedom fighters that most Tamils supported and are a key stakeholder in building a just political solution”. 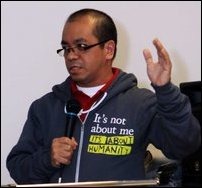 Political activists from other communities also shared their experiences on the topic.

Identifying the usage of arbitrary arrests by Canada, Mohammed Zeki Mahjoub, an Egyptian born Canadian, spoke about his arrest on a Canadian Security Certificate. In June 2000 Mr. Mahjoub was arrested in Toronto, Canada, without being charged or accused of having committed a crime. Canadian officicals had deemed Mr. Mahjoub a potential danger based on inaccurate information provided by the Egyptian Hosni Mubarak regime. 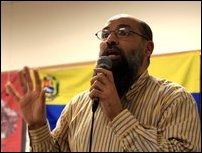