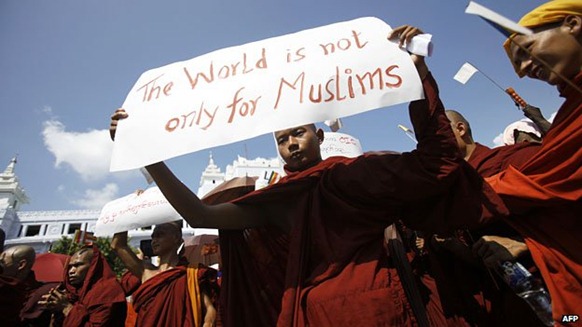 Of all the moral precepts instilled in Buddhist monks the promise not to kill comes first, and the principle of non-violence is arguably more central to Buddhism than any other major religion. So why have monks been using hate speech against Muslims and joining mobs that have left dozens dead?

This is happening in two countries separated by well over 1,000 miles of Indian Ocean – Burma and Sri Lanka. It is puzzling because neither country is facing an Islamist militant threat. Muslims in both places are a generally peaceable and small minority.

In Sri Lanka, the issue of halal slaughter has been a flashpoint. Led by monks, members of the Bodu Bala Sena – the Buddhist Brigade – hold rallies, call for direct action and the boycotting of Muslim businesses, and rail against the size of Muslim families.

While no Muslims have been killed in Sri Lanka, the Burmese situation is far more serious. Here the antagonism is spearheaded by the 969 group, led by a monk, Ashin Wirathu, who was jailed in 2003 for inciting religious hatred. Released in 2012, he has referred to himself bizarrely as "the Burmese Bin Laden".

March saw an outbreak of mob violence directed against Muslims in the town of Meiktila, in central Burma, which left at least 40 dead.

Tellingly, the violence began in a gold shop. The movements in both countries exploit a sense of economic grievance – a religious minority is used as the scapegoat for the frustrated aspirations of the majority.

On Tuesday, Buddhist mobs attacked mosques and burned more than 70 homes in Oakkan, north of Rangoon, after a Muslim girl on a bicycle collided with a monk. One person died and nine were injured.

But aren’t Buddhist monks meant to be the good guys of religion?

Aggressive thoughts are inimical to all Buddhist teachings. Buddhism even comes equipped with a practical way to eliminate them. Through meditation the distinction between your feelings and those of others should begin to dissolve, while your compassion for all living things grows.

Of course, there is a strong strain of pacifism in Christian teachings too: "Love your enemies and pray for those who persecute you," were the words of Jesus in the Sermon on the Mount.

But however any religion starts out, sooner or later it enters into a Faustian pact with state power. Buddhist monks looked to kings, the ultimate wielders of violence, for the support, patronage and order that only they could provide. Kings looked to monks to provide the popular legitimacy that only such a high moral vision can confer.

The result can seem ironic. If you have a strong sense of the overriding moral superiority of your worldview, then the need to protect and advance it can seem the most important duty of all.

Christian crusaders, Islamist militants, or the leaders of "freedom-loving nations", all justify what they see as necessary violence in the name of a higher good. Buddhist rulers and monks have been no exception.