“The Geneva resolutions premising their programme of action or their indicated programme of action on the basis of the LLRC is very unfortunate in that they fail to understand that the LLRC is merely a time buying process,” said Jaffna University law academic and civil society activist Guruparan Kumaravadivel in an exclusive interview to TamilNet this week. Answering a question on the 13th Amendment, he said, “it is not a starting point; it is not a reference point; it is not a basis.” The views coming from a prominent activist based in the island gains much significance against the backdrop of orchestrations in the diaspora defending the US-tabled, India-fine-tuned Geneva resolution, and renewed efforts of New Delhi in invoking the zombie of the 13th Amendment. 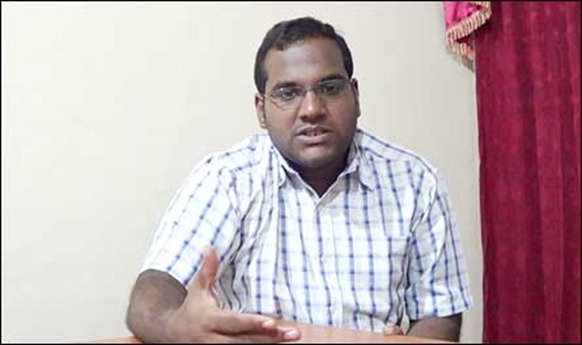 The starting point is a pre-constitutional issue, in which the Sinhala nation has to recognise that Tamils are a nation entitled to the Right to Self-Determination within their traditional homeland. This recognition should have an international underwriting, as otherwise the Sinhala-majority State could always abrogate it, Mr Guruparan explained.

LLRC was conceived not to resolve the problems faced by Tamils, but to delay international action and to preserve the status quo of the State in international arena, Guruparan said.

“Now the reason why 13th Amendment might be talked about as a starting point is because of the failure of the international community — failure on the part of India and the US in particular — in their ability of extracting from this government, from the Southern polity in general, anything furthermore,” the civil society activist observed.

If there are people who are looking at the 13th Amendment as a starting point, it is because of the pressure of India and the USA on Tamils both inside and outside of the island to be satisfied with the 13th Amendment. Particularly India may have indicated to the Tamil political leadership in the country that the 13th Amendment is the highest benchmark in terms of what a political solution should look like, he said.

“If a particular nation or a people are recognised as having the Right of Self-Determination, it is their choice as to how they exercise it,” he said, adding that “let the Tamil people decide whether that right can be exercised internally.”

On expectations about ‘regime change’ bringing in solutions, Guruparan said that in that case solutions should have taken place long back when there were so many regime changes in the past. What is needed is a change in the stance of the Sinhala nation as a whole in accepting Tamils as a nation in the island, he said.

Full text of the interview:

TamilNet: The Tamil civil society seems to have a clear stand that neither the 13th Amendment nor 13+ could be a starting point to the resolution of the conflict between the two nations, the Sinhala Nation and the Tamil Nation, in the island. What is the stand of the civil society with regards to what should be the starting-point position of the Tamil polity in any negotiations between the two parties?

Guruparan: We maintain that the 13th Amendment cannot be the basis for a solution; cannot be the starting point for a resolution as well as it can’t be part of an incremental process towards finding a solution.

It is also because, obviously, the 13th Amendment remains within a unitary structure, which is the bedrock of 1978 Constitution, within which we believe no solution can be found. I don’t want to go into the details of why the 13th Amendment is a fundamentally flawed document. I have done it elsewhere. But, because of the reason that we think it is a fundamentally flawed document we believe that it can’t be a starting point or part of an incremental process.

And, that a solution to the Tamil problem needs to start on a fresh note, on a clean slate. This means, drafting a new Constitution.

Now, answering the question how does the civil society, or rather myself envisage the starting point, we believe that there is a pre-constitutional issue here.

What do I mean by a pre-constitution issue, before the Tamil side can get into a debate, discussion and negotiation with the Sri Lankan State?

On the question of the kind of institutions that would accommodate the Tamil nation within the island of Sri Lanka, the Sri Lankan State, we believe that it is important that the southern polity, the Sinhala Nation in particular, recognise that the Tamils are a nation entitled to the Right to Self-Determination within their traditional homeland. We say that this is important because the sustainability of any institutional form or process that we come up with in negotiating with the Sri Lankan government can only be stable if it is based on a social contract between the different nations of Sri Lanka, particularly the Sinhalese, Tamils and the Muslims.

Unless the idea of the parity of status of nations coming together is the bedrock of a new Constitution; is the understanding based on which we go for a new dispensation of the Sri Lankan State, we believe that a solution may not be arrived at. For example, there might be a Federal Constitution that you can come up without actually working on the pre-constitutional question. But, if the Sinhalese – they will continue to remain as a 2/3 majority – if a new government comes in, and they decide to abrogate the Constitution and repeal the Constitution, and come up with a new one, there is nothing to stop them from doing so. This is why we say there has to be an international underwriting to the recognition on the part of the Sinhala Nation about the distinctiveness of the Tamil Nation and their right to self-determination, because only that will be the guarantee for a permanent solution to the national question.

TamilNet: Even the US-proposed resolution has its ‘starting point’ position confined to the existing Sri Lankan framework, as it only calls for the implementation of the LLRC recommendations and stops short of specifying any framework for a roadmap to resolving the root cause. While the Tamils have rejected the idea of considering the 13th Amendment as a starting point for more than 26 years, there are some sections getting deceived now that the Geneva resolution could be a starting point. What is your stand on this?

Guruparan: The LLRC is a document brought by the Sri Lankan government to buy more time and space for the government on the international platform. The LLRC was brought in, not because the drafters of the LLRC or the government that commissioned it were serious about the problems being faced by the Tamil people, but because they wanted that document to serve an instrumental purpose delaying in the possible international action, particularly with regard to international investigations for the genocide, war crimes and crimes against humanity committed against the Tamil people, not only during the last phase of war but also during the past 30-40 years.

So, the LLRC, without really going into the substance of content, is very much a tool towards preserving the status quo for the government in the international arena and the recommendations therein are supposed to achieve that purpose.

It is also true that the LLRC very much remains within the Sri Lankan constitutional framework. It really doesn’t question the nature of the Sri Lankan State itself. Hence the kind of programme envisaged by the LLRC is more about maintaining the status quo rather than reversing it.

Now the reason why 13th Amendment might be talked about as a starting point is because of the failure of the international community — failure on the part of India and the US in particular — in their ability of extracting from this government, from the Southern polity in general, anything furthermore.

So, they are now trying to convince the Tamils that they should accept something that is status quo and that we should be satisfied with the 13th Amendment.

It also may be that, particularly India, may have indicated to the Tamil political leadership in the country that the 13th Amendment is the highest benchmark in terms of what a political solution should look like.

So, owing to these pressures, it might have been the case that both, inside the country and outside the country, there are people who are looking at the 13th Amendment as a possible starting point.

TamilNet: Could you clarify your position with regards to the so-called internal right to self-determination, which some Tamil politicians say [under the pressure from certain Establishments of the international community] that the Tamil polity should themselves declare that the internal right to self-determination should be the framework under which any solution to the national question should be found?

So the Tamils can’t be asked to say that they are for the right to internal self-determination […]. Let the Right to Self-Determination be recognised and in the process – in the peace process and the negotiation process that ensues between the Sri Lankan government and the Tamil side mediated by the international community – let there a proposal come from the Sinhala Nation, as to how we can exercise that right internally within the borders of this island. And that sort of negotiation should lead to a new State of sorts […]. So let the different constituent nations within the island of Sri Lanka then to agree to what sort of the State they want to create and in that exercise, Tamils may decide at that point, to exercise their right internally within the new Sri Lankan State. And it is only at that point we can think of what sort of the exercise of the Right to Self-Determination we want to make. We can’t make a pre-commitment on that issue, legally speaking, politically speaking.

TamilNet: The roadmap to the resolution of the national conflict should have regime change, as its starting point, seems to be a message coming from certain quarters. What is your take on this?

Guruparan: If regime change would have delivered Tamils a solution then it should have happened way back in the 1950s: when DS Senanayake was overthrown by SWRD Bandaranaike and when SWRD Bandaranaike was subsequently replaced by the UNP government, so on and so forth.

When it comes to the Tamil national question, there is no difference between the Sri Lanka Freedom Party (SLFP), which is now part of the alliance called UPFA, or the UNP.

They fundamentally have very similar positions on the national question. So, any sort of regime change really cannot do much for the Tamil people.

What needs to be recognised is that this is not a real question of a problem with a particular government, but this is problem between two different nations within Sri Lanka and that the way to go about resolving it is to see how the Sinhala Nation comes around to recognise Tamil nationhood, Self-Determination and our traditional homeland.

What is the guarantee that the regime change would actually look at these things positively and deliver on them?

Anyway, a particular regime coming and delivering them is not important. What is important is that there needs to be a change of stance in the Sinhala Nation as a whole, if this problem is to be resolved.