Representatives of mainstream British trade unions, student unions, solidarity groups and Tamil activists came together on a solidarity day observation in London on Saturday, unconditionally supporting the Eezham Tamils nation’s right to self-determination. Tamil attendees of the event termed it a landmark meeting considering the principled support given by major British grassroots organizations to the fundamental demands of the Tamil nation. The British trade-union speakers at the event also promised to take further initiatives to take the Tamil issue to other trade unions across the country. 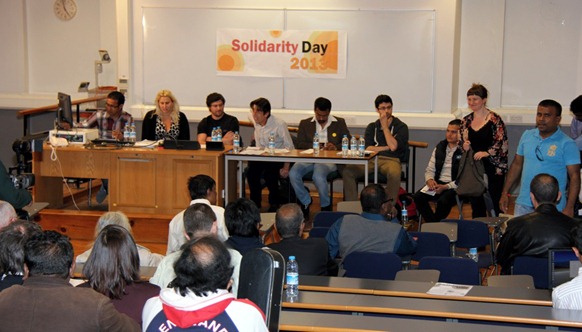 Likewise, commenting on the decision of the British PM David Cameron to visit Sri Lanka for the CHOGM meeting, Martin Powell Davies from the National Union of Teachers opined that this was a shame and in the future both Mr. Cameron and the country would regret this.

Claire Laker-Mansfield, a feminist activist from ‘Rape is No Joke’, criticized sexual abuse being continued to be used systematically by the Sri Lankan state against the Tamils.

Trade union representatives also spoke on the global injustice committed by the world powers, especially India and the USA.

Full text of the press statement issued by Tamil Solidarity, one of the organisers of the event, follows:

Solidarity Day success – event has potential to be a ‘historic event’

The Solidarity Day held in London today has been a great success.

Organised by Tamil Solidarity and the British Tamils Forum, it brought together people from the Tamil community with representatives of the trade unions, the student movement and a number of other campaigns.

Participants denounced the decision to go ahead with the Commonwealth Heads of Government Meeting in Sri Lanka in November, demanding that the decision to send Prime Minister David Cameron and Prince Charles to that meeting is reversed.

Claire Laker-Mansfield, chair of student campaign Rape Is No Joke, expressed disgust at the “complicity of the British government with the Sri Lankan regime”. The millions-strong National Union of Students has affiliated to Tamil Solidarity, pledging support for the struggle of the Tamil-speaking people. Claire said that students would have to campaign against the CHOGM meeting taking place.

The Solidarity Day marked a significant step forward in the struggle for Tamil rights, above all by strengthening the links with the trade union movement.

A number of leading trade union activists spoke at the second rally. Hugo Pierre, Unison activist and convenor in Camden schools, spoke of his visits in the past to Sri Lanka when it was clear from discussion with workers in the south and in the tea plantations that the Bandaranaike was preparing the state machinery for further reprisals against the Tamils.

He also spoke about how impressed he’d been in 2009 with the courage of the young people, who like himself, were born of immigrant parents but grew up here wanting to fight repression at home and in Britain.

Unions organise over six million working people in Britain. Not only do they campaign for their members’ interests in the workplace, and against attacks on the education, health and other public services, they also have a long history of campaign against injustice internationally.

Chris Baugh is the assistant general secretary of the Public and Commercial Services union (PCS), one of the most radical and active unions in Britain. He said that ‘solidarity’ was not just a nice idea but a most powerful weapon in the fight against the international neoliberal consensus that sees the likes of Cameron collaborating with the war criminal Rajapaksa.

He said, “PCS needs to follow the example of all unions and build solidarity with Tamils against repressive regimes and complicit governments.”

Martin Powell-Davies, member of the national executive of the biggest teachers union, the NUT, said that if Tamils and trade unionists work together, building awareness of the struggle of Tamils and building the trade unions as fighting bodies against all repression, Cameron will live to regret his participation in the CHOGM meeting.

In addition to speakers from the trade unions, the Solidarity Day also included campaigners from Turkey and Nepal, and on the campaign against the right-wing, anti-Muslim Bodu Bala Sena in Sri Lanka – among many others.

Especially among the young people there was a feeling that a big step had been taken in understanding how to fight back.