People’s participation in the polls to Northern Provincial Council will be significant to the implementation of the 13th Amendment. Since Colombo has agreed to conduct the election merely because of international pressure, people have to be prepared to resist any sabotage. The elected PC will help to end the governor’s rule and interferences in civil administration, said Tamil National Alliance’s Chief Minister candidate for Northern Province and retired Justice C.V. Wigneswaran on Monday in Jaffna, after fielding TNA’s list of candidates for Northern PC elections. Meanwhile, Colombo President Mahinda Rajapaksa implied ‘understanding’ with the candidature of Wigneswaran, when he said on Tuesday that he would be willing meet Wigneswaran to discuss land and police powers to provinces.

Speaking to media editors in Colombo on Tuesday, Rajapaksa described the election as a sign of ‘new freedom’ people in the North are currently enjoying.

Announcing a three-member commission that would be appointed by his Secretary to investigate the incidents of ‘disappearances’ during the war, Rajapaksa who waged the genocidal war said that the decision was not owing to any outside pressure.

If Tamil National Alliance (TNA) Chief Ministerial candidate C.V Wigneswaran is interested in discussing the issue over land and police powers to the provinces he is willing to meet Wigneswaran on that issue, Rajapaksa was cited saying at the media meet.

Meanwhile, in Jaffna, Wigneswaran who painted a picture of international success in making Rajapaksa to agree to the PC elections in the North, totally blacked out the compulsion imposed by certain powers on Eezham Tamils and the TNA to accept the already existing and failed model of Provincial Councils under a unitary constitution.

Through the election he was asking for a mandate from the people of the North for the 13th Amendment of the unitary constitution. The way he was appealing, the election will be certainly exploited by the powers that set the stage for the genocide to interpret that Tamils are now ‘reconciled’ to non-independence, non-federal, non-descript solution, political observers in Jaffna said.

TNA’s list of candidates for the North was finalised at a meeting presided by Mr R. Sampanthan, TNA parliamentarian for Trincomalee and Mr. M.A. Sumanthiran TNA’s nominated parliamentarian based in Colombo, who had come to Jaffna for the occasion.

Tamil problem in the island is a wrong nomenclature. It should be renamed as Jaffna problem, was the view of BJP-RSS-Shive Sena journalist Das Gupta, implying that isolated handling of Jaffna by others will silence everything.

At the height of the genocidal war in March 2009, one its main architects Robert Blake, who was then the US Ambassador in Colombo, was harping on provincial elections in the North.

“An important part of the credibility of those elections will be for the Government and other parties to choose candidates for Chief Minister who will be viewed as legitimate in the eyes of Tamils in the North,” Blake said speaking at Taj Samudra in March 2009.

“Implementation of the 13th amendment will allow communities to make decisions and have authority over the day-to-day affairs that are the most important in their lives,” Blake then said, which is now echoed by Wigneswaran.

After ending the war in genocide, Blake who became the US Asst. Secretary of State as well as other US officials, talking of ‘devolution’ of power to provinces as solution, were often hinting at ‘suitable’ hands to come from Tamils.

Events take place in a pre-arranged way to diffuse the national question of Eezham Tamils by hoodwink and intimidation; to provide avenues of blanket escape to all the culprits of the genocide, the masterminds as well as agents; to smoothly go ahead with corporate ‘development’ without caring structural genocide or annihilation of the nation and finally to set a global paradigm that committing injustice upon injustice in a silencing way is international justice, activists for alternative politics in Jaffna commented. 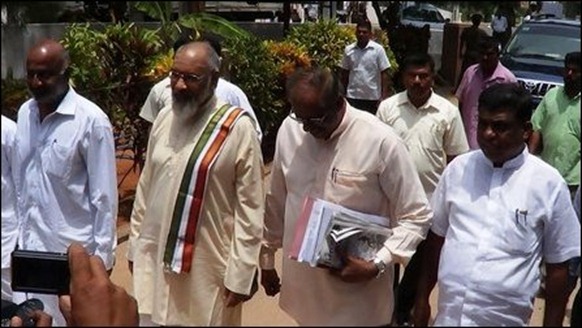 Justice Wigneswaran was not only demanding sole support from the people, but was also asking ‘mandate’ for the implementation of the 13th Amendment, which had been denounced for decades by the Tamil polity, including the TNA prior to 2009.

The success of implementing the 13th Amendment lies in the mandate given by the people he said.

The mandates in the earlier elections conducted in the times of the militants are rejected by others as they were not democratic. So if people prove a mandate now it could not be rejected, Wigneswaran said.

What respect the IC and India have for the overwhelming mandate given in unison by Tamils in the North and East in the pre-militant day free and fair democratic elections of 1977, asked the activists for alternative politics in the island.

Justice Wigneswaran not only ignores this international injustice, but also fails to tell to the world that even the present elections in the island are not free and fair as the 6th Amendment to the constitution gags Tamils from voicing what is actually their mandate, the activists said.

Wigneswaran was telling that the PC is certainly a big step from the District Development Councils for which elections were held in 1982, and people should make use of the opportunity.

He was painting a picture as though the PC is tried only now. Not the DDC, but even the PC in the combined North and East failed even when a guaranteeing IPKF was present.

Answering questions, Wigneswaran said that there are many impediments in implementing the 13th Amendment, but he would talk to Colombo on them.

The earlier Chief Minister Varatharaja Perumal, with the full backing of India failed in his talks with Colombo over the implementation. 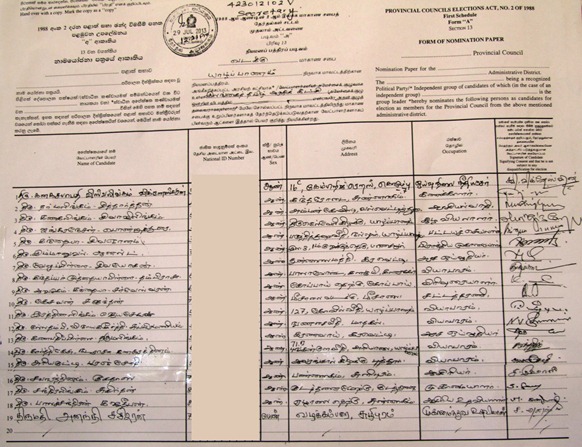 TNA has fielded 36 candidates and only 3 of them are women.

46-year-old Ms Ananthi Sasistharan, the wife of Mr Elilan, the former LTTE Political Head of Trincomalee is one of them, representing Jaffna district. She has been voicing for the rights of the missing persons. The other two women candidates represent Mullaiththeevu and Ki’linochchi districts.

Two former Jaffna University student activists, who faced detention and harassments by the SL military, have also been named.

Both, Mr. Arnold, the organiser of the ITAK in Jaffna city and Santhiralingam Sugirthan who represented the Jaffna University Student Union (JUSU) are former student activists from the Pongku Thamizh times.

Several retired school principals, teachers and civil servants have been selected as candidates by the TNA.

The General Secretary of ITAK, Mr Mavai Senathiraja, Mr M.K. Sivajiligam of TELO, veteran ITAK member and civil activist Mr CVK Sivagnanam, Mr Suresh Premachandran of EPRLF and Mr Tharmalingam Siththarthan of PLOTE were with Justice Wigneswaran while he was addressing the media in Jaffna after fielding the candidates of TNA for the PC elections.

Meanwhile, former LTTE media coordinator Daya Master, who was expected to contest the elections under Rajapaksa’s UPFA, was not fielded as a candidate.