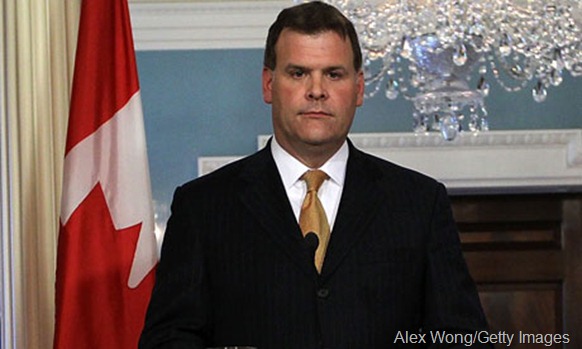 The Canadian government has launched a blistering attack on Sri Lanka‘s "appalling" record on democratic accountability as the controversy intensifies over the Commonwealth‘s decision to allow Colombo to host its biennial heads of government meeting later this year.

The Commonwealth’s general secretary said on Friday that he saw no reason to strip Sri Lanka of the honour of staging the meeting in November despite mounting international concern over the country’s failure to tackle human rights abuses and demonstrate a clear commitment to democracy and the rule of law.

John Baird, Canada‘s foreign minister, said he was stunned that Colombo was not facing censure for its behaviour.

"We’re appalled that Sri Lanka seems poised to host CHOGM and to be chair-in-residence of the Commonwealth for two years," he told the Guardian.

"Canada didn’t get involved in the Commonwealth to accommodate evil; we came to combat it. We are deeply disappointed that Sri Lanka appears poised to take on this leadership role."

Far from seeing "meaningful progress" since the last CHOGM in Perth in 2011, said Baird, the Sri Lankan government had only grown more authoritarian and less accountable and open to reconciliation.

Baird pointed to the impeachment and sacking three months ago of the country’s chief justice and her replacement with a successor who is close to President Mahinda Rajapaksa.

"Both of those actions are appalling and they show that not only have we not seen an improvement, we’ve seen a deterioration in recent months and that is causing Canada great concern," he said.

The Canadian prime minister, Stephen Harper, has repeatedly raised concerns over Sri Lanka’s hosting of CHOGM and threatened to boycott the meeting if Colombo does not show real evidence of progress.

Asked whether Harper was planning to snub CHOGM, Baird said: "Certainly nothing I’ve learnt in recent months and days would lead me to give him any contrary advice on that issue."

Baird was speaking after a meeting in London of the Commonwealth Ministerial Action Group, which describes itself as "the custodian of Commonwealth values and principles".

Although Sri Lanka was not on the agenda, the country was discussed and Baird is understood to have restated his government’s firm opposition to the decision to let Colombo host CHOGM.

At a press conference after the meeting, the secretary general of the Commonwealth, Kamalesh Sharma, appeared to contradict the Canadian position when he told reporters that "no member government had indicated remotely that it wished to change the venue".

He also defended the CHOGM decision, saying that he had found Sri Lanka to be "engaged and willing" to improve itself through measures such as institution-building.

Sharma denied suggestions that the Commonwealth risked compromising its credibility by refusing to take Colombo to task over accusations of war crimes, torture and institutional corruption – or for its failure to bring to justice the alleged killers of Khuram Shaikh, a British man who was murdered on the island in 2011.

"I think the credibility of the Commonwealth is increasing right now because as far as the judicial sector is concerned, we are the ones who are working with them on what can be a solution to the pluralities and institutional confrontations that they’ve had in the past," he said. "I think the way in which we are acting and the way in which we are planning to make real progress on the ground is actually a sign of this institution’s relevance in the difficulties which are faced by member states rather than the other way around."