The obsession of utmost priority for a section of TNA leadership is to satisfy the Sri Lanka saving agenda of New Delhi and Washington, by interpreting the TNA victory as supersession of the Vaddukkoaddai Resolution based mandate of 1977, political observers in Jaffna commented on a statement made by the TNA leader Mr. R. Sampanthan, aided by Mr M.A. Sumanthiran, at a press conference convened in Jaffna on Sunday. Sampanthan talking of united and undivided country described the TNA victory as a clear verdict of Tamils, unprecedented in the political history of the island. Answering a question raised by an Eezham Tamil journalist that how then he views the 1977 verdict, Sampanthan said that there is nothing wrong in stating that the present victory is greater than the 1977 one. Sumanthiran was heard aiding him in answering the question.

Without giving an opportunity to the genocide-affected people to decide on their political status, and without proving anything on demilitarization, territorial integrity of Eezham Tamils, prevention of demographic genocide, internationally recognizable constitutional guarantee for the nation of Eezham Tamils and even an international investigation on the war crimes, New Delhi and Washington are able to extract such assurances and interpretations from a section of Tamil leadership that jump at a hollow and nothing-new PC election, the observers commented.

New Delhi and Washington thus challenge the very self-respect of global Tamils and pose an ideological challenge for the entire humanity in facing erring Establishments. The idea is to particularly silence Tamil Nadu and the diaspora and that has to be ideologically and practically addressed at by all Tamils concerned, the political observers in Jaffna said.

The concern of Eezham Tamils today is not the Sinhala State alone, but an international system that didn’t shun even genocide to uphold a State. Tamils cannot be a Stateless people anymore in such a world, the observers further said.

Stating that the Tamil people have given a clear verdict in an ‘unprecedented election victory in the political history’ of the island, Sampanthan said that “within the framework of a united, undivided country, the Tamil people want to live in security, safeguarding their self-respect and dignity with adequate self-rule to be able to fulfill their legitimate political, economic, social and cultural aspirations.”

When an Eezham Tamil journalist questioned how Mr Sampanthan defined the recent victory as unprecedented compared to the unprecedented victory of Vaddukkoaddai Resolution based 1977 General Elections, Mr Sampanthan said “It was also an overwhelming victory.” But then he was seen being reminded of a point of contrast by Mr Sumanthiran. [Sumanthiran tells Sampanthan to mention first-past-the post system].

Continuing the reply Sampanthan said: “The 1977 was an election conducted throughout the island. This election is held in the province. It was an election conducted under a different method. It was a first-past-the post vote system, the one who was accorded with the largest votes in an electorate won the electorate, but this election is conducted under the proportional representation system. It is an important difference. All the parties can secure their portions under the proportional system. It is not an easy task to acquire such victory under the proportional system without an overwhelming support from the people. With the realization that there is a huge difference between the methods of election in 1977 and this election, I think there is nothing wrong in stating that this victory is greater than the victory in the 1977,” Sampanthan said. 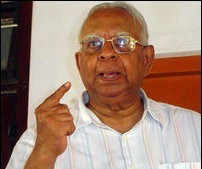 Mr Sampanthan also said: “We are committed firmly to the full implementation of the 13th Amendment to the Constitution, and building upon the 13th Amendment to the Constitution: first to bring about meaningful devolution, which must result in a political solution that is reasonable, workable and durable, and will give the people of the North –and also the people of the East – a substantial measure of self-rule, enabling them to fulfill their legitimate political, economic, social and cultural aspirations.”

When a question was posed to the chief minister designate CV Wigneswaran on his message to the Sinhalese people, Mr Wignewaran said: “We are citizens of the same country. It is time for us to get together and live in peace. We have formulated a political solution on the basis of federalism. If only they do not have this bigheadedness to think that federalism is separation, it would be possible for us to work out a system of political institutions, which could work together at these various levels, where the central government looks after certain aspects of governance and the peripheral regions look after themselves. The message that I have to give to the Sinhalese is that they should educate their politicians.”

CV Wigneswaran, responding to a question on how he interpreted the election victory of the TNA under the prevailing government antipathy for federalism, he responded by stating:

“It is not a symbolic victory for the Tamils, it is a symbolic victory for the Sinhalese and for the government. Because, for the first time, they seem to be really coming to terms with the fact that the people of the North have certain individuality of their own and that they would like those to be taken into consideration and that is why they have given such a vast majority for our party. So, this is a matter that actually concerns the government and the Sinhala people as to come to a conclusion as to whether they are prepared to live with us in peace, handing over to us powers, which are legitimately ours, reasonable powers which stands in line with the international covenants and if they come to that conclusion then there is no need for us to worry because then there would be easy agreement as to how we should work this out. So, it all depends on the government as to what steps they want to take in the light of such vast majority given by the people of the North in this election”

Responding to another question by a Tamil Nadu journalist on the possible propaganda by the SL government that it conducted a ‘peaceful election’ in North as an effort to resolve the ethnic question in a peaceful manner, Mr Wigneswarn responded by saying that the elections were not conducted without problems and that the Sri Lankan government was speeding towards finding ways to cancel the elections. But, because of Indian pressure, the efforts were taken to conduct the elections, he said.

Mr Sampanthan was more open in one of his response to a question and said that India had intervened at a crucial time right before the provincial elections when a decision was made at the cabinet of ministers in the South to scrap the NPC elections by bringing in urgent amendments to the Sri Lankan Constitution. According to Mr Sampanthan, India was playing an active role after the war, in resolving the conflict. The international community was respecting the opinion of India, he said. The international community would not act against India on our matters, Mr Sampanthan said reiterating that India is engaging in a constructive manner on the Tamil question.

A Tamil Nadu journalist asked what was TNA’s stand with regards to the people of Tamil Nadu. Mr Sampanthan responded by stating that their support is crucial, but the actors should be in sync with same message and be united. Not only Tamil Nadu, we need the support of all different types of political parties in India – not only the Congress Party, the BJP, the leftist parties and the regional parties of different states, he said. There are support for Tamil demands among many of these. While realizing the significance of the support from Tamil Nadu, we seek the support from the entire Bharat, he said.

There was no journalist at the hall to challenge Mr Sampanthan that a unanimous message has in fact been passed in the Tamil Nadu Assembly calling for referendum among Eelam Tamils.

However, a journalist was there to question on a controversy that TNA was stressing on the participation of the Indian PM at the CHOGM while Tamil Nadu was protesting such participation. Mr Sumanthiran, assisting Mr Sampanthan in relaying the questions from the hall, was again heard whispering into the ears of Sampanthan, asking whether he could tackle the question. But Sampanthan chose to respond and said stating that there were different opinions on the matter. India has not made a decision and there are still two months left for the CHOGM meet. “Now we have concluded the election. We will carefully deliberate the issue, and if necessary, we would talk to India and arrive at a decision,” he said with a hint: “But, any such decision should be aimed at helping to resolve our conflict.”

When a question was posed to Sampanthan to clarify TNA’s stand as some of the TNA candidates had campaigned among the people with promises that Tamil Heroes Cemeteries that were bulldozed by the SL military, would be re-built, if the TNA was elected to NPC with an overwhelming majority, he said it would be wrong of him to interfere into the affairs of the provincial government, but said if and when such a proposal is brought before the PC that issue would be deliberated. He added that representatives elected by a people would be respected the emotions of the people. Mr Wigneswaran also echoed the same message.

Responding to a question of PC resettling displaced Muslims, Mr Sampanthan said TNA was firm in resettling the uprooted Muslims and said such a mutual understanding has already been established with the Muslim community. Asmin Ayoob, a Muslim candidate who represented the Muslims in Mannaar was also present at the stage with the fellow TNA candidates.