On Monday, writing a letter to DMK chief Karunanidhi, requesting him to persuade Thoazhar Thiyagu to call off his fast unto death campaign, New Delhi Establishment’s Prime Minister Manmohan Singh said that “ a decision on the issue of my participation in the CHOGM conference will be taken only after considering all relevant factors, including the sentiments of your party and the Tamil people.” On Tuesday, Chennai-based V. Suryanarayan, who has spent a lifetime in serving New Delhi’s security–intelligence outfits and in opposing independence of Eezham Tamils, wrote that if New Delhi boycotts CHOGM it will harm the NPC ‘experiment’ and “it would be playing into the hands of the fanatical sections among the Tamil diaspora.”

The following are comments received from a Tamil activist for alternative politics in Jaffna: 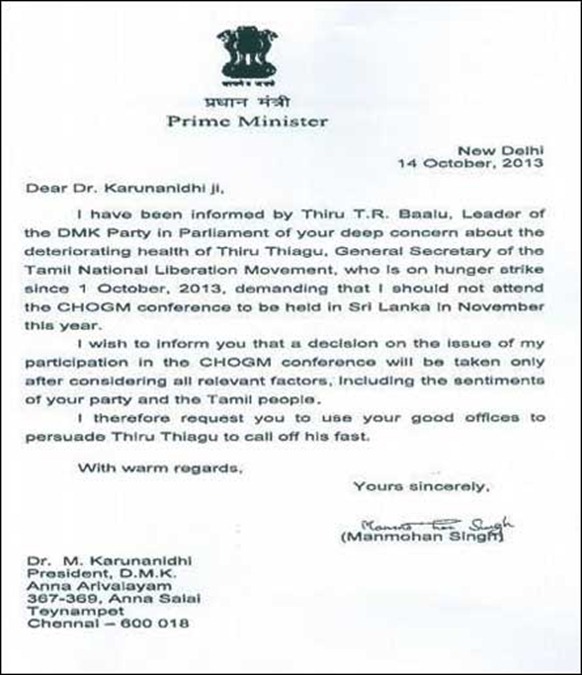 Tamils in the island, in Tamil Nadu and in the diaspora have to carefully peruse how the NPC ploy is now used to save the genocidal culprits in Colombo and their perpetrators in the outside Establishments.

It should also be clear why C.V. Wigneswaran, installed by New Delhi by ingenious manipulation of the opportunity of voting, was condemning CHOGM boycott call, even before his election.

The worst blow to the self-respect of Tamils all over the world is the thinking in the Establishments and in their decades-long ‘advisory’ sections that the Stateless nation of Tamils that was led into genocide by deceit and by keeping the world blind by engineering information, could easily be deceived in politics too, without conceding anything fundamental.

“What could you do about it if we all in the Establishments have decided for it,” is the attitude that is shown to Tamils and that is systematically orchestrated in the psy-op campaigns.

Tamils could do a lot if they could realise the ultimate adversaries in the Establishments and the illusions created by them.

As a beginning, elected NPC members in the North could take a stand on the CHOGM, ignoring Wigneswaran, so that Manmohan Singh and the world will know what Tamils in the island think. Eezham Tamils who have voted in the NPC election also will know about the candidates they have voted in the New Delhi-engineered election.

Knowing how the DMK chief was deceived, or allowed himself and along with him took the entire Tamil Nadu to get deceived by New Delhi during the genocidal war, Tamil Nadu should be prepared for a struggle of proving geopolitical strength not only to New Delhi but also to Washington and London.

Tamil Nadu Chief Minister Ms. Jayalalithaa has passed a unanimous resolution in the State Assembly in 2011, calling for New Delhi to facilitate indictment of Sri Lanka for war crimes and crimes against humanity at the UN. The resolution also called for economic sanctions by India against Sri Lanka.

In 2013, initiated by the Chief Minister, the State Assembly once again passed a unanimous resolution, this time calling for an UN-conducted referendum among Eezham Tamils in the island as well as in the diaspora on the question of a separate Eezham. The resolution also reiterated the earlier resolutions, specifying that the investigation should be on the crime of genocide along with war crimes.

As none of the resolutions by the representatives of Tamil people has been honoured by New Delhi, and as the ultimate outcome is a bold hoodwink in the name of ‘experimenting’ with an already existing NPC under a unitary constitution, Tamil Nadu should get a cue that the genocide investigations have to be first carried out in India itself.

Perhaps, conducting such an investigation in India on the decades-long facilitators of Eezham Tamil genocide will almost be like conducting an international investigation, and this could effectively arrest all further plans of genocide, now unrestrictedly designed and carried out by all sort of extra-parliamentary elements in India. Demand for such an investigation could be in the manifesto of Tamil Nadu parities thinking of next coalition at New Delhi.

The diaspora may have to come out of its ‘articulators’ who virtually serve the Establishments by hijacking and sitting on any international struggle of Eezham Tamils.

Aspiring for Tamil Eelam is a righteous right of every Eezham Tamil coming from a long genocide-affected nation.

While the demand for international investigation on Sri Lanka’s genocide and the right of the diaspora to have a say in the referendum on a separate Tamil Eelam are matters unanimously resolved in the State Assembly by the people’s representatives in Tamil Nadu, whom Suryanarayan is referring to as “fanatical sections among the Tamil diaspora?”

Either by advising the security-intelligence outfits of New Delhi or by relaying their views to engineer opinion, a mandate-less esoteric group, fanatically opposed to the independence of Eezham Tamils, was long contributing and is contributing to genocide. This itself is a matter for political as well as academic investigation in India.

The Chennai-based, retired Senior Professor V. Suryanarayan’s advice for India to not boycott CHOGM in order to facilitate the NPC “experiment” under the “highly respected Chief Minister Wigneswaran,” and to not “play into the hands of the fanatical sections among the Tamil diaspora,” appeared in the website of the Institute of Peace and Conflict Studies (IPCS) in New Delhi, directed by Dr. D. Suba Chandran.