A section of uprooted Tamil families from Champoor, now staying at one of four so-called welfare centres in Trincomalee, staged a protest on Saturday carrying slogans that demanded justice for genocide and urged global attention on the continued refusal by the Colombo government in allowing them to resettle in their own lands in Moorthoor East. On Friday, a day before the protest, the occupying Sri Lankan military intelligence operatives, went on a house-to-house and camp-to-camp round instructing the Tamils not to take part in any protest during the ‘Sri Lanka CHOGM’. Subsequently, the protest was held in the premises of Ki’liveddi camp. The SL police who came to the Ki’liveddi camp on Saturday confronted the protestors and said they should not carry any placards with slogans. However, the uprooted people were firm in staging their protest with the presence of Tamil politicians. 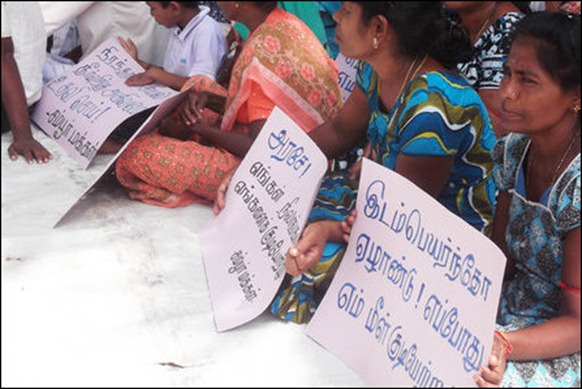 The Tamil councillors present at the protest told media that they backed the event amidst the prevailing harassments to pass a message to the global community that Eezham Tamils are languishing in East while the heads of Commonwealth meet in Colombo was giving undue recognition to a State that has committed genocide on Eezham Tamils.

The uprooted people have not even provided refugee relief allowance for the last several months, the TNA councilors told local media.

When events of global significance, such as the CHOGM meet in Colombo or the Human Rights Council Sessions in Geneva, a few uprooted people were hurriedly relocated from camps or elsewhere to some of their occupied villages, but they were not provided any meaningful assistance to resettle or resume their livelihoods, the Tamil councillors said.

During the recent Geneva session, 89 families were brought to Kooniththeevu, 139 familes to Navaratnapuram and 87 families to Choodaik-kudaa. Now, 8 months have passed, the families are still languishing as before. The people have no means to travel to their village as the road runs through Champoor, which is occupied by the SL military.

“This is a systematic structural genocide. Without justice for the Tamil genocide, there will be no permanent solution. Now, with Sri Lanka CHOGM in Colombo, the international community and even the visiting journalists to Colombo have completely forgotten the East,” a councillor of the Eastern Provincial Council said.

Seven Tamil National Alliance (TNA) parliamentarians and most of the Tamil councillors in the opposition of the Eastern Provincial Council (EPC) from the three districts of Trincomalee, Batticaloa and Ampaa’rai came together to the protest led by the opposition leader S. Thandauthapan. TNA Parliamentary Group Leader R. Sampanthan was present there with TNA parliamentarians from East Pon. Selvarasa, P. Ariyanethiran, and S. Yogeswaran and the MPs from other districts S. Sritharan, Selvam Adaikkalanathan together with the national list MP MA Sumanthiran.

Former MPs Thuraratnasingam and K. Thurairasasingham (now a councilor in the EPC) were also present at the protest with EPC members of TNA from Trincomalee, K. Nageswaran and J. Jegatheesan and from Batticaloa G. Karunaharan, N. Indirakumar (Prasanna), R. Thurairetnam, and M. Nadarasa and M. Irajeswaran and T. Kalaiyarasan from Ampaa’rai.

There are more than 2,500 families consisting of at least 6,500 people, who are forced to stay in camps or elsewhere with their relatives and friends, a TNA MP told TamilNet on Saturday.

The SL militarization and so-called ‘economic zone’ of occupation has rendered the people of 22 villages in Moothoor East in a worse situation than during the times of the war, the MP further said.

“The people are denied of the freedom of expression. Just a few hours before Ms Navanetham Pillay was about to visit these camps, vociferous persons in these camps were taken into custody by the military,” a TNA councillor reminded.

On Saturday, the TNA leader R. Sampanthan present at the site told the SL police that there was no need for the organizers to seek prior permission to stage peaceful gatherings of religious nature.

The special squad of the occupying Sri Lanka Police trying to block the gathering was arguing that the protestors should not hold placards publicly. The SL Police OIC MA Naufer was claiming that the uprooted people were standing in ‘state land’ while protesting.

However, the presence of TNA parliamentarians provided the space for the people to raise their slogans despite their criticism that TNA MPs only visit them on occasions of global significance apart from when they visit them seeking votes.