The British Prime Minister, David Cameron, after returning from Colombo Commonwealth meeting, said in an article that appeared in the Arab News, that there should be a transparent, credible investigation into alleged war crimes in Sri Lanka. But he reneged on the time frame pronounced for the completion of the inquiry. In Colombo, Cameron said, "Let me be very clear, if that investigation is not completed by March then I will use our position on the UN human rights council to work with the UN Human Rights commission and call for a full, credible and independent international inquiry." However, in the Arab News, likely issued to blunt expectations of March completion of investigations, Cameron said, "if those investigations were not begun properly by next March, we would call for an international inquiry through the United Nations."

Observers commented that for Sri Lanka, which has evaded strictures from the International community for four years after the war, and have continued unabatedly the cultural genocide of Tamils with land grabs, suppression of freedom of expression and right to dissent of the Tamils, Cameron’s sudden twist on the March deadline might provide the wiggle room to Sri Lanka, the "land of Commissions," to escape from facing true justice for committing the "crime of the century," the killing of more than 70,000 Tamil civilians (UN’s Petrie report estimate) in the killing fields of Mu’l’livaaykkaal in May 2009.

Full text of the article written by Cameron in Arab News follows: 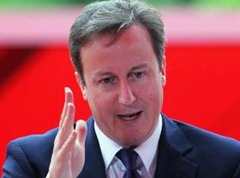 IT’S now over a week since I returned from Jaffna and the images still both haunt and inspire me. The visit I made to the north of Sri Lanka was fascinating — you can get all the briefings you like but nothing can replace seeing the situation for yourself.

There were those who said I should stay away from the Commonwealth Heads of Government Meeting in Sri Lanka. They said that by going I was giving legitimacy to what has happened in the north of the country. I couldn’t disagree more. By going we were able to shine a light on what more needs to be done.

The end of the civil war in Sri Lanka is a massive opportunity but the issues now need to be grasped. This isn’t about imposing a Westminster view of the world. It’s about standing up for the values that all Commonwealth countries have signed up to. In turn, the rest of the world should recognize political leaders when they get things right.

So what needs to happen? First of all, there should be a transparent, credible investigation into alleged war crimes. No one wants to go back to the days of the Tamil Tigers, a brutal terrorist organization. But equally, the Sri Lankan government cannot look the other way. When I met President Rajapaska I pressed for an investigation to take place — and I made clear that if those investigations were not begun properly by next March, we would call for an international inquiry through the United Nations.

Second, there needs to be greater progress on human rights across the board in Sri Lanka: Genuine freedom of expression and a free media, an end to the intimidation of journalists and human rights defenders and action to stamp out torture.

Finally, there needs to a genuine reconciliation between communities. Sri Lanka is a beautiful country with enormous potential in the years ahead. But for too long it has been blighted by conflict. If Sri Lanka takes the opportunity to heal these old wounds then there is the prospect of a much brighter future for all its people.

I know that for many readers the situation in Sri Lanka is deeply personal. It’s not about faceless diplomacy — it’s about your families, friends and their future. So believe me when I say it that we will do everything in our power to help. I’m determined that we play our part in building a brighter future for the people of Sri Lanka and laying the ghosts of the past to rest.

AN: Probe war crimes against Tamils