A Tamil student from Aaraip-pattai (Aaraiyampathi) in Ma’nmunaip-pattu division of Batticaloa district was rushed to the hospital in serious condition on Saturday, when he attempted to commit suicide by self-poisoning just a few hours before he was supposed to travel to the notorious Minneriya camp of the occupying SL military to attend an enforced indoctrination programme for all new students in order to become eligible for university entrance. The SL military is conducting a genocidal subordination in addition to the psychological pressure. There are students who lost their hard earned university admission as they were not able to secure the money needed to spend on meeting the demands of the military indoctrination programme, under the so-called ‘leadership’ indoctrination, the students from East say.

A section from the letter sent to Tamil students by Dr Sunil Jayantha Nawaratne, the Secretary of Ministry of Higher Education in Colombo

23,125 students eligible for university entrance under 86 various disciplines throughout the island are to undergo the SL military run indoctrination programme in 21 military camps in three different batches at each camp. The programme lasts for 3 weeks for each batch. Around 8,000 students were ‘trained’ at the military localities across the island in November – December 2013.

PDF: [Tamil] Instructions to Tamil students by Sunil Jayantha Nawaratne, the Secretary of Ministry of Hig

The training programme for the first batch started on 25 November at Minneriya. On the very first day, the SL military instructors displayed certain photos from the final days of genocidal onslaught on Vanni targeting to inject feelings of inferiority among the Tamil students while making the Sinhala students celebrate a ‘military victory’ singing ‘victory songs’ in Sinhala in a follow-up ‘cultural’ programme a week later.

The SL military instructors verbally abused the Tamil students, who walked out from the show. They had also warned the students that they would ‘identify’ and ‘abduct’ the ‘unruly students’ outside and warned the students ‘not to spoil’ their future.

Following this, the SL military instructors gave a Tamil student from the Faculty of Engineering in Jaffna a harsh military punishment by instructing him to walk round the playground wearing only his underwear. The ‘punishment’ was meted out on the Tamil student stating that he had ignored the ‘procedure’ to cover himself with a towel when changed his underwear inside the male hostel.

While claiming that the military training was seeking a ‘positive thinking’ what takes place in reality was the indoctrination of ‘genocidal thinking’ on Sinhala students, Tamil students who have gone through the first batch have said.

The SL military carried out a genocidal onslaught on the nation of Eezham Tamils, and the so-called military victory was made possible by the powers and countries that abetted the Colombo regime, was the lesson they had learned by going through the SL military’s genocidal training programme, the Tamil students in Batticaloa said. 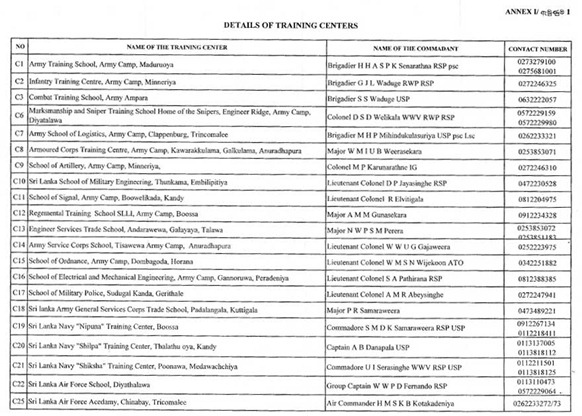