While in the western liberal democracies advanced DNA-based evidence collection has been the staple of modern crime investigations since the advent of DNA testing in 1985, in Sri Lanka DNA testing on Tamil victims have been systematically blocked by Colombo likely as part of the politically sanctioned strategy and forced on the subservient judicial branch to suppress evidence of Sinhala military criminality. While the blocking of Maanthai skeletal findings is the latest in Colombo’s involvement in suppressing possible military complicity, the results of the DNA testing of the body of the popular Catholic priest Rev. Fr. Jim Brown, whose mutilated torso was found at Pungkudutheevu sea on 14 March 2007, was also suppressed by Colombo. Colombo media, under direct and indirect threat from Rajapaksas, self-censored the coverage of the Brown story in 2007.

The Medical legal officer at the hospital confirmed that blood samples from Fr Brown’s parents and remains of Fr Brown’s body parts were received by the hospital and the hospital would soon be completing the DNA identification.

While the the Kayts Court Judge was waiting for the official confirmation on the findings to be released by the Ragama hospital, the Hospital failed to submit the DNA report to the Kayts court.

"DNA signature obtained from biological material (skin, hair, blood and other bodily fluids) has emerged as the most reliable physical evidence at a crime scene, in the last few decades. While genocide-related DNA details will likely involve unearthing what is possible from the remnants of mass graves from the deliberate military acts of concealing, and/or destroying the evidence, individual cases of intervening in DNA testing to avoid possible criminal culpability has been a distinct hallmark of the current Rajapakse regime. International community cannot be blind and immune to such blatant acts by Colombo, and have to intervene to fulfill the moral and legal obligations," a spokesperson for Tamils Against Genocde (TAG-US), an activist organization said.

"Similar to the legal and political lobbying action being taken on the ACF case where 17 Tamil aid workers were allegedly killed by the Sri Lanka military, and on the Trinco-5 case, where five innocent Tamil students, all under 20, were shot dead by Sri Lanka military, expatriate Tamils should raise the profile of the Fr. Jim Brown’s case in the international arena," TAG said, adding, "the evidence of the DNA report will likely be still available in hospital records, or evidence can be detected on possible illegal spoliation, or a disgruntled/morally superior Ragama hospital employee might be willing to give verbal testimony."

Rev.Fr. Thiruchelvam Nihal Jim Brown, 34, Parish Priest of Allaippiddy and his aide Wenceslaus Vincent Vimalan, 38, disappeared on 20 August 2006 after being interrogated by the Sri Lanka Army at Ma’ndaitheevu checkpoint.

The Catholic clergy and Jaffna residents organized several protest actions urging the SLA to release information on the disappearance. The special envoy to the Pope too visited Jaffna in this regard. 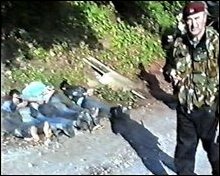 Forensic DNA testing provided critical evidence that was used to hold individuals and nations accountable for crimes against humanity and genocide. The rapid advances in the understanding and application of not only the science of forensic DNA testing, but also its legal-judicial implications, permits such testing to be used in a new context – to help deter violence, systematic rape, and genocide.

Srebrenica became synonymous with genocide and also serves as the example of how large numbers of DNA-led identifications can bring accountability on both individual and national scales, authors of referenced report say. During one week an estimated 7000-8000 mostly Bosniak men went missing in the Srebrenica area and Units of the Army of Republika Srpska were accused of the massacre. While Srpska denied the killings, as mass graves began to be uncovered that contained hundreds of bodies and body parts, the once stead-fast denial of human right violations gave way to overwhelming evidence of large-scale killings of what appeared to be unarmed civilians, the report said.