(Sri Lanka Guardian) Mahinda Rajapaksa made his parliamentary debut in 1970, having been successful in that year’s General Election. From then till 2005, when he became President and Head of State, he had hardly uttered a word about the country’s foreign policy, in any forum. Even on rare occasions when he did, he spoke against Israel, while promoting the cause of Palestine and its people. Mahinda’s first parliamentary speech was proposing the vote of thanks for the Throne Speech of the 1970 United Front (UF) Government. In that speech, Mahinda thanked the government for its bold decision to sever diplomatic relations with Israel. 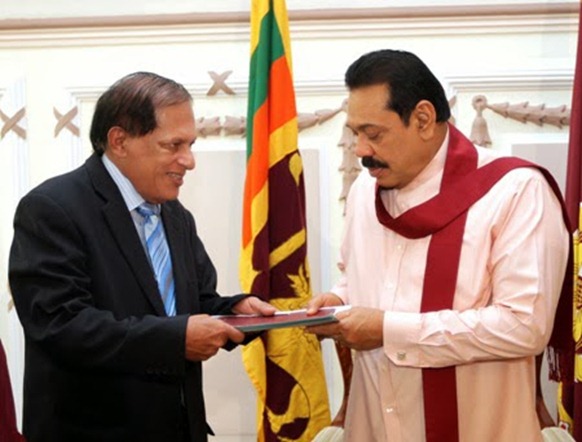 Following is an extract from his speech on that occasion: "The establishment of diplomatic relations with German Democratic Republic (GDR) and the Provincial Revolutionary Government of Vietnam, and also abrogation of diplomatic ties with Israel are encouraging signs that the government is committed to a non-aligned foreign policy, which is the aspiration of the people."

More importantly, when the Palestine Friendship Association was established 1975 Mahinda became its first President. In this capacity, Mahinda worked assiduously to raise awareness about the Palestinian problem among the people of this country and mobilize support and sympathy for their cause.

When he returned to Parliament in 1989, once again he took up the mantle of championing the cause of Palestine as and when it arose in the House. The then government under Ranasinghe Premadasa had closed down the Israel interest section in this country; yet, it was secretly buying weapons from that country. Mahinda was highly critical of the duplicity of the government. Following extract from a speech he made in Parliament on 22-04-1993 is ample proof of his antipathy over prevailing state of affairs in the country.

"Ostensibly, to please Palestinians and Muslims, the government has closed the Israel Embassy in this country. But, it is only an eye-wash. The government is buying weapons from Israel through an Israeli agent. For instance, ‘night vision’ binoculars are supplied to the Security Forces by an Israeli supplier. Strangely, the LTTE also buys these night vision binoculars from the same Israeli agent. Plainly, the government is misleading the Muslims of this country. This is because hefty commissions change hands when it comes to buying weapons from Israel. This calls for a thorough investigation."

When Chandrika came to power in 1994, she wanted to reopen the Israel interest section, which had been closed earlier. But, Mahinda opposed it. With the support of the Muslim Members of Parliament he launched a strong protest against the government move to re-open the Israel interest section. As part of the protest launched by them, a group of MPs led by Mahinda issued a media statement quoted below.

"We, the undersigned Members of Parliament, whose signatures appear below, appraise the government of the under-mentioned factors. Eleven years ago, on 6 June 1984, former President J.R. Jayewardene, allegedly because no other country was willing to help Sri Lanka to contain the Eelam War, which was then essentially in its first phase, permitted the opening of the Israeli Interest Sections in Colombo with the objective of helping Sri Lanka to crush the LTTE.

The Israeli help in Sri Lanka had not been a success is a fact admitted even by the Israelis themselves, as evidenced in the book The Israeli Connection – Whom Israel Arms and Why, written by Benjamin Beit Hallahmi, a Jewish lecturer in the University of Haifa, Israel. After six years of Israeli failure, it was the UNP administration itself, which terminated diplomatic relations with Israel on 20 April 1990.

Sirima Bandaranaike, in a statement published in the Sri Lankan papers on 6 October 1991 and which received worldwide publicity particularly in the Middle Eastern countries stated inter alia:

"When the SLFP came to power in 1970, one of the first steps we took was to close down the Israeli Embassy and send its staff out of the country."

During a press interview in Hong Kong, reported in the papers of 1 June 1984, President Jayewardene admitted that the Israeli Secret Service Organization, Mossad, was helping the government to put down terrorists. The so-called ‘Israeli Interests Section’ was only a false forum for the notorious Zionist terror organization, Mossad, which has been responsible for the torture, mutilation and massacre of untold numbers of Palestinians living in the West Bank and the Gaza strip.

The Island on 26 September (1991) carried an account of a recent interview with the ex-Mossad officer, Victor Ostrovsky, in which he has categorically stated that Israel provided a variety of equipment to the Tigers, giving a list of highly sophisticated weapons. He points out that the deadly use of landmines, which has killed and continues to kill our own soldiers in large numbers everyday is the handiwork of the Israelis.

Israeli supply of arms to the LTTE has been confirmed by the Australian Federal Police in a report published in February 1992 in the Telegraph Mirror of Sydney, which reported the Australian Federal Police cracking a massive airline ticketing fraud involving some businessman in Sydney. According to this report, secret meetings had taken place in Israel with arms dealers, for the purchase of weapons which had been sent to Tamil guerrillas in Sir Lanka, according to the investigations. A former Observer Journalist, Muditha Dias, had filed a report from Sydney which was published in the Observer of 16 February 1992, under the title ‘Australian Police confirm Israeli supply of arms to LTTE,’ according to which some of the Sydney based businessmen had visited Israel thrice in 1991 to arrange shipments of arms to the LTTE.

According to Mervyn de Silva, a reputed Sri Lanka journalist, considered an authority on Middle-Eastern affairs, it is dangerously foolish to assume that Israeli national interests coincided with Sri Lanka’s national interest and some particularly with Sinhala interest. According to Mervyn de Silva, "There are over 600 so called ‘private’ but actually State supported export-oriented companies in Israel. The sale of arms and expertise is money spinning export industry in Israel. That industry thrives on conflict, the proliferation of conflict, not its resolution.

"In our view, even after six years of active Israeli involvement in Sri Lanka’s struggle against the LTTE, the Israelis failed to contain the LTTE, because Israel never wanted to. Israel’s objective was proliferation of conflict and the upkeep of its armament export industry, in which Israel succeeded. It must be obvious to any patriotic Sri Lankan that the national priorities of a country exporting arms such as Israel are obviously the cause of this country’s curse and such priorities are obviously in conflict with the national priorities of Sri Lanka.

"In today’s context, we understand that there are a large number of countries willing to help Sri Lanka. Whilst Sri Lanka may obtain arms from any source supplying them at the most competitive price, we wish to convey our strong opposition to Sri Lanka reopening diplomatic relations with Israel, as such moves are inconsistent with the national interest of Sri Lanka."

When Mahinda became President, his Foreign Minister was Mangala Samaraweera. He represented the country at the 2006 UN General Assembly Sessions. When a resolution was moved calling for support for the Palestine cause, he walked out without voting, which irked Mahinda considerably. It was common knowledge at that time that Mangala’s sacking from the Cabinet was mainly due to his action at the UN and for not voting in favour of Palestine.

Mahinda, who was an erstwhile opponent of Israel, has all of a sudden done a volte-face. Now he has gone to Israel for a State visit, creating a first in the process; that of being the first-ever Sri Lankan Head of State to visit that country. Though belated by nearly five years, he may have been motivated by a sense of gratitude for the help given by Israel to our war effort and had decided to offer his thanks personally. One may not be far off the mark, if one were to surmise that Mahinda’s latest manoeuvre is to influence any US involvement in a possible adverse UNHRC resolution at Geneva in March 2014, with Israel’s backing.