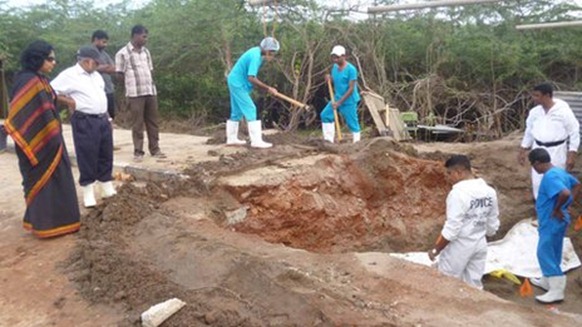 The remains were recovered during excavation work at the site in Mannar district.

They bring to 31 the number of skeletons or partial skeletons found there.

This is the first mass grave to have been unearthed and forensically examined in the former war zone since the end of the separatist war in 2009.

Thousands of civilians perished in shelling towards the end of the conflict against Tamil Tiger insurgents, but it is possible the find dates from considerably longer ago.

The mass grave was discovered by construction workers laying a water pipe.

There has been no clear determination of the age of the bodies, or who the victims or killers were.

A government medical official overseeing the excavation, Dhananjaya Waidyarathne, said the bodies had been buried in layers. 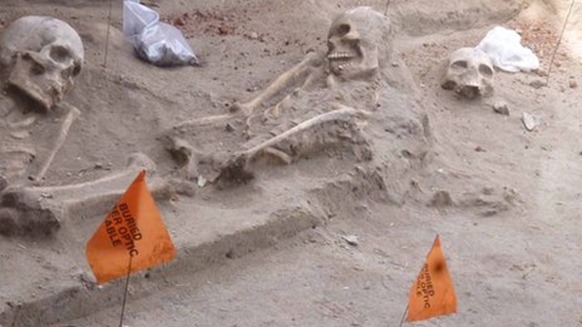 Scientists are yet to determine the age of the bodies

"Unfortunately the top layer of the bodies have been disturbed by the road construction works," he said.

Some of them had been fragmented by earth-moving machinery before the discovery was reported.

Mr Waidyarathne also said he was "very much worried" that no signs of clothing or human-made artefacts had been found in the mass grave.

He did not elaborate further on the possible timescale of the tomb, which is situated adjacent to Thiruketheeswaram, a prominent Hindu temple.

The Roman Catholic Bishop of Mannar, Rayappu Joseph, told the BBC there should be an independent international investigation into it.

He said he understood the bodies included those of "small children and ladies", and that it might have been that a busload of people were killed.

The bishop added that the site had been under army control "for a long time" and that although the Tamil Tigers had a presence in the area, they would not have been capable of making such a large mass grave.

But police spokesman Ajith Rohana, said the area had been under Tamil Tiger control since at least 1993. He declined to comment on the possible culprits.

The grave is already becoming the subject of a Sri Lanka-style propaganda battle in cyber-space.

A pro-government website, asiantribune.com, said it was "suspected" to be the work of the Tamil Tigers and there was a "mischievous and calculated design to blame the Sri Lankan Security Forces".

But the pro-separatist tamilnet.com has called the grave "genocidal", implying it was the work of the government side. It criticised reported plans by the government to send the remains to China for forensic examination.

In December 2012, another mass grave containing at least 150 bodies was discovered in central Sri Lanka. A forensic archaeologist said he believed it dated back to the time of a Sinhalese leftist insurgency in the late 1980s.