A nation of people long affected by genocide exposing the past and present modus operandi of the genocide partnered by leading Establishments of the world, and claiming for independence as a Right to Protection measure through non-violent avenues, is depicted as ‘extremism’ by the ‘counterinsurgency’ mouthpieces, just as the armed struggle was painted as ‘terrorism’. But, architecting, executing and continuing the theoretical facilitations of the genocide, passing the blame on ‘stars’ when the outcome is haunting, never accepting the genocide and righteous solutions by citing ‘lack of appetite’, but audaciously continuing the deception by harping on ‘engagement’ with the gullible among the affected, pass as ‘international diplomacy’ with immunity. 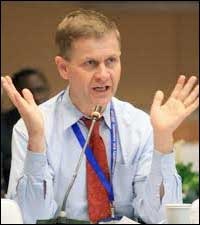 The attack on TamilNet as an ‘extremist’ media of Tamils, initiated last week by Norway’s failed ‘peace facilitator’ and current OECD ‘development’ provider, Mr Erik Solheim, is not an accident transpiring from a casual twitter discourse.

In the past such attacks were orchestrated to pre-empt vigilance, mobilisation and opposition, whenever the actors were ready with a deceptive move ‘up in their sleeves’ that would imperceptibly but internationally authorise and facilitate the structural genocide of the nation of Eezham Tamils.

Sharp observers in the diaspora could figure out the authors, followers, intent and the context of such orchestrations in the past, and also the ‘quality’ of the orchestrations.

This year’s orchestration, initiated by Mr Erik Solheim, is timed for the impending March UNHRC deception. And some of the second fiddles in the diaspora have already started writing to Tamil readers that TamilNet is an agent of China, at which the mandarins of Beijing may laugh through their back.

Tamil academic Guruparan Kumaravadivel in his latest article has aptly brought out how an utterly useless debate between Colombo and the TNA on the 13A will be kept prolonged for years in the island, by those who have a vested interest, to deliberately ‘lose’ a genuine political solution.

Orchestrations are engineered in the diaspora by the same forces of vested interests to prolong the diaspora idling with a matching debate, so that the agenda of structural genocide will be fulfilled smoothly in the meantime.

Those who could see how the Norway-initiated peace facilitation became a preparation to annihilate an otherwise-impossible-to-defeat nationalist armed struggle through the genocidal onslaught, could also see how the current deliberations by the same actors aim at the completion of structural genocide and irreversible annihilation of the nation and territoriality of Eezham Tamils.

This is the ‘lasting’ solution conceived by the current actors in making inroads into the island ‘as a whole’.

When the capacity, calibre and imagination of their minds as well as ‘appetite’ are stuck at that point, and when the people whose existence is threatened by their bulldozing callousness expose it, oppose it, argue for alternative paradigm or speak in favour of mobilisation for edification, then it is branded as ‘extremism’.

Reproduced below is the transcript of a twitter discourse initiated by Mr Erik Solheim in which TamilNet ‘extremism’ figures prominently. Further comments on the contents are not needed as regular TamilNet readers could find the truth.