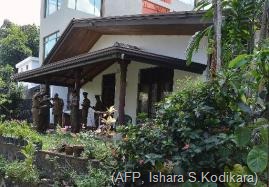 Former Agence France-Presse journalist Mel Gunasekera was stabbed to death on Sunday after a break-in at her family’s home in the Sri Lankan capital Colombo, police said.

The body of Gunasekera, who had been working for the international ratings agency Fitch, was discovered by her parents at their house in the Battaramulla neighbourhood after they returned from church, police spokesman Ajith Rohana said.

Police have arrested a man in connection with the murder, Rohana said, adding that he had been in possession of Gunasekera’s stolen mobile phone.

The spokesman said that police believe the suspect murdered Gunasekera after she recognised him as a labourer who had been hired over a month ago to paint her house.

"At that stage, he had used a knife from the house to attack and kill her," Rohana told reporters.

He added that police had taken fingerprints and had studied closed-circuit television footage.

Gunasekera, 40, was an assistant vice president at Fitch’s Sri Lankan operation, a position she took up in 2012 after a five-year stint as Colombo correspondent for AFP.

As well as reporting extensively on financial and political affairs in Sri Lanka, she also made several visits as a journalist to the neighbouring Maldives.