According to the Catholic Bishop of Jaffna, the US Asst Secretary of State, Nisha Desai Biswal, visiting Jaffna on Saturday, was harping on ‘reconciliation’ in response to his request for a credible investigation on the conduct of the war. ‘Reconciliation’ is a paradigm set by the US State Department immediately after the genocidal war to facilitate continued genocide and structural genocide of the nation of Eezham Tamils. The events of the last five years have proved it beyond any doubt that ‘reconciliation’ is a camouflage for genocide. What is needed urgently is an international arrangement to protect the nation and territoriality of Eezham Tamils from the on-going genocide, commented Tamil activists for alternative politics in the island. 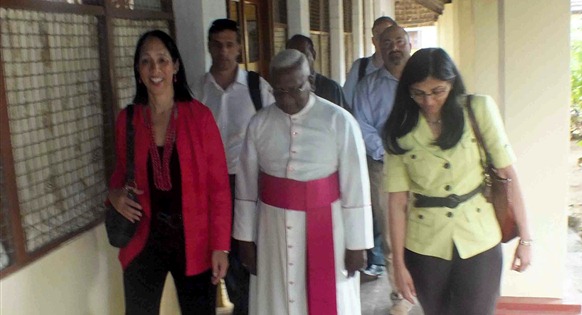 US Ambassador in Colombo Ms Sison, Jaffna Bishop and the visiting US diplomat

While the Northern Provincial Council (NPC) passed a resolution this week demanding independent international investigation on situation ‘equivalent to genocide,’ the visiting US Assistant Secretary of State for South and Central Asian Affairs Nisha Desai Biswal, the successor to Robert Blake, was advocating for a ‘reconciliation’ approach instead of international investigations, informed sources in Jaffna told TamilNet.

The Catholic Bishop of Jaffna Rt. Rev. Dr. Thomas Savundranayagam also confirmed this to the press in Jaffna after his meeting with the visiting US diplomat.

The Bishop was of opinion that an independent investigation, acceptable to the people was a must to establish the truth on the conduct of war. “Only then, we can establish what happened to those missing and where they were taken to,” he said as telling the delegation.

If such investigation is not possible to be conducted here, then it could be held outside [the island]. This is what the people want, the Bishop said.

“They [the US delegation] were asking us again and again whether we were not concerned of working for a reconciliation approach between the ethnic groups here. Of course, we were concerned of forging unity in a multi-cultural and multi-religious context, I told her”.

“They [the US delegation] believe peace is only possible on a such foundation,” the Bishop said referring to US diplomat’s position on taking a reconciliation approach.

“After she concluded explaining her stand, we explained also about the hurdles in the said approach. I explained that there is no genuine thinking on the part of the government about a sincere approach to reconciliation or to peace building. The government finds itself as a victor bragging that it had managed to crush the Liberation Tigers and other hurdles that it had faced.”

“Finally, she asked us on what we were having in mind as to be emphasized at the UN Human Rights Council session this time. I wanted to emphasize the plight of our people on the missing persons.

“All of them are saying that their sons, daughters and others were taken in front of their eyes. But, they were not brought back. What happened to those missing, the people are asking. The government should give a proper response to this,” the Bishop said as telling the visiting US delegation.

Ms Biswal also met NPC councillor Ananthy Sasitharan, leaving an impression on her that the USA would be tabling a stronger resolution this time in Geneva. The US delegation was promising action on taking up the concerns of the missing people, Ms Ananthy told media.

Ananthy was briefing the visiting diplomat on the genocide committed and being committed on Eezham Tamils, participants of the meeting said.

After the meeting with Ms Ananthy, the US delegation also met the civil society in Jaffna. The civil society was firm in stressing that the Sri Lankan State is engaged in a protracted genocide against Eezham Tamils in the form of structural genocide, news sources in Jaffna said.

However, the visiting US team did not respond to the pleas against genocide, but was harping only on ‘reconciliation’, the news sources further said.

Ms Biswal was taken to an undisclosed locality in Jaffna to meet with the survivors of the genocidal onslaught on Vanni. The survivors explained how people were slain by the Sri Lankan military. Many families had no survivors remaining to record their losses, the survivors told the delegation.

The visiting US delegation also met the SL colonial governor of North, Major General (retd.) G.A. Chandrasiri at his secretariat.

Ms Biswal was visiting Jaffna after having closed-door talks with Sri Lankan Foreign Minister G.L.Peiris on Friday and meeting the opposition leaders.

She is scheduled to leave for London to discuss the US resolution with the British Establishment, informed sources say.