Following the recommendations of the Internal Review Panel (IRP) on ‘United Nations Action in Sri Lanka’ brought out in November 2012 by the panel led by Charles Petrie, the United Nations has come up with a follow-up initiative in December 2013. The latest report, flagged as ‘Rights Up Front’ initiative, has also failed to focus on delivering remedial justice to the nation of Eezham Tamils, who have now become the abandoned victims exposed to Sri Lanka’s accelerated onslaught of structural genocide, said the activists of May 17 Movement, that staged protests at five cities, both outside and inside India, on February 12. Endorsing the May 17 Movement’s approach, 23 influential parties, groups and movements from India demanded two key remedial approaches: UN referendum on Tamil Eelam and International Investigations on War Crimes, Crimes Against Humanity and Genocide. 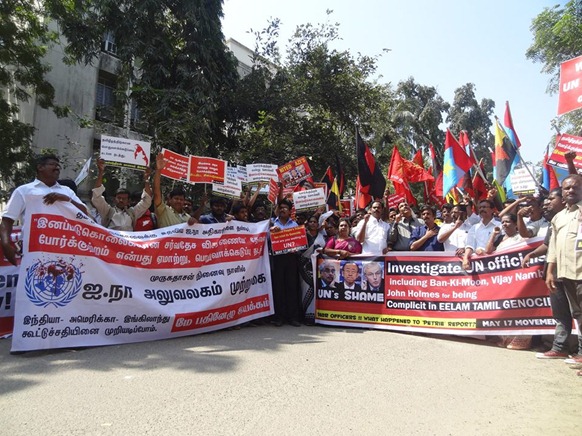 At Chennai, more than 20 political organisations joined the protest with slogans demanding referendum for Eelam and international investigation for the crime of genocide. Around 200 protesters were taken into police custody when they tried to siege the UNICEF office.

“Accountability is not just punishing the perpetrators, but also a process of reparation for the victims based on their political needs and aspirations with broader citizen participation,” said the statement endorsed with signatures by the leaders of the 23 groups that joined May 17 Movement in staging protests both inside and outside of India, on 12 February.

The protests took place at New York and Sydney and at the Indian capital of New Delhi as well as the state capitals of Maharastra, Karnataka and Tamil Nadu states.

Welcoming the timely initiative by the May 17 Movement, Tamil activists for alternative politics in the island said that the Tamil diaspora activist groups should start addressing the ultimate culprits, as an effective means to put a stop to the structural annihilation of the nation of Eezham Tamils.

The way forward to achieve this is waging a relentless global struggle targeting the responsibility of grave failures by the so-called ‘Co-Chair countries’ and India with the demand of remedial justice.

The remedial justice should be delivered by putting an immediate end to the ongoing structural genocide and by holding a referendum among Eezham Tamils on the question of Tamil Eelam.

The demands and slogans for the struggle have been clearly evolved. But, not the stage and the means, the activists further said pointing at the crucial responsibility of the Tamil diaspora.

The activists in the island further urged Tamil journalists to debate the significance of the two-pronged approach: addressing the ultimate culprits through targeting the complicity of the global/regional powers (the so-called Tokyo Co-Chair States UK, USA, EU, Japan and Norway in addition to India) on one hand and addressing the United Nations system on the other hand to take a positive path as a true institution of humanity.

By opening up public debate on the subject, the masses and solidarity activists across the world would be empowered to take up struggle to the next level, where it will be an international struggle against injustices caused by geopolitics of powers and against the system failure of the global body of humanity.

The memorandum, submitted to UN was endorsed by the following political organisations:

In the light of the “Petrie Reports” revelations and shedding light on the dark areas, which it chose to remain silent, UN top officials including Secretary General Ban-ki-moon, Vijay Nambiar, John Holmes, Rechoro Takachi, stand accused of being complicit with Genocide. We would like to emphasize that these top brass is not exempt of accountability.

Post Rwandan Genocide, lot of new procedures were laid down by UN to prevent another genocide being happened. But another genocide, most horrendous, has happened in this century in an island in the Indian Ocean. Will it be suffificient, if UN again restructures, without offering remedy to victims, Eelam Tamils? An institution which was carved out by tall leaders like Hammarskjöld is losing faith among the common public.

Witnessing the inaction of UN, the Permanent People’s Tribunal convened at Germany in December 2013, gave verdict that 1. Sri Lankan State is guilty of crime of Genocide, 2. Genocide is ongoing and 3. States of India, US & UK are complicit of Genecide. After this verdict, it is high time that UN takes strong and credible actions to punish the perpetrators and offer remedial justice to victims.

Accountability is not just punishing the perpetrators, but also a process of reparation for the victims based on their political needs and aspirations with broader citizen participation.

The UN should initiate an independent international investigation on Sri Lanka for its explicit in perpetrating crimes against humanity and genocide besides a transparent inquiry over charges of eliding accountability by the above mentioned individuals. It should also initiate the procedures to conduct an independence referendum for Eelam. Unless and otherwise the UN moves in such a direction it will be condemned to have failed as the global organization of the peoples and be designated as a stooge of the oppressive states.

We would like to drive the point that unless UN dares to initiate steps towards such a positive direction, the struggle against UN as a corrupt institution will intensify and this campaign is only a beginning. The protest against UN on February 12, we would like to remind, was the day our martyr Comrade Murugadasan self-immolated himself in 2009 in front of the UN premise demanding justice. This day will be day of symbolic representation of protest against the unethical, dishonest conduct of UN against which the oppressed people world over will rally.

This symbolic siege on 12/02/2014 against UN will take place in Chennai, Bangalore, Mumbai, New Delhi in India and in front of the UN premises in Norway, Australia, France, UK and New York, which we hope will be extended to other nooks and corners of the globe in the coming years. We would like to inform that the protest is not limited to the Tamils and sections from various nationalities as Kannada, Martha, Punjab, and Bengal have extended their greetings and participate in organizing struggles at their locations. Writers, poets, musicians, intellectuals, physically challenged advocacy groups, academics, advocates, media persons, dramatists, human rights activists and individuals and groups from various other professions have expressed their solidarity and participation with us.

PDF: Full text of the memorandum submitted by the 23 political organisations in India to the UN 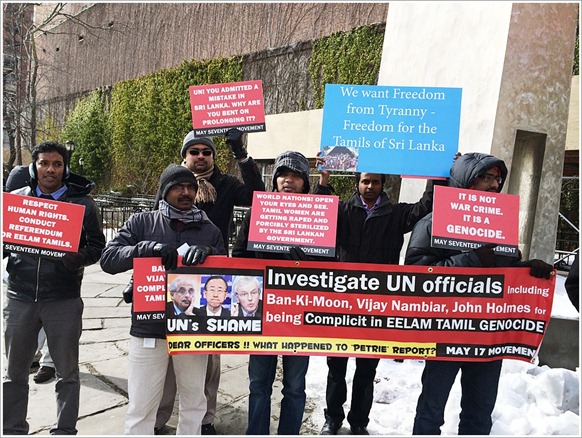