The Tamil Youth Organizations (TYOs) of 12 countries and four Tamil Nadu youth organizations that were active participants in the student uprising of 2013 in a joint statement released on Sunday endorsed the Tamil Sovereignty Cognition declaration. In addition to the TSC declaration, which recognizes the historical, earned and remedial sovereignties of the Eezham Tamil nation, the youth organizations also passed a declaration of principles, calling on the new generation of leaders from Tamil Eelam, Tamil Nadu and the Diaspora to “challenge the international community to re-evaluate its approach to self-determination for unrecognized nations and peoples and to build solidarity with other nations living under occupation to challenge the present geopolitical order.”

The statements were passed and read out at the Tamil Sovereignty conference conducted in London on Sunday by the TYO-UK.

At the conference, TYO-UK activists outlined the history and the basis of the Eezham Tamils’ struggle for freedom, connecting historical and earned sovereignty. They also explained how Eezham Tamils as a nation are eligible for the right to remedial sovereignty, criticizing the failure of the international community’s responsibility to protect.

Speaking to TamilNet, Tiksi Bala from the TYO-UK said “We have a historical sovereignty to our land that cannot be erased. We earned sovereignty through the creation of the de facto state. Now that there is no force on the ground, remedial sovereignty is the only solution to bring peace to the 60 year struggle and bring a stop to the ongoing genocide against Tamils by the Sri Lankan state.” 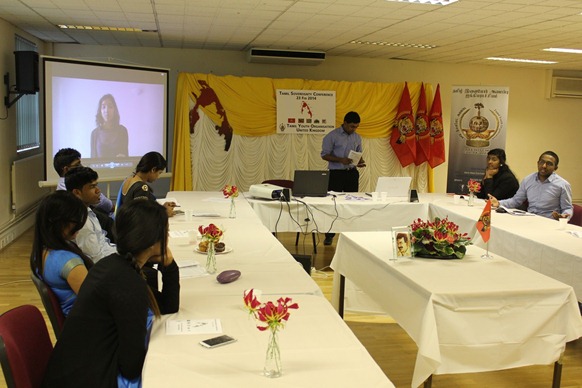 The full text of the Tamil Sovereignty Conference declaration of principles follows:

BE IT RESOLVED THAT on this day the representatives of the collective Eelam Tamil youth organisations around the world and Tamil youth movements in Tamil Nadu adopted the following declaration as guiding principles in the Eelam Tamils’ national question.

The principles are as follows: