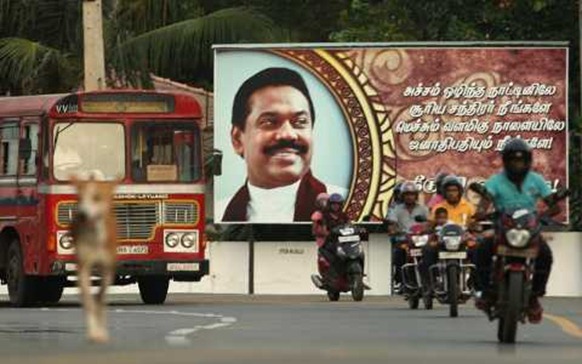 Along the major roads of northern Sri Lanka, the signs of 26 years of war between the mostly Hindu Tamil separatists and the Sinhalese Buddhist-dominated government are slowly being erased.

Once-bombed-out roads have been resurfaced, and workers are laying down tracks for a train line that was rendered dormant for decades by war. Mine clearers move through the tall grass lining roads, searching for unexploded ordnance. The beaming face of President Mahinda Rajapaksa is plastered everywhere, and banners hanging from destroyed buildings promise, “Never again.”

The plaques at victory monuments erected by the military here and frequent government statements declare that these are signs of reconciliation and progress, but many would disagree.

“Their vision for controlling the north really, sadly, seems to me, is not reconciliation, but it’s occupation,” said Fred Carver, director of the Sri Lanka Campaign for Peace and Justice.

Five years after the end of the civil war, berms, razor wire, bunkers and newly installed Buddhist shrines mark the ubiquitous army bases in towns large and small throughout the Tamil-majority north.

The soldiers are uniformly Sinhalese, and most do not speak any Tamil. In private, they are often referred to as an occupation force.

From 1983 to 2009, the Sri Lankan government was locked in a civil war with the Liberation Tigers of Tamil Eelam, commonly referred to as the Tamil Tigers or the LTTE. The Tigers were fighting to establish a separate state for the country’s Tamil minority, a group that makes up about 10 percent of Sri Lanka’s 20 million citizens. 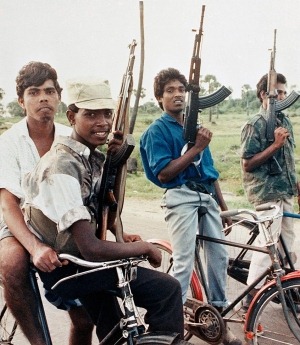 On this Indian Ocean island, the Tamil ethnic group has long been discriminated against, both through government policies and through informal means.

The Tigers’ tactics were ruthless and effective. Over the years, they launched punishing attacks against the Sri Lankan government from land, sea and even air. At their height, they captured a third of the island and administered their territory as if it were a sovereign state. But the group also showed little reluctance to attack civilian targets, placing bombs in buses, markets and train stations. Assassination campaigns claimed the lives of dozens of politicians. The militants also assassinated Tamil rivals and at times forcibly conscripted children and adults to join their fight.

At the end of a war characterized by its chronic stalemates, the Tigers’ end came unexpectedly quickly. In early 2009, the Sri Lankan government launched an offensive that swiftly wrested control of Kilinochchi, the Tigers’ capital. Within months, the Tigers were confined, along with tens of thousands of civilians, to a tiny spit of land on the Bay of Bengal. A final government push ended the war in May 2009.

The offensive was militarily stunning, but the collateral damage was high: In the final stage of the war, the United Nations has said, up to 40,000 civilians were killed.

This month, the United States sponsored a resolution at the United Nations Human Rights Council meeting in Geneva calling for an international investigation into alleged war crimes and human rights violations carried out by the Sri Lankan government at the end of the war. It has been accused of shelling civilians in areas that it marked as safe no-fire zones and of summarily executing surrendered fighters.

The international push to investigate alleged war crimes has increased scrutiny over the wartime and postwar human rights record of the Rajapaksa regime.

In the years after the war, there has been little room for dissent, with critics of the government continuing to disappear or turn up dead. Parliament granted Rajapaksa the right to run for an unlimited number of terms, as even the president’s base grumbles about the corruption of Sri Lanka’s ruling family.

A February Amnesty International report slammed the “climate of impunity” propagated by the Sri Lankan government in the years since the war’s end, writing, “Five years on, healing and justice are still remote goals.”

The government continues to hostilely reject any allegations of war crimes, human rights violations and even narratives that do not precisely fit with its war-on-terrorism account of the conflict.

There is “a basic denial that there really is any ethnic conflict or ethnic problem or problem of how power is shared between different communities,” said Alan Keenan, the International Crisis Group’s Sri Lanka program director. “And if you deny that problem and instead present the 30 years of war as merely a problem of terrorism from one side that was defeated by a legitimate government on the other, then you are really not going to get to the heart of the problem.”

In the final days of the war, Elilan, the Tamil Tiger political leader of the Trincomalee district, was trapped in the tiny tract where the militants met their end. Running out of options, he considered swallowing the cyanide capsule all Tigers carried around their necks in case all hope was lost. But then his wife called.

“I pleaded and forced him to surrender,” said Ananthi Sasitharan, his wife. “For my sake and the sake of our children, he surrendered and did not commit suicide.”

Along with some other senior Tigers, Elilan surrendered to the army on May 18, 2009, but was never heard from again. Sasitharan believes that he either is being secretly held in government detention or was executed.

“I forced him to surrender,” she said, tears rolling down her face on a recent humid morning in Jaffna, Sri Lanka’s largest Tamil-majority town. “I feel morally responsible to fight for his release or for the punishment of the officers who killed him.”

After the war, Sasitharan emerged as one of the loudest local voices calling for investigations into the cases of people who disappeared both before and after the war’s end. Last year she used her popularity to win a seat on the Northern Provincial Council, a legislative body for the northern part of the country.

Sasitharan’s position has made her an enemy of the government and its supporters.

Last September, during her election campaign, she said, her home came under attack by government supporters who she says were bent on killing her.

After the war’s end, more than 10,000 former militants were sent to government rehabilitation programs. Officially, the programs were meant to reintegrate fighters back into society and teach them life skills. But there have been many allegations that the programs were extended detentions at best and centers for torture at worst.

A fighter until the end

Unlike most former Tigers, who are Hindu, George and his wife are Catholics, with large pictures of Jesus Christ adorning their home, tucked among palm trees and rice fields in Sri Lanka’s northwest.

George is in his early 40s and gave off a nervous, uneasy smile when he talked about watching people cut down by shelling, his years of imprisonment and how his shrapnel-scarred 5-year-old daughter now runs inside when she hears airplanes.

He remains unapologetic about his role in the conflict.

“I remained a fighter until the end of the war, and I am very proud to say that I fought until the end,” he said.

Like other former Tigers I spoke with, George requested anonymity for fear of government reprisals.

At the end of the war, he was trapped in the final no-fire zone, a tiny tract on the northeastern coast. As Tiger ranks began to disintegrate, he caught a glimpse of his wife and infant daughter moving toward government lines and decided to surrender. He tossed his rifle and uniform into the body-filled shallow lagoon separating the spit of sand from the mainland and joined his family. But he was quickly taken away by the government.

For the next two years, George said, he was held in government detention, moved from one jail to another, often not knowing where he was. At times, he said, he was handcuffed to the bars of his cell, unable to move.

A relative overseas funneled money to launch a court case in his defense, which eventually got him released, though the way George told the story, it sounded more like payoffs.

After his release in 2011, George found it difficult to hold down jobs. Employers are hesitant to hire ex-fighters, fearful that they will bring unwanted attention from the government.

He is not optimistic that the situation for Tamils in the former conflict zone is going to get better.

“With this government, there is never going to be any solution. Our people’s fate is sealed,” said George. “After the war, they did not win the hearts of the people or do anything toward a settlement. They only militarized the area and put a Buddhist statue in every village.

“In history, we see that any ethnic people, when they are pushed to the verge, they always burst,” he said.

George’s sentiments are not uncommon in the north.

Selvi, a 35-year-old woman who was recruited by the Tigers as a teenager, served as a medic for the group. She received weapons training, she said, but she never took part in combat.

The price she paid as a member of the organization was heavy. During her service, she was shot through the shoulder by a sniper as she tried to treat people wounded by an artillery barrage. Toward the end of the war, her sister was forcibly recruited and later died in combat. Selvi assumes her husband, who worked in the Tigers’ political wing, was killed by shelling in the last weeks of the war.

Despite the anguish her association with the Tigers brought her, she continues to believe it was the right path.

“I still feel that the struggle of the LTTE is worthwhile. It was meaningful to me with all the sacrifices I have made,” she said.