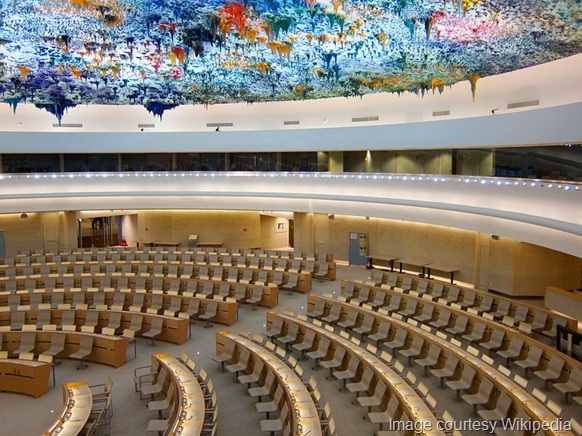 “The passage of the resolution marks a historic moment…”

Having lost the crucial vote in Geneva and opened the door to an international investigation, Sri Lanka is now in new territory. Sri Lankans saw who their real friends were at the UNHRC on Thursday night. Our friends, Pakistan, Cuba, China, Russia — and in a welcome turn around, India, which opposed the intrusive mechanism of an OHCHR led investigation and abstained— did far better for Sri Lanka than the Government of Sri Lanka did for itself and the country. The performance of our friends was infinitely superior to that of our own. Ambassador Zamir Akram of Pakistan (my old comrade-in-arms from the conspicuously successful May 2009 battle in the same arena) made the speech, and argued the case, that the Sri Lankan side should have but didn’t. Not all the King’s horses and men (and gold) could secure a single vote more for Sri Lanka than the unimpressive 12 it obtained last year. In fact Sri Lanka got one vote less than estimated by the Global Tamil Forum ( or was it the British Tamil Forum— they all sound alike to me) in its on the record estimate of the UNHRC vote some weeks ago.

It is not so much that the USA won this vote on the resolution against Sri Lanka, but that Sri Lanka lost, since it was unable to convince those who abstained — which included those who stood with us in 2009— to vote get off the fence and vote with us.

Sri Lanka is in a box in Geneva. It cannot and must not agree to an international inquiry, but the rejection of it will entail an escalating price. An AFP report confirms the trap that is being set for Sri Lanka’s political and military leadership, with a view to legal decapitation:

No democratically elected government can or should submit this country’s tormented contemporary history and its armed forces to an international inquiry. No party that hopes to be elected to office can be suspected of agreeing to such submission. If the UNP pussyfoots on the UNHRC resolution, it will remain in limbo and possibly go into oblivion through decomposition of its voter base. What any elected government — and that includes a future government of the UNP or the JVP— can and should do is to sincerely implement the LLRC recommendations, including its recommendation for an independent inquiry into a list of identified incidents.

The most striking single development at the UNHRC in Geneva was the fact that the West didn’t mind riding roughshod over India’s principled objections to the unprecedentedly intrusive role accorded in this resolution to the Office of the High Commissioner. This meant that the West was not willing to defer to Delhi’s perceptions in a matter that concerns Delhi, namely the post war process in Sri Lanka and the negative consequences of the resolution’s intrusive aspect. The Anglo-American axis was not willing to concede India’s leading role in a matter in her own neighbourhood. No good ever comes from an extra-regional initiative that vaults over rather than works with the regional power and the clear consensus in the neighbourhood (South Asia, and almost all of Asia, was decidedly opposed to an OHCHR investigation).

The second most noteworthy factor is that the TNA issued a statement welcoming the vote and the international investigation. It did so despite India’s abstention, following its criticisms of the international investigation aspect of the resolution and warnings about the deleterious effect on post-war reconciliation. This makes clear that the TNA marches to a Western Tamil Diaspora drum and perhaps a Western drum, much more than to Delhi’s.

Why did the US-UK overstep the consensus with its strategic partner India? Why did it not defer to Delhi’s perceptions in a matter concerning India’s interests and role? What were the considerations and compulsions driving Western policy that were felt to be more important? Exactly who and what are behind the Geneva resolution? What is the next step the main sponsors have in mind? All this is no longer a matter of guesswork because it is in the public domain. The report of the March 25th 2014 debate on Sri Lanka in the UK House of Commons quotes Hugo Swire, Britain’s Minister of State for Foreign and Commonwealth Affairs as stating that: “We are determined to win the council vote, which will take place later this week. The UK has taken a forward-leaning position and provided leadership, and will help break new ground if the council is successful in establishing an international mechanism.”

So it is the UK rather than the US that has taken “a forward leaning position” i.e. been in the vanguard, and “provided leadership”, leveraging its special relationship with Washington. This is exactly what happened in 2009, when as the Wikileaks cables prove, it was David Miliband who successfully lobbied Hillary Clinton. For the British, this is unfinished colonial business— over-compensating for failing to do to Ceylon/Sri Lanka what British colonialism did to India on the way out, and opening the door for the possible ‘rectification’ of that ‘error’.

Swire also admits that the international inquiry into Sri Lanka will be a precedent in the international system: “will help break new ground if the council is successful in establishing an international mechanism”. It is precisely this aspect that was part of the battle of norms in the UN that a British scholar produced an essay on, observing ruefully that during the last war, it was Sri Lanka that won this battle, especially in Geneva.

“Many of the battles over conflict-related norms between Sri Lanka and Europe took place in UN institutions, primarily the Human Rights Council (HRC)…it was Sri Lanka which generally had the best of these diplomatic battles…In fact, Sri Lankan diplomats have been active norm entrepreneurs in their own right, making significant efforts to develop alternative norms of conflict management, linking for example Chechnya and Sri Lanka in a discourse of statecentric peace enforcement. They have played a leading role in UN forums such as the UN HRC, where Sri Lankan delegates have helped ensure that the HRC has become an arena, not so much for the promotion of the liberal norms around which it was designed, but as a space in which such norms are contested, rejected or adapted in unexpected ways…As a member of the UN HRC Sri Lanka has played an important role in asserting new, adapted norms opposing both secession and autonomy as possible elements in peacebuilding – trends that are convergent with views expressed by China, Russia and India…The Sri Lankan conflict may be seen as the beginning of a new international consensus about conflict management, in which sovereignty and non-interference norms are reasserted, backed not only by Russia and China but also by democratic states such as Brazil”. (David Lewis, ‘The failure of a liberal peace: Sri Lanka’s counterinsurgency in global perspective’, Conflict, Security & Development, 2010, Vol 10:5, pp 647-671)

It is the “new ground” that Hugo Swire hoped to break, i.e. the dangerous deviation from international norms, that Sri Lanka should have focused on and convinced or neutralised a majority of the Council, but it failed to do so because its stance and strategy was not one of reasoned if sharp argumentation (the mode of Sri Lanka in Geneva in 2007-2009) but of dogmatic denial fused with arrogantly aggressive assertion, echoing the discourse of the regime’s most hawkish personality.

What is it then that the US wants? I do not believe it is a military base, because that would be readily handed over by the most militarist element of the power elite, if it gets the regime off the war crimes hook. Surely there is no grand geostrategic factor that could have changed between March 3rd when the US presented a relatively balanced draft resolution that was acceptable to India, and a fortnight later when the US-UK resolution hardened to the point that it was unacceptable to India? US foreign policy is not formulated according to a crudely uni-dimensional militaristic determinism nor can it be comprehended by a geopolitical reductionism. The minimum that the US needs to ease off on Sri Lanka is beyond the maximum the regime is willing to concede, not on military facilities, but precisely on Tamil rights and autonomy, attacks on evangelical Christians (a powerful lobby in the US), and governance and democratic norms in general. The best chance for Sri Lanka to get off the US hook was when the Kerry-Lugar report (of the powerful US Senate Foreign Relations Committee) of late 2009 expressed its willingness for a re-set, with the trade-off being that accountability could be put on the back-burner in return for real progress on political reconciliation with the Tamils, in the form of provincial devolution. Milinda Moragoda was responsible for opening that window, but the Sri Lankan government failed to respond constructively.

I believe that the minimum program of the USA is the same as that of India — containment of Sinhala militarist domination, a greater degree of equilibrium between the Sinhala and Tamils, and rendering regime behaviour more compliant with Western liberal democratic norms of governance. However, US policy seems to have more ambitious aims. Washington knows that its domestic ally, the pro-Western opposition (Ranil and/or CBK) cannot defeat Mahinda Rajapaksa electorally, and therefore, regime change and the re-shaping of the post-war Lankan order must be effected by recourse to external means— initially, international institutions and law, as well as external economic pressure.

The citizenry of Sri Lanka are trapped in a pincer, between the callous lies of the government and the hypocritical, aggressive arrogance of the West. What then is to be done?

Once the sharp contest at the provincial elections is over, Government and opposition should vote on a joint resolution in parliament which rejects any international inquiry, including one led by the Office of the High Commissioner, even if it has been endorsed by a majority of members of the UNHRC.

The way for this or any successor administration to roll back the resolution is to address positively and constructively, everything in it, except for the intrusive inquiry which must be rejected. Remove the planks of the platform by implementation of all the other points raised by both the Resolution and the High Commissioner’s Report, and the external inquiry can be isolated and neutralised.

As a country we have to hold on, hang tough. The speeches on High Commissioner Navi Pillay’s introductory remarks on Sri Lanka at the UNHRC on Wednesday March 26th 2014 showed us the faces of Sri Lanka’s true friends, whom we must never forget for generations to come: Russia, China, Cuba, Pakistan, Venezuela, Vietnam, Namibia, Algeria, Myanmar, Bangladesh, Uzbekistan, et al. Hanging tough is not enough, though. We must be smart, and that sometimes means taking one step back so as to take two forward at the right time. There is a difference between capitulation and compromise.

Sri Lanka must hold out until our society and polity are capable of incubating, of gestating a collective Deng Hsiao Peng— a Realist reformist option, which will shift tack, manoeuvre and balance, get us out of this trap.

(Dr. Dayan Jayatilleka was Sri Lanka’s Ambassador/Permanent Representative to the UN in Geneva in 2007-2009, including the Special Session of May 2009.)