The commander of the genocidal Sri Lankan military in the Jaffna peninsula, Maj. Gen. Udaya Perera, who was trained and awarded in the US Army War College in 2012, after his role as director of SL Army operations in the genocidal onslaught in 2009 followed by counter-insurgency foreign service targeting Tamil diaspora from Malaysia, is deploying new tactics for furthering the structural genocide against Eezham Tamils in his position as the commander of SL military occupying the peninsula. The SL commander has launched a deceptive programme to woo Tamil youth into subservient jobs to SL military by promising good payment through a secret agent known as ‘Tamil CNN Kannan’ who has come from the UK. As the direct campaign to enlist Tamils into the genocidal military has failed, the SL military has chosen to trap Tamil youth through business and media agents. 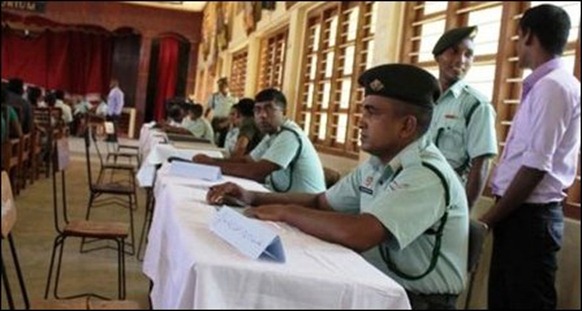 Why the TNAs Northern Provincial Council has failed in alerting the Tamil public in advance is a question asked by several public sources in Jaffna. Had the NPC alerted the public, many of the youth would have saved from the deceptions of the occupying SL military designs, the sources further said.

In reality, there is no outfit known as Reconciliation Centre, but an operative scheming anti-social and destructive businesses. Known as ‘TamilCNN Kannan’, the operative, who has come from UK, is managing the deceptive move of recruitment, through a local operative known as Yathavan Somasundaram (Selva), a science graduate, who is from Maalusanthi in Karaveddi.

The fake offer of employment is designed (see the leaflet in Tamil) without any mention to the SL military.

The invitation is being sent through village (GS) officers. When those appearing for the interview see the SL military officers at the interviewing seats, it is too late to escape.

The Sinhala military officers are particular in collecting the original certificates from the youth for enlisting them through intimidation. The youth being recruited will be trained at Palaali military base for 3 months and assigned to various camps in the peninsula, informed sources told TamilNet.

Kannan, who is originally from Irumpu-mathavadi of Karaveddi in Vadmaraadchi, was earlier operating a website in Tamil language known as TamilCNN from the UK. The website has been reportedly sold to someone else in the diaspora, who is also close to the military establishment in Colombo.

Udaya Perera has appropriated another Tamil website, known as New Jaffna, which has been popular for gossip stories as well as local news from Jaffna in Tamil.

The ‘transformation’ was done through intimidation in the beginning, later deception, and finally through brokering several lakhs of money. The SL military Establishment chose to spend money to get the domain of the site transferred from a diaspora person involved in the operation.

The SL military intelligence seems to believe that it could design an effective disinformation campaign through Tamil language websites that have already gained some traffic.

The SL military intelligence has also tried to deceive the public through a print media operation called Tamil Naatham, deploying intelligence operatives as journalists. But, the move didn’t work as nobody bought that paper.

During the provincial council election, the SL military intelligence published a fake newspaper resembling the popular daily Uthayan. The paper came with a false message that Ms Ananthy Sasitharan had joined the UPFA. Although the people of Jaffna identified the paper as a fake one, the SL military had managed to cause confusion among the voters.

Udaya Perera has also obtained the services of a Colombo-based businessman who owns popular Tamil newspapers published from Colombo, informed sources further said. The businessman has censored local media from publishing the news of military recruitment taking place in Jaffna.

As Tamils were informed through the print and the web media on the plight of the Tamil women who were recruited in Ki’linochchi, the recruitment drive was severely affected. The SL military was only able to deceive 49 Tamil women in Mullaiththeevu district.

When the SL military waged official recruitment meetings in Jaffna, there was no one prepared to join the ranks of the genocidal military. Learning from the experience, the SL commander shifted the tactic through his agents promising ‘government jobs’. 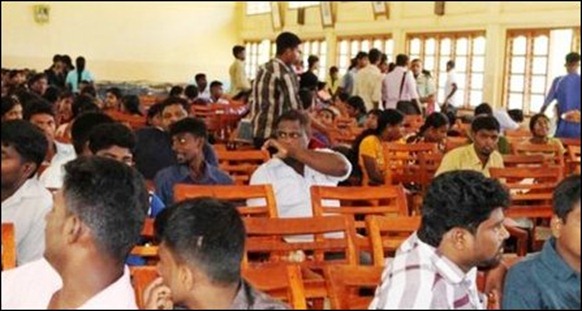 A section of Tamil youth deceived to attend an interview session held in Kokkuvil on Sunday.

Kannan, who hails from Irumpu-mathavadi of Karaveddi in Vadamaraadchi, was an exiled businessman. Gotabhaya Rajapaksa’s defence establishment, through Selvarasa Pathmanathan alias KP, wooed him to collaborate with the SL military establishment.

In return for his agent serveries, Kannan is given access to scooping sand from Vadamaraadchi East by the SL commander in Jaffna. The establishment is operating under the name ‘Neythal’.

According to informed media circles, Kannan is also trying to launch a newspaper in Jaffna to wage disinformation campaign on behalf of the SL military intelligence.

Divisional Secretariat officials in Point Pedro were struggling with the demand from Yathavan to provide license to serve alcohol at the locality, questioning the motive of the ‘massage centre’.

The team is also enjoying good rapport with foreign missions in Colombo. A mission of a European country is keen in entertaining the operative, who is involved in anti-social activities, concerned civil sources told TamilNet pointing out a particular embassy in Colombo. 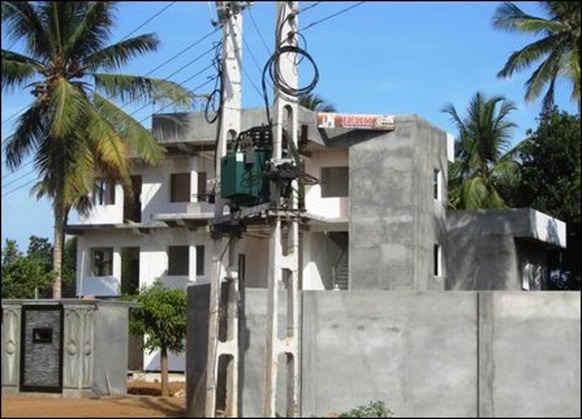 Udaya Perera’s ‘politico-military strategy’ is deceiving Tamil youth, especially Tamil women with jobs in order to conscript them and isolate the victims and their families from the mainstream Tamil society to form a collaborative section among the population.

In a paper produced to the US Army War College in 2012, Major General Udaya Perera argues that the failure of having a comprehensive counter-terrorism strategy on the part of the Sri Lankan State in 80s and 90s had allowed what he calls Tamil ‘insurgency’ to be transformed into ‘hybrid-terrorism’.

During the genocidal onslaught on Vanni, SL Defence Secretary and presidential sibling Gotabhaya Rajapaksa promoted Udaya Perera to Major General rank in early 2009 for his role in managing the genocidal war as a director of operations in the Sri Lanka Army.

Immediately after the end of war, Perera who has a military intelligence background was posted to Malaysia as a deputy high commissioner. After a two-year ‘successful‘ assignment in Malaysia, he was sent to US Army War College in 2011.

In 2012, immediately after the US Army War College awarded him, the genocidal commander was posted as the commander of Ki’lnochchi.

Launching a series of ‘counter’ measures to isolate Tamils from their social movement, Udaya Perera targeted to recruit Tamil women to disrupt the Tamil social formation. He devised a plan to divide and rule the Tamils in Vanni.

His tactics included a series of operations of transforming former LTTE members into subservient workers in the farms, exploiting the former LTTE female members and thereby isolating them from the mainstream Tamil society, allowing rape and social misconduct under the military rule to create divisions and military arranged ‘marriages’ between Tamil women and Sinhala soldiers, creating caste-divisions among Tamils and targeted conscription of Tamil women by exploiting the poverty-stricken situation of the Tamil families into Sri Lankan military amidst the opposition of the girls and their parents.

Unlike his ‘Gucci Peace Prize’ awarded predecessor Major General Hathurusinghe, Major General Udaya Perera would even appear in civil cloth if that is necessary to accomplish his counter-insurgency mission.

Udaya Perera is seen as an obedient and trusted commander by Gotabhaya Rajapaksa who has been deploying him at the ‘right place at the right time’, a military analyst who has survived the genocidal onslaught on Vanni told TamilNet.

Gotabhaya Rajapaksa, a US citizen who was having good rapport with Pentagon officials during the genocidal onslaught, was able to convince his siblings including the president and commander-in-chief Mahinda Rajapaksa on how to deal with the Western countries under the global paradigm of ‘war against Terror’, the Tamil analyst said.

“The US Defence Establishment regularly briefed the SL military decision makers, who had political authority to adopt a counter-insurgency approach with a central focus on Tamil diaspora,” the analyst further said.

“Such advice also involved which countries Colombo should be ‘exploiting’ for the logistical purposes in the genocidal onslaught. The LTTE was fully aware of it but didn’t do enough to educate the Tamil diaspora on the military affairs,” the analyst who recently fled the island said.

“Not only military advice and intelligence, but critical information vital for political manipulation on averting an international intervention, removal of NGOs, the projection of arguments on ‘human shields’, ‘humanitarian-operation’ and ‘zero casualty’ propaganda concept including the idea on announcing no-fire zones came from the military advisers in the West.”

Following are some of the extracts from Udaya Perera’s paper produced to the US Army War College in 2012:

“A close analysis of the conflict will expose the fact that the Sri Lankan government’s decision to use regional powers rather than the western powers was the most important and critical decision of the government that helped in achieving success.”

“The Sri Lanka-Pakistan bilateral relationship has been strong ever since Pakistan independence. Pakistan and China were main arms suppliers to Sri Lanka during the Sri Lankan crisis. China, another neighbour of India, fought a war against India in 1962 has been a very close ally of Sri Lanka. As a result, India felt threatened by Sri Lanka’s close relations between Pakistan and China.”

PDF: The paper produced to US Army War College by Major General Udaya Perera of the genocidal military

“In order to gain and maintain support in the campaign against the LTTE, Sri Lanka had to maintain a delicate balance in its foreign policy with all the nations in the region. While obtaining material support from Pakistan and China to defeat the LTTE, Sri Lanka was able to keep India on its side throughout the humanitarian military campaign. Indian support was vital in keeping the western powers influenced by the Tamil Diaspora from interfering in Sri Lankan affairs.”

“Through a strenuous process of shuttle diplomacy, Sri Lanka was able to keep India on its side throughout the crucial period of August 2006 through May 2009. Indian and Sri Lankan special emissaries went between the two countries extensively in order to prevent misunderstandings during the conflict. This Sri Lankan policy paved the way for Sri Lanka to continue military operations.”

“The US led war on terror was helpful in isolating the LTTE internationally due to the tough stance against terrorism. The intelligence sharing improved in the post 9/11 scenario and it was helpful in identifying and destroying LTTE ships in international waters by the Sri Lanka navy.”