The India map wears saffron this morning as Narendra Modi, a former RSS pracharak, leads the BJP to the strongest showing by a political party since 1984. (India Decides 2014: Track Live Results Here)

That year, the Congress had swept the general elections in a strong sympathy wave after the assassination of Prime Minister Indira Gandhi. The BJP, then a four-year-old party, had won two Lok Sabha seats.

Today, the party looks set to win 278 seats on its own, six more than the majority mark – which means that it could have formed government even without its pre-poll alliances. (Across Varanasi, Posters Congratulate Narendra Modi)

Together with its 11 allies in the National Democratic Alliance, it is set to win more than 330 seats, which will ensure that it needs no post-poll allies to help form a stable government.

At a little after noon, Mr Modi, 63, stepped out of his residence in Gujarat to seek his mother’s blessings after tweeting, "India has won! This is India’s victory. Good days will soon be here." (Armed With Massive Victory, Narendra Modi Meets His mother) 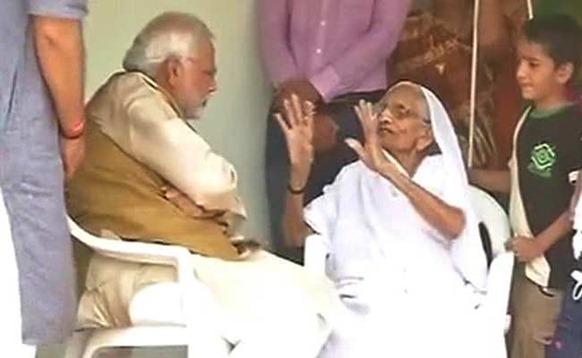 Veteran BJP leader LK Advani was one of the first to congratulate Narendra Modi for their party’s stupendous performance. Mr Advani had staged public sulks last year when Mr Modi was elevated first as the head of the BJP’s campaign and then as prime ministerial candidate. More recently he moved a no-confidence motion against Mr Modi by seeking to contest from Bhopal and not Gandhinagar in Gujarat, the latter’s turf.

One of the first key decisions Mr Modi has to take is what role Mr Advani will play in the new dispensation. The Rashtriya Swayamsevak Sangh or RSS, the party’s ideological mentor, has said it wants the senior leader to have a mentor-like role. Mr Advani has reportedly professed interest in being Speaker. (Advani Could be Speaker, Sushma Wants a Top-4 Ministry: BJP Sources)

With the kind of dominance he has won in Parliament today, Mr Modi is unlikely to have misgivings about giving Mr Advani the Speaker’s post.

He also has to decide on a role for Sushama Swaraj, another senior BJP leader who has had differences with him. Ms Swaraj has reportedly said that only one of the top four ministries – home, defence, finance and external affairs – is commensurate with her seniority. (BJP Initiates Moves to Decide Roles for Sushma Swaraj, LK Advani)

The BJP’s performance today is powered by a huge win in Uttar Pradesh, where it is set to win 62 of the state’s 80 seats. In 12 states the party looks good to win all the seats in a clean sweep – including Delhi where in 2009 it had not won any. (Election Results 2014: Early Trends Show BJP Ahead in 69 Seats in Uttar Pradesh)