The India of Gandhi, Nehru, Ambedkar, Periyar, Jayaprakash Narayan and the Sri Lanka of D.S. Senanayake, the Ponnambalams, Ramanathan and Arunachalam, G.G. Ponnambalam, of S.W.R.D. Bandaranaike, who, in courage and faith, signed the ill-fated Pact with S.J.V. Chelvanayagam only to be forced by hard-liners, to retract of, Philip Gunawardene, Colvin R de Silva, N.M. Perera and the Lanka Sama Samaja Party, would not have countenanced such tyranny.

We are living on a different planet now. 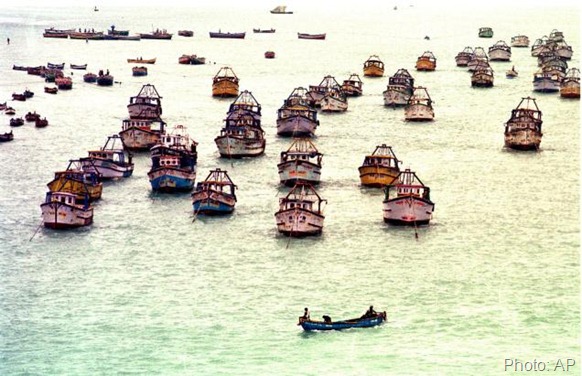 AP – NOT A CRIME: Fishing being one of the most instinct-driven livelihood avocations, we should devise a system where trespassing by fishermen becomes impossible by definition. Photo: AP

Five years after the war

The Liberation Tigers of Tamil Eelam’s macabre methodology choreographed its own destruction. The time comes now, five years after the war, to ask if in this, its fifth post-war year, Sri Lanka is at peace with itself. And to introspect on what has followed the end of ballistics. Peace with justice? Peace with trust?

The end of the war, unacceptably bloodied as it was, opened an opportunity for a new beginning, a great leap forward toward a millennial reconciliation. Is that taking place? In a situation that calls for reparation, it is the one who needs reparation that must report satisfaction, not the reparation-giver.

The insensitive thwarting of moderate Tamil Lankan leaders’ legitimate aspirations, decade after decade, by narrow ethno-linguistic nationalism, grew into the nightmare that ended five years ago. That vicious cycle must not be repeated.

South Africa’s Truth and Reconciliation Commission (TRC) has had and continues to have its critics, but its work rested on credibility and that came from two things: it was chaired by a man of the veracity of Bishop Desmond Tutu and, even more importantly, it was powered by the vision of Nelson Mandela, nowhere as well expressed than in his statement “I am against White racism”… “I am against White racism?” …What is the big deal in that? The whole world was against apartheid. But the ‘point’ came in the next sentence. “And I am against Black racism”… Now that was a Big Deal, a Very Big Deal indeed. That showed the difference between democracy and majoritarianism, between Justice and Victor’s Justice, between Trust and Fear.

The TRC could have done more, better, but others on the Reconciliation Route cannot do better than follow the TRC where intentions are concerned.

Thanks to the determined efforts of the late S. Thondaman and the démarches of High Commissioner Thomas Abraham in the period 1978 to 1982, and of those being followed up later, the plantation Tamils’ issue of statelessness is now over. But statelessness is one thing; a sense of belonging is another. There remains an unfinished agenda about these ‘Cinderella people,’ as Professor Suryanarayan describes them, namely, the agenda of post-integration habilitation in terms of education and careers beyond the plantations.

The edge of the verge

Within touching distance that we are, India, Sri Lanka, Pakistan, Bangladesh and the Maldives must do something pioneering about the effect of global warming on our coastlines. The rise of seawaters cannot be seen by us as a Maldivian imperative, a Bangladeshi criticality and then, for India, Sri Lanka and Pakistan, a theoretical possibility. We are all within the circle of danger.

The trouble is that we have political philosophers in our part of the world, of the Left and the Right, and political leaders, but we do not have ecological philosophers and ecological leaders. Amitav Ghosh’s amazing novel “The Hungry Tide,” foresaw the tsunami of 2004. It is the creative exception which tells us we need an Arthur C. Clarke to tell us in fictional-real terms what we face by way of our planet’s hidden moods.

Littoral South Asian Association for Regional Cooperation (SAARC) ought to have a foolproof blueprint for facing and the handling of natural disasters peculiar to the region. We need a joint coastal SAARC plan for ocean disaster management. That we do not have one is a wonder. Not to make one now would be a disaster in itself.

The stalled Cetukalvai Thittam or the Sethusamudram Project needs to be seen not just through the lenses of giant fishing corporates but through the fisherman’s ancient instincts that know those waters better than any giant conglomerate ever can.

We hear of our fishermen only when they are apprehended and locked up and often shot at for doing what their DNA has trained them to do, namely, follow fish instinctively as they follow plankton unblinkingly. Fish are stateless, fishermen restless. Fishing on the high seas is one of the most instinct-driven livelihood avocations of human civilisation. We should devise a system where trespassing by fishermen becomes impossible by definition.

Sarojini Naidu’s “The Coromandel Fishers” has this exquisite line: Row, brothers, row to the edge of the verge, where the low sky mates with the sea.

Not a flaky consanguinity, but a frank friendship can keep the touching distances between India and Sri Lanka connected. We are a distinct people, but a connected peoplehood; a distinct citizenry, but a connected civilization. This is no romanticism but a hard anthropological, historical, cultural, civilisational, political fact.