Shedding differences among different formations of activists in Tamil Nadu, the student groups came together on Saturday to protest against the newly elected BJP government inviting the president of genocidal Sri Lanka, Mahinda Rajapaksa, to the swearing in ceremony of the Prime Minister Elect Narendra Modi, amidst strong opposition from the Tamil Nadu State Government and the opposition against the invitation. The latest justification given by BJP spokesperson Nirmala Sitharaman has irked the entire Tamil Nadu, the protesting students who courted arrest told TamilNet. In fact the first protest against the newly elected BJP government in India has emanated from Tamil Nadu, the students added. The organisers also said that a protest was planned by several social organizations on the 26th of May in Chennai as well as other places against BJP inviting Rajapaksa. 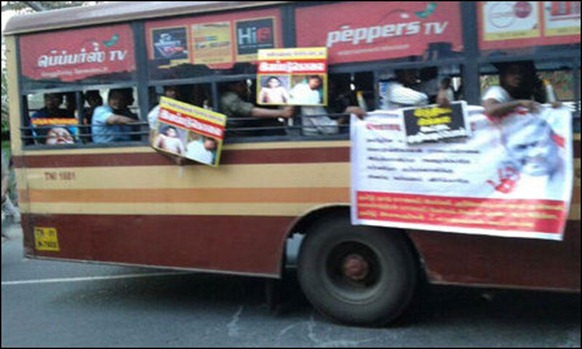 Whatever hope there might have existed pertaining to the BJP taking a strong stand against genocidal Sri Lanka regarding the Eezham Tamils and the Tamil Nadu fishermen if elected to power has now been effectively debunked, the student leaders further said.

Continuing New Delhi’s complicity with Colombo and the apathy towards Tamils in Tamil Nadu and the Eezham Tamils, the BJP has reiterated that it would invite SL President Mahinda Rajapaksa to the inauguration ceremony of the new government.

As a quick response to what the students described as the “arrogance of the Centre” and its brazen decision to override the democratic will of the Tamil Nadu people, several student organizations in the State united to stage what they called a “symbolic siege to the BJP office”. 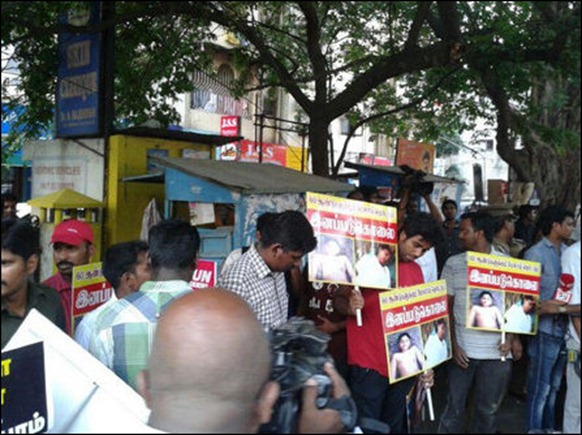 Balachandran students’ movement, the Tamil Youths and Students Federation, Tamil Nadu Students Movement and the Progressive Student Front had come together to stage the protest.

The student activists started to gather near the BJP State HQ in T.Nagar, Chennai, around 16:30 pm. There was heavy police deployment, strategically blocking the entrance and the road that leads to the office.

Soon the police rushed towards the assembled students and encircled them, in the process also ordering empty vehicles to assist in sealing the students off.

Nevertheless they started shouting slogans with their placards in which the Mu’l’livaaykkaal genocide was highlighted and India condemned.

One placard read ‘ what happened in Sri Lanka for 60 years is genocide!”

The police started to detain around 40 student activists among the protesters into a public bus as they continued to protest confronting the police.

A student activist who talked to TamilNet said that the student groups coming together even before the BJP government has assumed office, was a warning to Centre that Tamil Nadu will not stay dormant if New Delhi continued to be an abettor to genocidal Sri Lanka.