The failure of international intellectuals preoccupied with Middle East, Latin America and Russia, in spelling out and highlighting the singular and precarious civilizational paradigm that is currently experimented by world imperialisms through the genocidal State of Sri Lanka, continues to help the ‘eel-diplomacy’ of the State in justifying itself and the agenda of its imperial masters, commented Tamil activists for alternative politics in the island, responding to a recent article by Noam Chomsky. The article by Chomsky this week effectively exposes the US imperialism, but absence of exposure of the ‘Sri Lanka’ model help the State to put on ‘nationalist’ garb to smokescreen the genocidal engineering of imperialism in a paradigm-setting part of the world, the activists said.

Further comments from the Tamil activists for alternative politics:

Chomsky, in his article exposing the working of the US imperialism, was talking on what the USA did to former Soviet Union, present Russia, Cuba, Chile, Panama, Latin America, El Salvador, Israel-Egypt, East Germany, Mexico, Guatemala, Central America, Yemen, Vietnam, Indonesia and touched on Syria, Crimea and even Somalia. On earlier occasions he wrote on Iraq and Afghanistan.

A part of the article was discussing how the USA was working against nationalism in cases such as Chile, Vietnam and Egypt, and generally in the cases of Latin America, Central America and Middle East. Explaining the US support to Saudi Arabia, Chomsky said, “that the U.S., like England before it, has tended to support radical fundamentalist Islam in opposition to secular nationalism, which has usually been perceived as posing more of a threat of independence and contagion.”

Many political observers point out that the national question of genocide-affected Eezham Tamils not being in the radar or priority list of the ‘intellectual imperialism’ of the opinion-making calibre is the curse the Eezham Tamils continue to suffer with.

The genocidal State of Sri Lanka makes the best use of the lacuna, to come out with an ‘eel-diplomacy’ in which it shows ‘nationalism’ and State sovereignty to get the support of the non-US bloc, but fast converts the State into a lascarin military one to serve the ultimate agenda with which the US-led bloc designed and directed the genocidal war in the island.

The weakness of the genocidal Sinhala State that it is prepared to give anything to anybody for not giving anything to Eezham Tamils, and the weakness of the nation of Eezham Tamils that it should continue to look upon the very perpetrators of its genocide, as its case is drowned in the din of issues important to those who ring global alarm bells, are well known to imperialisms that imperceptibly have their ways in the island.

The strategic partnership of New Delhi with Washington in the genocidal solution to the national question of Eezham Tamils is another reason why many intellectuals forget the strategic island where a paradigm setting experiment is taking place to ‘end human civilisation’.

Omission is sometimes the most damaging factor, and Obama in his foreign policy speech last month and Chomsky in his present article make no difference to Eezham Tamils in this respect.

Last month, in a ‘Sri Lanka – Vietnam Friendship Association’ meeting in Colombo, the Communist Party of Sri Lanka, supported the case of Vietnam against China over South China Sea.

Warning Sri Lanka in the meeting, a lawyer Premadasa Dissanayake said that Sri Lanka currently faces a Vietnam-like situation, “where Tamil Nadu state in India, a much more powerful neighbor was making statements about the Kachchathivu islands, where the territory had already been resolved through a treaty,” Lankabusinessonline cited the lawyer.

"If the island is taken by force by India, if they send large ships, we will be in the same situation as Vietnam,” Dissanayake was further cited.

The uninhabited island is in traditional Tamil waters. The genocidal Sinhala military occupying the country of Eezham Tamils has already converted the adjacent island Delft into a half Sinhala one, knocking at the doors of Tamil Nadu.

The Vietnam campaign is another example of the eel-diplomacy emanating from Colombo that also woos Latin America.

The experience of Eezham Tamils is that Vietnam and Israel make no difference to them, as both have forgotten their history in showing justice to the genocide-affected nation of Eezham Tamils.

Perhaps, it is this global trend of States and Establishments that disappoints humanity more than the expected behaviour of US imperialism. The USA is not alone in ‘ending human civilisation’. Discourses may have to transcend confinement to States to do justice to stateless nations, 99 per cent of humanity ruled by one per cent, and discourses may also have to come out of the priorities and preoccupations of the West, the Tamil activists for alternative politics said.

Chomsky’s excellent analysis on the working of the US imperialism should be read especially by the Eezham Tamil diaspora, particularly to ponder why the singular injustice committed on their nation by a US-led mobilisation and continued deception are not making even a mention in a global analysis, and how Colombo successfully seizes the lacuna to pretend itself a crusader of ‘nationalism’ and ‘State sovereignty’ in the eyes of the alternative world, the activists further commented. 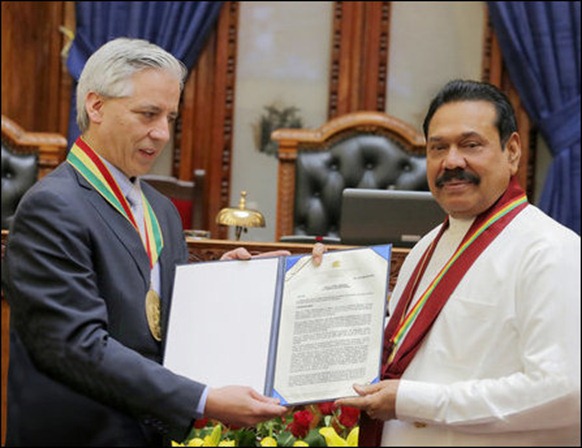