Encouraged by BJP New Delhi’s stand against UN crimes investigation in the island, a Sinhala-Buddhist mob, led by monks, flexed muscles against Tamil rights activists and family members of missing persons, who went to Colombo from the Vanni districts to present their case in a meeting held at a Catholic church at Maradana in Colombo on Monday. The meeting was organised by the Center for Society and Religion and by Inform Human Rights Center and the incident took place in the presence of the US Deputy Ambassador in Colombo. The Tamil victims who went to present their plight to southerners and diplomats were largely led by Catholic church personalities of the Mannaar Diocese. 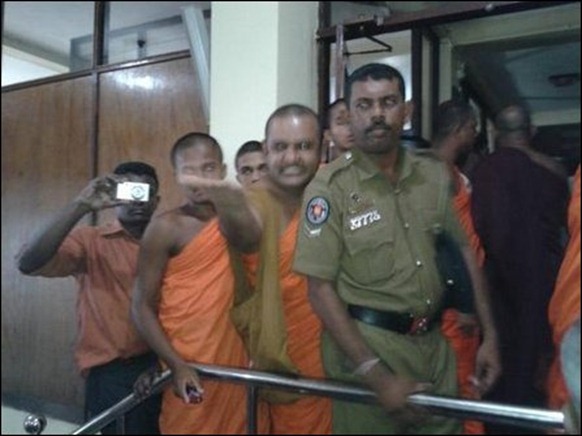 The Sinhala policemen were backing the mob led by the monk

The Buddhist monks accused the Tamil victims of collaborating with external forces against their ‘country’ and said the victims were ‘anti-Sri Lankans’. The monks also shouted that the victims who had travelled from Ki’linochchi, Mannaar, Mullaiththeevu and Vavuniyaa were ‘terrorists’.

Along with the US Deputy Head of Mission, Michael Honigstein, diplomats from the European Union (Britian, France) and Switzerland were present at the meeting when the incident took place.

Five extremist monks led the mob of around 50 thugs. The Sri Lankan policemen who came an hour later, were backing the mob. The meeting was fully disrupted, as the mob was present at the locality for more than 2 hours, said S. Sagayam, the deputy chairman of Mannaar District Citizens Committee.

Around 30 victims, most of them women searching for their husbands reported missing, were taken to Colombo at the invitation of K.J. Brito Fernando, who represents the Collective of the Families of the Disappeared Persons in Colombo, Mr Sagayam told TamilNet.

The organisers had to cancel the meeting and they went to file a complaint as the SL policemen at the venue had failed in their duty, he further said. 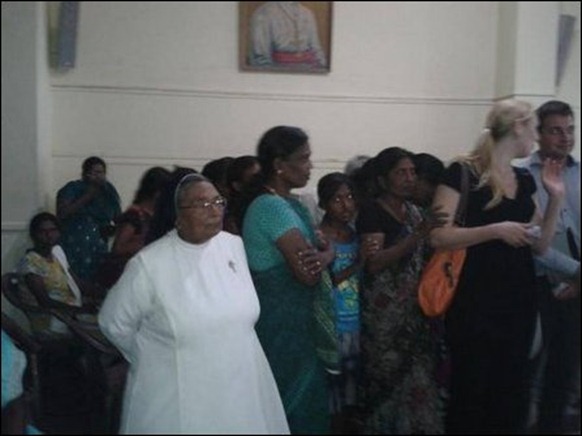 In recent times, the SL military intelligence with instructions from the US-citizen and SL presidential sibling Gotabhaya Rajapaksa, who maintains a close relationship with Pentagon, has been targeting certain US State-department backed programmes involving training workshops for journalists from North, informed sources said.

The Sinhala Buddhist State in the island waged a genocidal war against the nation of Eezham Tamils by getting the complicity of external forces, numbering more than 30 Establishments, mainly Washington, New Delhi and London.

Washington managed to pass an eyewash investigation resolution at the UNHRC in March, which neither recognised the nation of Eezham Tamils and the genocide, nor called for the removal of the occupying Sinhala military through which an on-going genocide is carried out.

BJP ‘geopolitics’ pundits try to present the case as balancing the monopoly of NATO through BRICS.

Whether Washington and New Delhi rarely coming together on the island, as was in the case of the genocidal war, or their cold competition as seen from the 1950s, both invariably bringing in disastrous results is the experience of Eezham Tamils. It is because of the fundamental perception of the two, impelled by imperialist greed, to look at the island as a whole for their acquisition, Tamil political observers said.

Encouraged by a weak UNHRC resolution and by the stand of the BJP New Delhi, Colombo now boldly intimidates all potential sources that could come out with crimes evidences. Colombo’s agents outside work hard in detracting investigation of any kind, citing its futility and branding it as Pro-USA.

Inside the island, the Tamil Catholic Church, especially the Mannaar diocese, is largely targeted with intimidation, political observers said.

The Pope’s proposed visit to the island in January would only serve the forces that try to bailout the genocidal State and its regime in the island, the political observers further said. 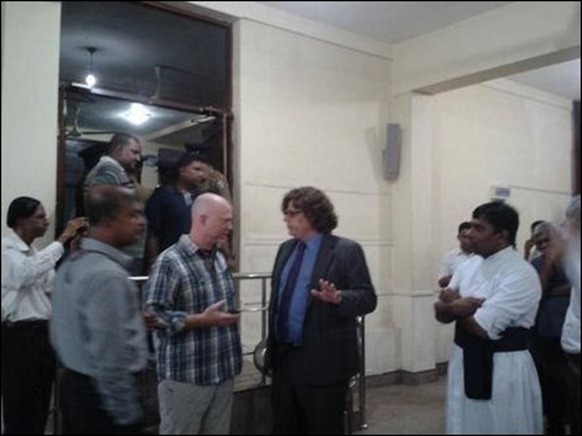 The representatives of the Western missions who were present at the meeting were blamed by monks, mobilised by the SL military intelligence, as supporting ‘terrorists’

On August 4 a meeting that included U.S. Embassy officials was interrupted by angry protesters, including a group of monks. The mob forced its way into the meeting on the grounds of a Colombo Catholic church, where families of disappeared persons from the civil conflict were sharing their stories with civil society groups and members of the diplomatic community. The U.S. Embassy is concerned that the initial reaction of the local police to this disruption appeared to be in support of the mob’s efforts to shut down the meeting, though after discussions with diplomatic officials the police did effectively calm the situation.

The mob shouted hateful slogans, made unfounded accusations, and behaved threateningly towards the families of the disappeared. These protesters were not exercising their right to peaceful protest, but rather were disrupting a peaceful gathering of conflict survivors, including children. The strong impression was that the protesters were seeking to intimidate and silence those in attendance.

The United States strongly urges the Government of Sri Lanka to enforce the rule of law and permit all citizens to exercise their most basic human rights, including freedom of speech and freedom of assembly. We also call on the Government of Sri Lanka take all possible steps to ensure the safety of families who had traveled from the North to attend this meeting, both in Colombo and upon their return home.