An astonishing number of Sinhala Army soldiers in traditional Tamil devotional dress were paraded on the last day of Nalloor temple festival in Jaffna, in a newly found ‘devotion’. The show aimed at subtly ridiculing Eezham Tamils of their religion, intimidating them psychologically and sending them a message that the occupying Sinhala military would even take away the religion from them, news sources in Jaffna said on Wednesday. In various numbers, the Sinhala military has been occupying Jaffna for several decades. But, the newly discovered ‘devotion’ for Murukan has become another weapon of structural genocide to go along with the thousands of houses that are now being built for the occupying Sinhala military personnel and their families, the sources further said.

The Tamil Saivite Murukan temple at Kathirkaamam in the South was captured by the Sinhala-Buddhists over the decades by show of number and intimidation.

They attempt doing this to the Tamil Catholic church at Madu in Mannaar too.

It has now started taking place in Nalloor with the show of the occupying military, commented Tamil devotees who avoided visiting the temple on the festival day.

The genocidal State of Sri Lanka would project the whole show as ‘reconciliation’ and there is a New Delhi and Washington that patronize this military to play second fiddle to the claim, the devotees commented further.

Thousands of Sinhala soldiers belonging to the 51 and 52 divisions of the occupying SLA were brought in vehicles and made to walk in a 4 member row. Some of them also carried decorated Kaavadies. 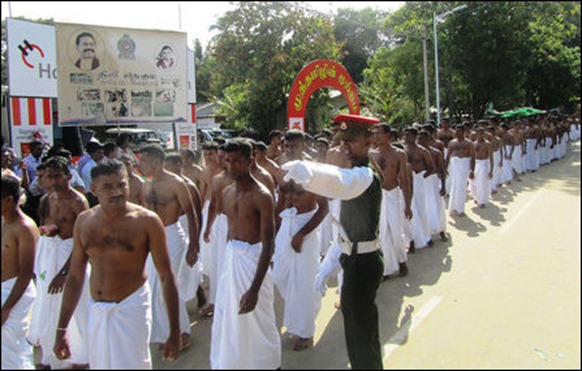 More than 40,000 Sri Lankan soldiers are occupying the Jaffna peninsula alone, according to Tamil sources. The SL State is waging a false propaganda that it has reduced the figure to 18,000.

In the meantime, the SL military is hurriedly constructing thousands of clustered houses inside the Sinhala Military Zone (SMZ) in Valikaamam North permanently seizing the lands from Eezham Tamils who have been uprooted from their houses, fertile agricultural lands and rich fishing beds in their coast, that were occupied and demarcated earlier as ‘High Security Zone’.

Informed sources told TamilNet this week that around 8,000 clustered-houses have been completed within the SMZ. Arrangements are also under way to construct more 7,000 houses. 15,000 families of the occupying SL soldiers are to be settled inside the SMZ creating a township. Plans are afoot to construct schools and other infrastructural installations, the sources further said.

A recent study of Satellite imagery undertaken by the Washington-based Geospatial Technologies and Human Rights and Law Program of the American Association for the Advancement of Science (AAAS) at the request of the ‘Sri Lanka Campaign’ advocacy group, has also verified the new ‘residential type’ structures being built inside the Sinhala Military Zone. ‘The most obvious change was a dramatic increase in housing-style structures, particularly between 2011 and 2014,” noted the report issued by the AAAS earlier this month. The report has also documented cultivation and other institutional changes being made inside 18 identified installations in the military zone. 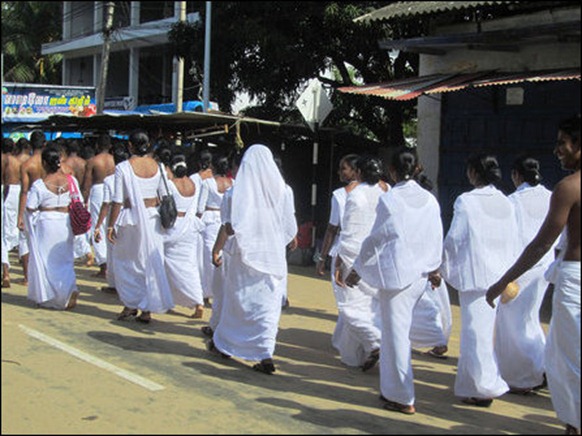 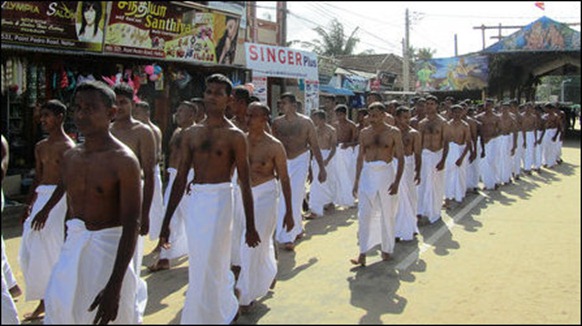