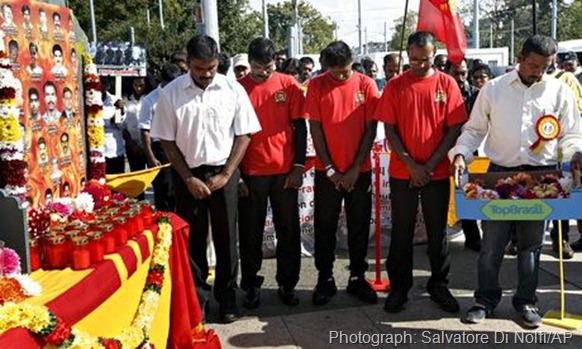 The UK continues to deport Tamils seeking political asylum to Sri Lanka, despite strong evidence that the security forces systematically use torture against those suspected of dissident activity five years after the end of the country’s civil war.

A new report by the Freedom From Torture advocacy group, based on medical evaluations of victims, found that many were subjected to branding and two thirds of those examined suffered rape or other sexual torture. The report, which has been submitted to the UN’s human rights committee in Geneva, suggests there has been no let-up in the use of torture of those suspected of links with the Tamil Tigers, despite the decisive defeat of the rebel group in 2009.

Nearly three dozen of the torture victims were Tamils living in the UK who were picked up by Sri Lankan security forces while on visits home to see friends and family. Despite this evidence, the Home Office continues to carry out fast-track deportations back to Sri Lanka of Tamil asylum-seekers who show evidence of having been tortured.

“The removals are in full force. There is an increase of the refusals of Sri Lankan asylum claims in the last couple of months,” said Kulasegaram Geetharthanan, a London lawyer who represents many Tamil asylum-seekers. He said the pace of removals appears even to have been stepped up. “I have to be in court almost every day, unusually.”

The Home Office policy conflicts with a high-profile Foreign Office initiative – launched in June by former foreign secretary William Hague and Angelina Jolie – to campaign against the use of rape as a weapon of war.

Juliet Cohen, Freedom From Torture’s head of doctors who was involved in the drafting of the FCO’s protocol for preventing and documenting sexual violence, said that among 90 recent victims of torture at the hands of the Sri Lankan security forces, (almost all Tamils) a significant majority were raped or endured other forms of sexual abuse. The report includes 40 new cases reviewed by Freedom From Torture’s medical team from November 2013 to August this year. The UK-based group said that last year more torture victims from Sri Lanka were referred to it for care last year than from any other country.

Sri Lanka rejects accusations that it uses systematic torture against prisoners. It has denied visas to investigators from the UN’s office of high commissioner for human rights, which is due to report on Sri Lanka on Wednesday.

“The key message is really clear. Torture is ongoing and has real prevalence in Sri Lanka, particularly directed at Tamils,” Dr Cohen said. “Sixty-five per cent of the group are disclosing sexual assault of some kind, and we have to bear in mind that without doubt a proportion of the victims would not disclose sexual abuse.”

“We are very concerned that people with UK visas have got back to Sri Lanka to see family or attend a wedding and within days of return they are picked up and tortured. They have been shown photographs of themselves attending demonstrations against the Sri Lankan government in this country and then, while they are being tortured, they are told identify others in the photos.”

Of the UK-residents Tamils detained and tortured when they visited Sri Lanka in 2013, almost half were picked up at the airport on arrival, and almost all the rest were seized within a few days.

In nearly three-quarters of the 90 cases documented in the new report, “clinicians documented evidence of scarring caused by burning from lit cigarettes and/or heated metal objects such as metal rods. In a small number of instances, a caustic substance such as chilli powder (or an unknown caustic substance) was reported to have been forced into the eyes or onto the skin of detainees.”

One of the Tamils facing imminent deportation from the UK back to Sri Lanka, has multiple scars on his back consistent with having been branded with a hot rod. Juvarajah Kunarethinam, a 29-year-old Tamil refugee, said he was press-ganged into joining the Tamil Tigers in 2002 but was allowed to leave after he broke his arm in training. In 2006 he was abducted by a pro-government Tamil unit called the Karuna group that subjected him to beatings for 10 days, during which time his captors demanded information about his elder brother, a Tamil Tiger member. Then in 2009 he was detained again, this time by the army, and held in prison for two months, during which time he was threatened with execution, beaten, punched and branded with a heated metal rod. A medico-legal report from 2012, found his scars were “highly consistent with the history of a burning hot instrument being used in an assault to the client’s back.” The report also said that Kunarethinam was withdrawn, suffered chronic headaches and had great difficulty sleeping because of flashbacks from his torture. The report said: “it is highly likely he is suffering from trauma related mental health problems and this would be highly consistent with the given history of torture and ill treatment in his home country.”

Kunarethinam’s bid to appeal against deportation was rejected earlier this month. When asked for the reasoning behind the decision, the Home Office said that it does not routinely comment on individual cases.

“What I think stands out in Sri Lanka is a culture of impunity,” Dr Cohen said. “We see victims from many countries around the world but what we see in the Sri Lankan group is that not only is the torture very brutal, the victims are often disfigured with obvious scars. There is no attempt to hide this by his interrogators. They are not expecting anyone to hold them to account for this.”

Cohen added: “It’s particularly tragic to see one of the victims of Sri Lankan torture from 20 years ago who is still recovering and then to see people tortured in 2013 who may never recovered. Nothing has changed.”