Liberation Tigers of Tamileelam (LTTE) officials on Wednesday said that 130 Sri Lanka Army (SLA) soldiers were killed in the multi-front offensive push by the SLA in Ki'linochchi on Tuesday. More than 300 soldiers were wounded in the heavy battle that raged throughout the day till 4:00 p.m. on five main localities and along a wide stretch of the frontiers in Ki'linochchi. Meanwhile, in Ki'laali, 40 SLA soldiers were killed and more than 120 sustained injuries. 36 dead bodies of the SLA soldiers have been recovered so far, 28 in Ki'linochchi and 8 in Ki'liaali, in the clearing missions following Tuesday's fighting. There are young recruits of the SLA, including child soldiers, engaged in the front by the SLA in Ki'linochchi. 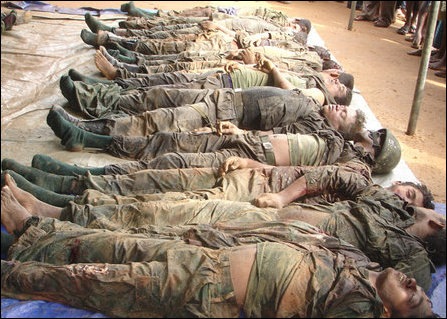 Photographs of the dead bodies of the Sri Lankan soldiers, recovered by the LTTE, has lately exposed Colombo's use of fresh recruits from the south in the intensive battle front in Ki'linochchi. The latest photo has also revealed that Colombo is victimising Sinhalese children in its offensive front in Vanni.
10 dead bodies of the SLA soldiers were recovered by the Tigers Tuesday evening. 8 more bodies were recovered later and 6 further recovered Wednesday morning. 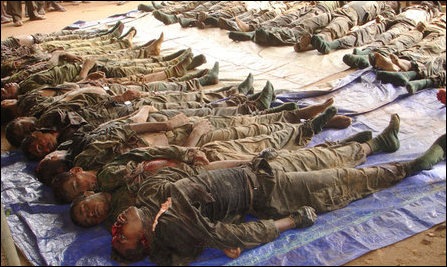 The Tigers said they have seized several weapons in the clearing mission.
There was still exchange of gunfire and minor clashes that continued in Malaiyaa'lapuram and Kugchupparanthan areas according to the latest update Wednesday morning.


The army has also suffered heavy casualties in the Jaffna front at Ki'laali where it launched an offensive push in the early hours of Tuesday amid heavy rain. There were more dead bodies lying between the LTTE and SLA defence lines, according to the latest updates from Ki'laalli front.