The occupying Sinhala soldiers at Ellaang-ku’lam camp in Uduppiddi in Vadamaraadchi brutally assaulted a 29-year-old father of three from the same village Saturday evening around 5:15 p.m. The victim, Selvaratnam Jegan, was admitted to the Valveddiththu’rai (VVT) Hospital with serious injuries. The SL military on Sunday threatened the family not to reveal the news to media and exerted pressure on the hospital administration to send the injured patient home, news sources in VVT told TamilNet. The SL military camp at Ellang-ku’lam has been a notorious place for torture. 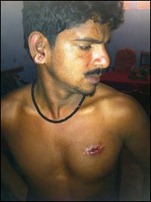 The Tamil youth in Ellang-ku’lam had set up a football playground after purchasing the land from a private owner for 4 million rupees.

After the Tamil youth had launched their football ground, named as Newton football ground, the occupying SL military seized a section of it for the use of Sri Lanka Army (SLA) soldiers. The two football playgrounds were operating in parallel.

On Saturday, both the Tamil youth and the SL military were playing football in the two separate sections. When, a Tamil player, Mr Selvaratnam wanted to pick up the ball that had reached the military section of the ground, the SLA soldiers got into a dispute with him and chased him away from the playground. Selvaratnam left behind his motorbike.

As the news reached the public, the SLA has threatened the family not to release details to media. The SLA was exerting pressure on the staff at VVT hospital to send the injured victim home in an attempt to conceal the episode.

The camp of the SL military is situated at the site where Tamil Eelam Heroes Cemetery existed earlier. The occupying Sinhala military demolished the Heroes Cemetery (Maaveerar thuyilum illam) in 2007.