Pope Francis on Wednesday paid a pilgrimage to Madu shrine, which is the famous pilgrim centre of Tamil Catholics, where even the Sinhalese Catholics of the western coast, who were Tamils a century ago, flock in for festivals. “No Sri Lankan can forget the tragic events associated with this very place, or the sad day when the venerable statue of Mary, dating to the arrival of the earliest Christians in Sri Lanka, was taken away from her shrine. But Our Lady remained always with you. She is the mother of every home, of every wounded family, of all who are seeking to return to a peaceful existence,” the Pope said. Tamils who came in large numbers from all parts of the island appreciated his call for ‘truth’ in making peace. They also appreciated his call for harmony without forsaking the identity of the peoples, whether ethnic or religious. 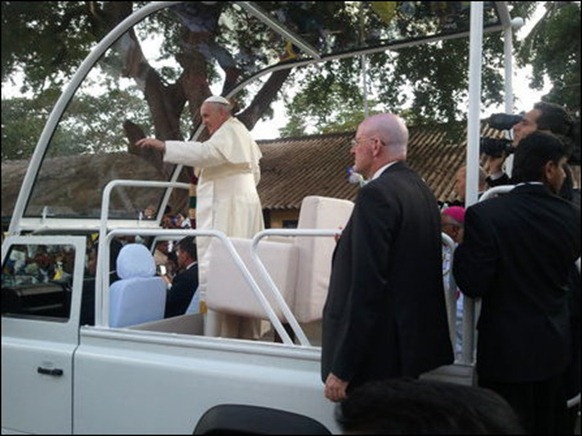 Earlier, on Tuesday, when Pope Francis was welcomed by the newly elected Sri Lankan President in Colombo, the visiting Pope urged the SL President to seek reconciliation and truth. “The process of healing also needs to include the pursuit of truth, not for the sake of opening old wounds, but rather as a necessary means of promoting justice, healing and unity,” Pope Francis observed.

The Pope told a gathering of inter-religious leaders on Tuesday: “Men and women do not have to forsake their identity, whether ethnic or religious, in order to live in harmony.”

Pope Francis visited Madu on Wednesday after the canonization of Blessed Joseph Vaz as the first saint of the island at Galle Face. Religious dignitaries from all faiths were invited to the event, which was attended by thousands of people. 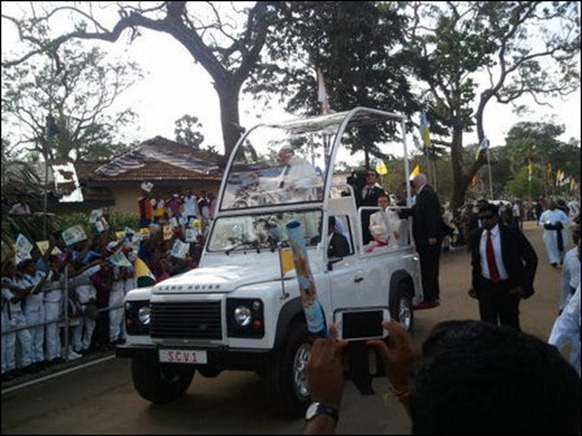 When he visited Mannaar on Wednesday, the Pope was making frequent stops to bless the people who were standing along the one km way from Thadchana-Marutha-Madu, where he landed in helicopter, till he reached the Madu Shrine.

Around 600,000 people, both Tamils and Sinhalese, visited Madu on Wednesday, according to Sri Lankan police officers.

Most of the Sinhala Catholics, who make pilgrimage to Madu, were Tamils three or four generations ago. They come from the coastal areas of Northwestern and Western Provinces. All along the western coast, up to Colombo, there were traditional villages of Tamil Christians.

On Tuesday, kith and kin of missing people in North staged a demonstration in Vavuniyaa urging the visiting Pope to address their plight with the Sri Lankan State. They joined the visitors to Madu on Wednesday.

In the meantime, Sinhala school children were sent with some Sri Lankan flags from North Central Province.

Catholic priests talking to TamilNet said both Vatican and Colombo were very keen in maintaining the visit as a religious pilgrimage. The Mannaar Diocese was under pressure not to give any particular space for victims of the conflict seeking justice for their missing kith and kin.

Five selected disabled people were individually blessed by Pope Francis at one of the last rituals at Madu on Wednesday.

The Sri Lankan military and police were deployed in large numbers making a subtle claim that it was the Sri Lankan government, which was behind all the arrangements. The SL policemen were also marking each visitor entering the Madu Shrine with a unique number tag.

Parliamentarians, chief ministers of Northern and North Central Province, government officials and people belonging to all walks of life were kept at a distance away from the stage where Pope Francis addressed the gathering.

The address was translated into Tamil and Sinhala. ‘Sri Lanka’ was cited as ‘Ilangkai’ in the Tamil the Tamil translation. 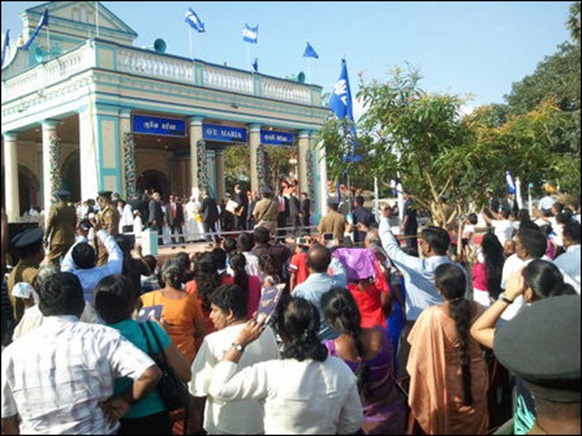 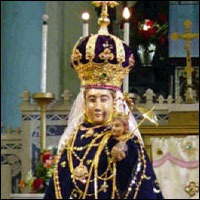 Our Lady of Madu

The origin of the icon of Our Lady of Madu, go back to the times of the advent of Catholic Christianity in Mannaar.

Contrary to the impression of many, Christianity hasn’t come into Tamil heritage with the advent of the Portuguese. It had come long before, almost at the time of the birth of Christianity in West Asia. It made an impact and survived in the old Tamil society, the descendents of which are the Syrian Christians of Malabar.

Also Read: 03.04.2008 The temporal and spiritual conquest of Tamils: Mahinda’s book of dreams

Full text of the address by Pope Francis at Madu follows:

We are in our Mother’s house. Here she welcomes us into her home. At this shrine of Our Lady of Madu, every pilgrim can feel at home, for here Mary brings us into the presence of her Son Jesus. Here Sri Lankans, Tamil and Sinhalese alike, come as members of one family. To Mary they commend their joys and sorrows, their hopes and needs. Here, in her home, they feel safe. They know that God is very near; they feel his love; they know his tender mercy.

There are families here today which suffered greatly in the long conflict, which tore open the heart of Sri Lanka. Many people, from north and south alike, were killed in the terrible violence and bloodshed of those years. No Sri Lankan can forget the tragic events associated with this very place, or the sad day when the venerable statue of Mary, dating to the arrival of the earliest Christians in Sri Lanka, was taken away from her shrine.

But, Our Lady remained always with you. She is the mother of every home, of every wounded family, of all who are seeking to return to a peaceful existence. Today we thank her for protecting the people of Sri Lanka from so many dangers, past and present. Mary never forgot her children on this resplendent island. Just as she never left the side of her Son on the Cross, so she never left the side of her suffering Sri Lankan children.

Today we want to thank Our Lady for that presence. In the wake of so much hatred, violence and destruction, we want to thank her for continuing to bring us Jesus, who alone has the power to heal open wounds and to restore peace to broken hearts. But we also want to ask her to implore for us the grace of God’s mercy. We ask also for the grace to make reparation for our sins and for all the evil, which this land has known.

It is not easy to do this. Yet only when we come to understand, in the light of the Cross, the evil we are capable of, and have even been a part of, can we experience true remorse and true repentance. Only then can we receive the grace to approach one another in true contrition, offering and seeking true forgiveness. In this difficult effort to forgive and find peace, Mary is always here to encourage us, to guide us, to lead us. Just as she forgave her Son’s killers at the foot of his Cross, then held his lifeless body in her hands, so now she wants to guide Sri Lankans to greater reconciliation, so that the balm of God’s pardon and mercy may bring true healing to all.

Finally, we want to ask Mother Mary to accompany with her prayers the efforts of Sri Lankans from both Tamil and Sinhalese speaking communities to rebuild the unity, which was lost. Just as her statue came back to her shrine of Madu after the war, so we pray that all her Sri Lankan sons and daughters may come home to God in a renewed spirit of reconciliation and fellowship.

Dear brothers and sisters, I am happy to be with you in Mary’s house. Let us pray for one another. Above all, let us ask that this shrine may always be a house of prayer and a haven of peace. Through the intercession of Our Lady of Madu, may all people find here inspiration and strength to build a future of reconciliation, justice and peace for all the children of this beloved land. 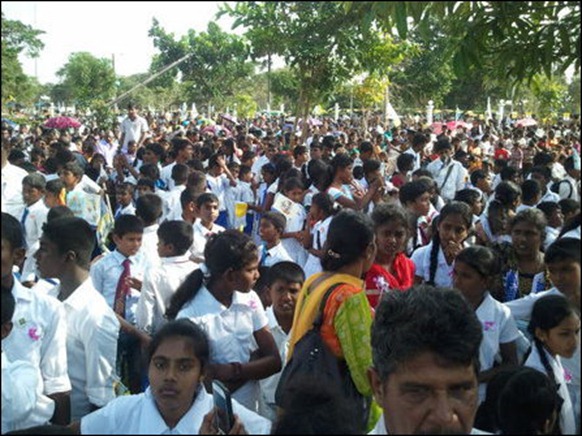 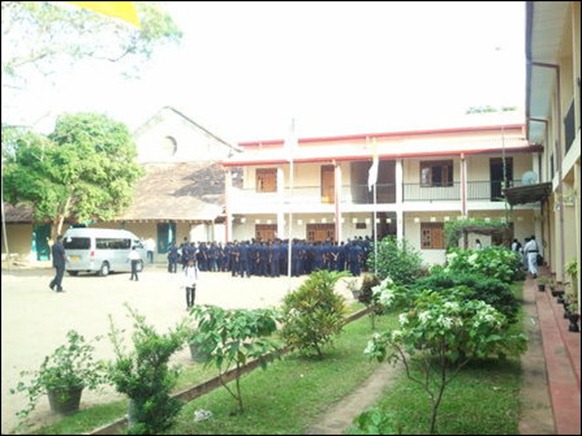