Governments may come and go, but the State of Sri Lanka gets strengthened in its genocidal project whether there is war, peace or talk of ‘change’, comment the resettled women of Mu’raa-oadai village, situated 5 km south of Vaazhaich-cheanai town in Batticaloa district. 400 houses have been destroyed. Two temples are damaged. Almost all the resettled families are women-headed households, poorest of the poor. The women of the village say: “It is only when we have permanent security from future genocide, we can breath the air of freedom.” The SL military has vacated last year from the village. But, a Buddhist statue and a ‘sacred’ Bo tree are still threatening the villagers who are haunted by the mere existence of the symbols of structural genocide.

Mu’raa-oadai was completely destroyed after facing a brutal onslaught of genocide between 1985 and 1995.

Following the Ceasefire agreement between the Colombo government and the Tamil Tigers in 2002, the village was secured back for civilian resettlement.

Even after the Eastern Province was fully seized by the SL military in 2007, the Sri Lankan State continued its genocidal occupation of the village till the last year.

400 houses and two Saiva temples have been destroyed.

The Sinhala military has exploited whatever remained in the village. Almost all the families are women-headed households.

“What we got during the past years for our so-called resettlement was only 12 sheets for roof and 8 bags of cement to the construction of our houses,” A. Krishnamma, who lost her husband in the war told TamilNet. 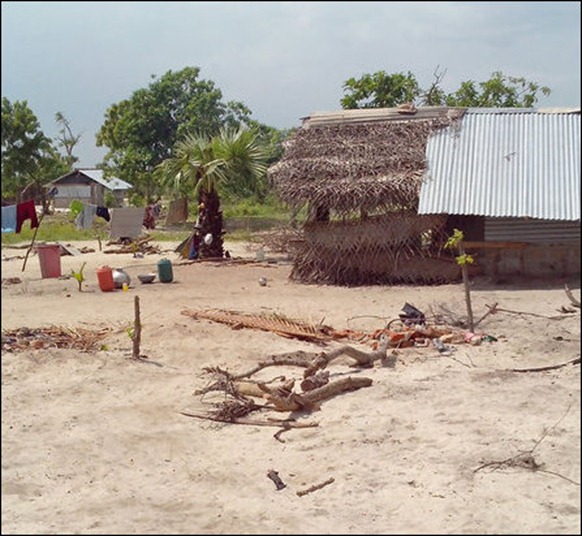 The ‘resettled’ hut of Mrs Krishnammaa, who is a mother of two

Apart from the Buddhist temple and the Bo tree standing as the threatening symbols, the wild elephants brought from the jungles of South into the jungle in the Eastern province enter the village killing people, the villagers say.

“There is no potable water. There is no electricity. Dark jungle. But, it is our land. It was where my house was situated. So, I am staying here. We were living here for ages. It was here my mother was living. She was shot and killed by the Muslims. The Indian military that entered into our house shot and killed my husband. Later, we were displaced. For years we were living on the other side close to our village. I came back as I wanted to come to my house in my land. Karuna Ammaan [defected from the LTTE and became a paramilitary with a minister post in the SL government] came with a promise that he would give us a tube well. But, nothing of that sort happened,” Krishnamma says.

“Before the destruction, we lived here without flooding. But, now we are also affected by flooding, as the Sri Lankan military which was stationed here had dug out sand from our lands. Most of the houses were heavily flooded. It never happened in this way before,” she complained.

“It is said there is a new President elected with the promise of change. Will that happen?,” she questioned.

“Our immediate need is potable water, electricity and resumption of livelihood. We will wait and see what happens,” she added.

“We left behind all our goods at the house when we were chased out of our village. When lived here, there were five coconut trees. Now, everything is gone. The environment is gone. Our village has become a desert land.”

As genocide and structural genocide are in the ideology of the State in Colombo and the Powers that back it, unless there are fundamental changes in people of the land having their State, the decades of the resettlement, rehabilitation experience of Eastern Eezham Tamils is not likely to change, commented social activists having long familiarity with the region.