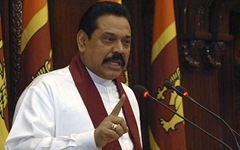 Sri Lanka’s populist president is a self-styled "man of the masses" and one of South Asia’s most controversial leaders.

Since his narrow election victory in 2005, Mahinda Rajapaksa has dedicated himself to the cause of defeating the Liberation Tigers of Tamil Eelam (LTTE) by military means.

He opposed moves towards peace made by Sri Lanka’s previous government on the grounds that too much was being given away to the rebels.

Talks brokered by Norway had made significant progress towards reaching a settlement based on a federal Sri Lanka, with significant autonomy – although not a separate state – for the largely Tamil north and east. A ceasefire was agreed in 2002 and, for a few years, a lasting peace seemed possible.

But Mr Rajapaksa, whose political heartland is the largely Sinhalese south, believed the terms on offer amounted to a division of the island. When the LTTE broke the ceasefire in 2006, the president seized his chance to respond with force.

Last January, he withdrew from the ceasefire and launched a general offensive. Mr Rajapaksa, who combines the roles of president, commander-in-chief and defence minister, aimed to recapture territory in northern and eastern Sri Lanka that the rebels had controlled for decades.

The army has benefited from a doubling of its budget since 2006 and is far better armed and trained than the Tigers. Consequently, its offensive has been largely successful and the rebels have lost a series of strongholds. If the fall of Kilinochchi is confirmed, it would probably amount to the LTTE’s heaviest defeat since the onset of the war in 1983.

Day by day, the Tigers are ceasing to be a rebel movement that actually controls and administers territory. Instead, they are being rolled back remorselessly. Even if they are driven from their strongholds, however, the fighting may not end. The LTTE would still have the option of reverting to classic guerrilla warfare.

However successful it may appear, Mr Rajapaksa’s military offensive is unlikely to impose a lasting peace. When his forces capture Tamil territory, they could be seen as an occupying army by civilians. Almost 10 per cent of Sri Lanka’s 21 million people are Tamils.