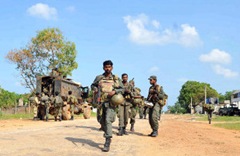 To describe Kilinochchi, the administrative and political headquarters of the LTTE which fell into the hands of the Sri Lankan military on Friday, as a “ghost town” is an understatement.

It is a town without a soul, roofs, windows and any conceivable civil and administrative infrastructure. For a bustling town that is home to an estimated 1,00,000 people, the destruction left behind presumably by the fleeing Tiger cadre as the military advanced is to be seen to be believe.

The Army officers and soldiers who marched into the town early Friday were shocked to discover that asbestos roofs, doors, windows and all conceivable fittings of every house and establishment in the town had been ripped apart and carted away.

The civil and administrative apparatus had been razed to ground. The 40-feet long city’s main water supplying tank was reduced to pieces with powerful explosives. The wires which supplied power had been slashed across the city and through the 8-km length of the town not many electric polls were seen.

“What is happening in Gaza is nothing compared to the devastation caused by the Tigers to Kilinochchi,” an Army officer told The Hindu.

Besides the damage to the infrastructure, the biggest concern of the government is about the fate of the citizens of Kilinochchi. Going by even accounts of the LTTE, the civilians had fled much before the military reached there.

Jagat Dias, General Officer commanding the 57 Division which along with the 58 Division laid siege to the citadel of the Tigers, told a group of visiting foreign and local journalists that weeks before Kilinochchi fell the Tigers had ordered the civilian population to move towards Mullathivu, its last remaining stronghold.

Barring a group of 30 civilians who turned up in the town on Sunday and have been sheltered at the local hospital, there is no trace of the rest of the citizens. Amid the bustle of military trucks and movement of men in uniform, the only trace of life in the town is stray dogs and cows.

“We believe the civilians of the town have been forcibly shifted out by the LTTE. However, as our march towards Mullathivu progresses and we zero in on the hideouts of the LTTE top brass in the thick jungles the civilians would have the confidence to return. We have seen this happen earlier in Jaffna in the mid-90,” said Lt. Gen. Dias.

The morale of the officers and soldiers of the Army appears high and there were no signs of tension on their faces as they go about consolidating their grip over the town. An estimated 30,000 soldiers are deployed in and around Kilinochchi and a large number of them are engaged in the process of inch by inch verification of the town to ensure that the place is free of booby traps and land mines.

A section of the military that descended in Kilinochchi is marching towards the strategic Elephant Pass at the face of the Jaffna peninsula and Mullathivu.

On Sunday, the Task Force claimed to have captured Oddusuddan township.