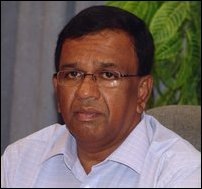 Pointing out that Ki’linochchi was where Sri Lanka military has suffered previous historic debacles, LTTE Political Head B. Nadesan, in an interview with TamilNet on Monday dismissed the occupation of the town as an insignificant setback in the context of a liberation struggle, and said, Tamil people’s support has always been LTTE’s strength, and with the moral backing of the global Tamil community the movement will surmount current and future challenges. "We have taken forward our struggle for more than 30 years, solely relying on the support of our people," and reiterated that the Tigers were spearheading the Tamil struggle, which was based on legitimate political aspirations as defined by the democratic mandate in the elections of 1977.

Full text of the interview follows:

TamilNet: The Sri Lankan president has described the occupation of Ki’linochchi town by his forces as the most honourable victory in the annals of military heroism, what is your response?

LTTE Political Head B. Nadesan: Ki’linochchi town was captured more than once by the Sri Lanka military earlier. Similarly, we have also re-captured the town on earlier occasions, effectively bringing the town under our control to serve the administrative and infrastructure needs. It is in Ki’linochchi, where the Sri Lankan forces have suffered historic debacles.

TamilNet: In a drive to diplomatically isolate the Tigers in future dialogue, Colombo appears to be preparing to hold provincial elections and install paramilitary operatives in the North as ‘elected’ representatives as it has done in the East. What is your message to those who are backing a such move, both from within and outside the island?

Tamil people have clearly defined their political aspirations by the democratic mandate in the elections of 1977. Our movement has been spearheading the struggle since then, fulfilling the mandate of our people and we are the representatives of the people of the Tamil homeland.

The real representation of a nation, which is struggling for its liberation, comes through commitment and sacrifice to the cause as tasked by the people. Our people, as well as the entire global Tamil community are with us. This is our message to those who are embarked on futile exercises to install political puppets.

TamilNet: You have reiterated that the Tigers are committed to cease-fire, even at this crucial stage when the Sri Lankan forces are militarily occupying a vast area of the traditional Tamil homeland. There have also been opinions from a few quarters expressing their backing to Colombo’s agenda of isolating the Tigers. Isn’t this a dangerous trend?

Nadesan: We have faced several major political and military challenges and have successfully withstood those with the support of our people. With the resolute backing of our people and the moral support base of the global Tamil community, we are determined to overcome the current challenges.

TamilNet: Several observers believe that the party that has the will and resources to sustain the war will emerge victorious. What, in your opinion, is the defining factor?

Nadesan: The simple truth is that we have taken forward our struggle for more than 30 years, solely relying on the support of our people. We are certain that the continued support will enable us to overcome current and future challenges.

TamilNet: Tamils accuse the Sri Lankan military of heavily deploying air force bombers, artillery guns and the Deep Penetration Unit (DPU) to target civilians and civilian infrastructure in the war. What measures have you taken to reduce the impact of such attacks by the Sri Lankan armed forces on Tamil civilians?

Nadesan: The Sri Lankan government is waging a genocidal war with cowardly and indiscriminate attacks on innocent civilians. We educate and train the people to take safety measures to shield from sustaining injuries from such attacks. Our people have demonstrated their courage and conviction in facing the genocidal war of the Sri Lankan state.

TamilNet: Despite the closure of Vanni gateways by Sri Lanka, there have been reports of civilians moving from the LTTE side. However, two human rights organisations, the Human Rights Watch and the Amnesty International, have harshly criticized the Tigers, alleging that the LTTE is blocking civilians from moving into SLA controlled territory. Do you want to comment on this?

Nadesan: Our opinion is that these organisations should not base their reports on the one-sided information being supplied by the Sri Lankan government and its proxies. I urge the two humanitarian organisations to visit our territory and independently listen to the views of our people.

TamilNet: Recently a video clip taken by a Sri Lankan soldier using a mobile phone, has surfaced on the Internet, displaying disrespectful treatment of the dead body of a female LTTE fighter killed in action. The Asian Human Rights Commission (AHRC) has expressed serious concern. Many have condemned the behaviour as barbaric and bestial, worse than what occurred in Abu Gharib. Do you have anything to add?

TamilNet: LTTE officials, while providing details to media after the confrontations, have been avoiding details of their casualties. Could you explain LTTE’s policy on issuing casualty figures?

Nadesan: Families of our fallen fighters are always informed within a few hours by the respective Command. Meanwhile, updates to media and the public are released at regular intervals. Tamileelam Heroes Secretariat periodically issues the details of our fighters who sacrifice their lives in the liberation struggle. When issuing clash-specific details to media on a daily basis, our commanders would be naturally concerned of releasing certain details that could be used by the enemy to make dynamic assessments of the military tactics being deployed in the battlefront, coupling the casualty data with time and terrain. Such updates would therefore be handled as militarily sensitive information by the commanders in their communication with media.

TamilNet: It has been reported that the Sri Lanka Army has been deploying child and young recruits in the toughest warfronts in Vanni?

Nadesan: Yes, the Sri Lankan military has been engaged in forced recruitment of Sinhalese children. The Lankan military has also been delivering false promises and guarantees to the children and the young in remote Sinhalese villages. The parents of these youth should be vigilant that their children being subjected to forced recruitment are being sent to wage a genocidal war on Tamils. It is only the upper class in the Sinhala society that benefits from this forced recruitment. The Sinhala upper class doesn’t want to send its sons and daughters to the war front. The peoples of the lower echelons in the Sinhala society should realise this and extend their voice in support of the Tamil struggle. We will always yield our support to the Sinhalese people in their struggles against the oppressive elite of the Sri Lankan state.