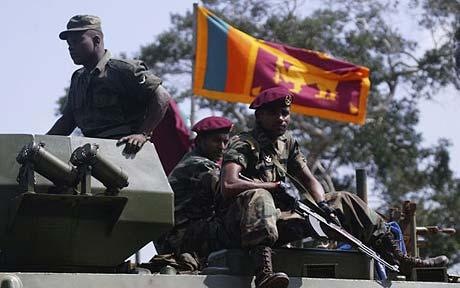 The Sri Lankan government believes it is close to victory over the country’s famous rebel movement – but it may have miscalculated.

If the Sri Lankan president Mahinda Rajapaksa is to be believed, the Tamil Tigers, the rebel movement which inspired a new generation of suicide bombers, are about to be defeated, bringing his country’s 25-year civil war to an end.

In the week since his army captured Kilinochchi, the Tigers’ administrative capital in the north of Sri Lanka, Rajapaksa has made a series of triumphalist claims, including the boast that this key victory was won without a single civilian casualty.

There is no doubting the military significance of the loss of the Tigers’ capital. Since the government abandoned a ceasefire in January last year, it has pushed the Tigers back towards their last strongholds on the far north of the island.

The civilian courts, police forces and the other trappings of statehood enjoyed by the rebels have been abandoned in the face of the government’s relentless advance. And as the Tigers have run for cover in the jungle, their "Sea Tigers" naval force and squadron of "Air Tigers" have had less room for manoeuvre.

Rajapaksa anticipates a final victory and is salivating at the prospect. Earlier this week, he compared his "zero civilian casualty" policy with the bloodshed in Gaza and claimed his main priority was feeding civilians trapped behind Tiger lines, even if it meant feeding Tamil fighters, too. "We are feeding the LTTE [Liberation Tigers of Tamil Eelam]. We won’t keep them hungry," he said.

The Tamil cause and the military campaign for autonomy took off significantly in 1983 when youths from the majority Sinhalese Buddhists in the south of the country savaged their Tamil countrymen in a series of pogroms. An estimated 3,000 Tamils were beaten and hacked to death in retaliation for a Tamil Tiger ambush which killed 13 Sri Lankan soldiers. Remembered as the "Black July" killings, they had the effect of radicalising young Tamil students, who then joined the Tigers and other militant groups in large numbers.

The Tigers became one of the world’s most brutal and successful terrorist groups. They refined suicide bombing to a new martial art, and carried out targeted assassinations of political leaders and attacks on military bases. Sri Lankan President Ranasinghe Primadasa was killed by a suicide bomber on a bicycle at a May Day rally in 1993. Three and a half years before that, former Indian prime minister Rajiv Gandhi was killed by a female Tiger, who detonated a suicide vest at an election rally in revenge for his role in sending an Indian peacekeeping force into the country.

The group’s creation of Sea Tigers, using small speedboats to attack Sri Lankan Navy vessels, is believed to have inspired the al-Qaeda attack on the American destroyer USS Cole off the coast of Aden in 2000. The LTTE is also regarded as one of the world’s most successful illegal fundraising organisations.

Now, with Sri Lankan troops in control of the Tamil capital, the stage is set for the Tigers’ last stand as a conventional military force. They must defend the only part of the island they still control: the Elephant Pass and the jungle coast of the Mullaithivu district.

Rajapaksa may be mistaken if he thinks the war will end quickly, or that crushing Tamil resistance will bring peace to his ravaged country. Diplomats fear the government’s "final solution", focusing on crushing the Tigers militarily, may prove to be the recruiting sergeant dreamed of by rebel leaders and herald a newer, bloodier, insurgency.

As Rajapaksa’s army has pressed north, Tamil civilians have abandoned their homes and followed the retreating Tiger commanders. According to diplomats, they have effectively been taken hostage, and are being as human shields in an attempt to force the army to back off or face a propaganda defeat.

Thousands are believed to have abandoned their homes and some have been forced to move as many as 13 times. Those who stayed put have been forced into government "welfare camps", where they are prevented from working or returning to their lives while they are screened.

As the Tigers prepare for their last stand, diplomats predict a long and bloody battle – LTTE officials knew they would not be able to defend their capital and instead shifted their heavy artillery, planes and armed speedboats to safe areas. They now have nothing to lose and nowhere to run.

Sadly, there is no plan to transform a military victory into a political peace. An all party committee has failed to produce proposals to address the grievances which sparked the Tamil rebellion, and diplomats fear Rajapaksa’s victory will simply change the nature of the conflict into a more dangerous and unpredictable one in which more civilians and tourists could be caught in the crossfire.