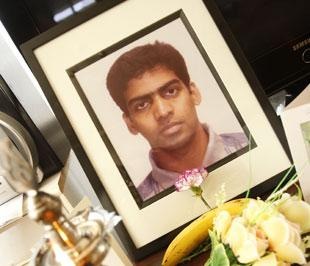 THOUSANDS are expected to attend the funeral of a man who burned himself to death protesting about the civil war in Sri Lanka.

Murugathasan Varnakulasingham, 27, set fire to himself outside the United Nations headquarters in Geneva as a last resort to draw attention to the situation in his home country.

A note was found near his body saying he took this action because the Sri Lankan government is committing a genocide against innocent Tamils in the war-torn Asian country and nobody is taking any notice.

Mr Varnakulasingham, of Grange Avenue, Belmont, left his family on Tuesday, February 10, to fly to the Swiss city to join a protest against the Sri Lankan government’s actions.

His family said he had spent recent weeks constantly watching news of death and destruction in his home country and had become increasingly distressed at the suffering of Tamils.

However, Mr Varnakulasingham never gave any indication of what he was going to do, and he told his family he would be home by the end of the week.

On Friday, February 13, after days of protesting, he poured petrol over his head and martyred himself outside the gates of the UN headquarters.

Mr Varnakulasingham’s family told the Harrow Times they were sad he had died, but also proud that he had helped to save his people from genocide at the hands of the Sri Lankan government.

Mr Varnakulasingham’s funeral is due to be held on Saturday, March 7, at the SKLP Sports and Community Centre in West End Road, Northolt, starting at 10am.

Thousands of people are expected to descend on the funeral from across Britain, and Councillor Thaya Idaikkadar, who is helping to organise it, urged people to leave their cars at home.

He said: “I would encourage anyone thinking of coming to travel by public transport as much as possible because there is only parking spaces for 1,000 people.”