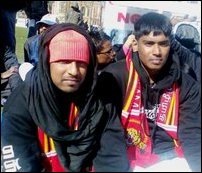 "If the refusal of the Sri Lankan state to mend its ways and the violence it perpetrated have made the Tamil youth of the 1970s to get into militancy, it is the stubbornness of the International Community in not rectifying its blunder of perpetrating a genocidal war against Tamils in Sri Lanka that has now made the diaspora youth to take to streets defying procedures," writes Opinion Columnist Chivanadi. "The older generation which initially raised eyebrows at the outcome of the youth initiative that defied community elders and formalities, has subsequently started appreciating the spontaneous spirit in the youth in taking up community responsibility at a time of emergency. It is the duty of the community elders to take the message to the ruling circles of the IC that its venture in the island without a viable roadmap and responsibilities had led to the crisis.

One of the hopes unfolding for Eezham Tamils in recent days is the uprising of the diaspora youth, demanding solution to the plight of their kith and kin at their home country.

The spontaneous youth demonstrations that started in London, Paris and Oslo have fast picked up in several other countries across the world.

Teenagers and even kids with their parents are seen enthusiastically participating in these non-stop demonstrations.

An older generation person in London, after visiting the demonstration site, remarked that she was remembered of her younger days, when as teenagers they were agitating against state chauvinism in Ceylon, against the constitution of 1972 and were demanding a federal solution.

The older generation which initially raised eyebrows at the outcome of the youth initiative that defied community elders and formalities of seeking government permission etc, has subsequently started appreciating the spontaneous spirit in the youth in taking up community responsibility at a time of emergency.

The intense awakening of the youth to the issues faced by their society was clearly evident in the way they were arguing their case with state officials and politicians, said an academic commenting on the talk between the representatives of the demonstrators and the Norwegian government, Wednesday.

Every generation has to experience its own revolution to facilitate social progress. Any generation that hasn’t spearheaded its own uprising for social cause will only bring in degeneration to that society.

Whatever one may say about the aims and outcome of the Cultural Revolution of China, Mao had made a point at that time in stressing the need of the younger generation seeing a revolution of its own.

It is the urban culture of today that designates teenagers as kids. All the international legislations in this respect are actually made by urban cultures for the sake of urban cultures.

Sometimes back, seniors of a South Asian country, where youth are regarded as full adults at the age of 15 by traditional laws, lamented that international agencies by insisting implementation of universal laws, made their matured youth to be treated as mere kids and thus have spoiled the traditional mechanism of responsible social formation.

It is not unnatural to see the younger generation coming forward whenever a society is in stress. The stress gives them the necessary maturity.

The current uprising, in a way, was a result of the youth frustration in the passive dealings of their elders with governments that perpetrated and continue to abet a brutal war against their people in the home country, after designating any supporter of the oppressed party as a ‘terrorist’.

The large presence of women and young girls was another noteworthy feature. Many of them felt that it was a great relief for them to participate in the demonstration than facing the trauma alone at home.

We used to cry at funerals. We are here to collectively cry for the mass massacres of our blood relatives and demand justice, said the participants of the Paris demonstration.

What are the youth going to achieve in convincing the IC that too by defying procedures, was the murmur of some elders. These today’s elders were smirking of the Federal Party – TULF generation of the 70s, which said ‘farming by youth will not bring home the yield’ (Chi’ru pi’l’lai vea’laa’nmai veedu vanthu searaathu).
If the refusal of the Sri Lankan state to mend its ways and the violence it perpetrated have made the Tamil youth of the 1970s to get into militancy, it is the stubbornness of the International Community in not rectifying its blunder of perpetrating a genocidal war against Tamils in Sri Lanka that has now made the diaspora youth to take to streets defying procedures.

It is the duty of the community elders to take the message to the ruling circles of the IC that the IC’s venture in the island without a viable roadmap and without responsibilities had led to the crisis.

It was a colossus fault on the part of the IC to tilt the balance in the island in favour of the oppressors and leave the war entirely in the hands of a state known for its genocidal potentialities.

If their roadmap was wrong they should change it immediately.

Some IC politicians were heard saying to the demonstrators that why can’t they ask the LTTE to release the civilians. “ They ask this question as though the war is taking place for the control of the concerned civilians and everything will be over once the civilians are moved.

Will those of the IC who say this take the entire responsibility of the civilians until political solution is reached”, asked a youth participating the demonstration.

The mounting anger of the youth is on the adamant refusal of the IC to call off the war.

"Megaphone diplomacy will not suit this conflict," quipped the Norwegian State Secretary Raymond Johansen to the questioning youth of the demonstration Wednesday.

“If they can’t say ‘stop war’ that is an open acknowledgement that they are for the genocide of Tamils”, responded the youth participants of the agitation in Norway.

Colombo responded to the youth agitation by deliberately targeting and shelling a child -care facility distributing milk powder in the safety zone, Wednesday, causing the casualty of nearly 100 children.

The problem with Sri Lanka is not merely the governments. It is the Sri Lankan state that is the main culprit. It has been proven over the decades that this state on its own is incapable of coming out with solutions.

Either it has to collapse or shaken thoroughly, to make a new state or states, resolving the crisis.

The IC has no idea how to deal with this state. Hence, it has opted for the easiest way of abetting subjugation of the oppressed and buttressing the genocidal state.

That is why none of the ruling circles of the IC want to stop the war. That means the war will continue and the armed resistance of the Tamils also has to continue. The Tamils are left with no other option.

The IC blares about ‘post-conflict’ stage, but they have no roadmap convincing Tamils. Their modes operandi seen hither to, hints at only leading to another Biafra.

Therefore, the awakening of the Eezham Tamil youth, especially the diaspora youth, is of utmost importance for the continuity of the struggle for liberation and emancipation. They, on their own, should have a perception of friends and enemies.

Many diaspora parents who were worrying about the identity consciousness of their children are secretly happy to see them coming forward in shouldering the cause. “It is a great relief to me”, said a professional of mental health in Denmark, a father of two teen-aged girls.

Another feature silently appreciated is the tolerance of the system in the Western World, unlike in Sri Lanka, that is secretly recognizing the just cause of the demonstrators and the injustice on its part.

In UK, where carrying the Tamil national flag is not permitted, police personal were seen advising the demonstrators to give the flags to children under 16, so that they can refrain themselves from taking action. That is the public understanding and sympathy coming even from the police personal. But when are their governments going to translate that in action is the question.