Commonwealth leaders are meeting in Trinidad with climate change high on the agenda in the last major summit before the Copenhagen climate talks.

For the first time, a number of other world leaders have been invited to take part in the biennial meeting.

Another key issue will be Rwanda’s bid to join the Commonwealth.

The 60th anniversary Commonwealth Heads of Government meeting in Port of Spain will also discuss the issue of the venue for the 2011 Commonwealth summit – with the UK vowing to block Sri Lanka’s bid.

The global summit on climate change is due to start in Copenhagen on 7 December, and the topic is the only issue on Commonwealth summit’s agenda for the first day.

UK Prime Minister Gordon Brown has described the meeting as "an important springboard towards Copenhagen".

About half of the Commonwealth’s members are island states, many of them threatened by rising sea levels.

Trinidad and Tobago Prime Minister Patrick Manning, who is hosting the three-day meeting, said he hoped the summit could boost momentum for an agreement on carbon emissions at Copenhagen, amid "concerns about the way the negotiations were going".

"We hope to arrive at a political statement that can add value to the process that will culminate in Copenhagen next month… what we can do is raise our voices politically," he said.

The Commonwealth’s 53 nations comprise about two billion people, a third of the planet’s population.

The leaders are meeting days after pledges by the US and China to limit their greenhouse gas emissions, amid concerns that the Copenhagen meeting could fail to agree substantial cuts.

The UK has indicated it will try to block Sri Lanka’s bid to host the next Commonwealth summit over its handling of the recent war. 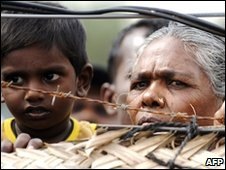 The source said: "We simply cannot be in a position where Sri Lanka – whose actions earlier this year had a huge impact on civilians, leading to thousands of displaced people without proper humanitarian access – is seen to be rewarded for its actions."

The UN estimates the conflict with Tamil Tiger rebels left at least 7,000 civilians dead with 150,000 people still displaced and living in camps.

The summit will also discuss Rwanda’s entry into the English-speaking club.

The Francophone nation has been seeking membership following disagreements with France over events leading up to the 1994 genocide.

The issue is likely to be controversial. The nation’s entry bid has received strong backing from some member states.

However, some rights activists are angry that entry would reward a nation they say is guilty of abuses dating back to the 1994 genocide.

He says most of the leaders apparently believe that if Rwanda is admitted, then they will be able to apply peer pressure to improve the lives of its people.

Zimbabwe’s possible re-entry could also be brought up at the meeting.

At a state dinner ahead of the summit, the Queen acknowledged her hosts by wearing a gown featuring two of the Caribbean nation’s national birds and its national flower.